Act Like a Success Think Like a Success is a mix of autobiography and self help book. It’s very inspirational since Steve really started from low and relatively late.

About The Author: Steve Harvey is a comedian, TV host and a devout Christian. He is also the author of popular dating books for women such as “Think Like A Man, Act Like A Lady” and “Straight Talk, No Chaser”

Steve Harvey can be quite inspirational because he is truly one of those guys who started from the bottom.

He dropped out of school, worked a factory job until he was fired, stayed homeless for almost three years and didn’t get serious about success until he was middle age.
And yet there he did it.

You should build your career -and possibly your life- around what you’re good at.

To know what you’re good at, you need to know yourself and you need to be brutally honest (love reality, says Ray Dalio in Principles).

Steve says you can turn any passion into a well paying job.

My Note:
I don’t fully agree here, though. You can turn many passions into high-paying job as millionaires videogamers can testify. But similar to Seth Godin in Linchpin, I believe some passions are harder to monetize.
So you might at least want to think about that. Just don’t let that stop in your track. Countless “unmonetizable” businesses made millions.

Commit to Your Gift

To reach success, you must not only find your gift, but fully commit yourself to it.

My Note: fully committing to a gift not only is crucial for success, but will also heighten your passion for the gift. Read Grit by Angela Duckworth for more.

Failure is Your Friend

The need to embrace failure is a constant refrain in the self-help literature.

However, “Act Like a Success Think Like a Success” provides some very motivating real life examples that back up the talk with the walk.

People laughed at Harvey when he quit his job to pursue comedy. And he lost every comedy competition he entered. He had some terrible performances in front of big crowds. And he was scared before any big major event.

Yet, he took some big lessons learned from his failures. Harvey started keeping tabs on his jokes. He scored based on the crowd’s reaction and used that feedback to decide what could stay and what should go.

Steve Harvey recommends you don’t find any time for the haters. When you respond and entertain them, you give them power.
And you waste your precious time.

Keep climbing instead, and they will be so far down the ladder you won’t even hear them anymore.

And here is a list of good advice I handpicked: 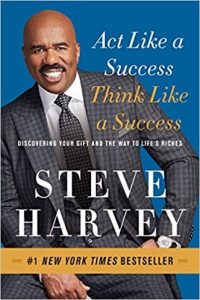 The self help part contains advice which is rather popular and well known in the self help literature (read best self help books).

But the mix of theory plus real life stories makes it better than most self help books. Contrary to some, Steve Harvey isn’t trying to make money selling the advise: he’s already made it to a successful position and then he is giving advise.
Since Harvey did start from very low and he did start late, “Act Like a Success Think Like a Success” was also very inspirational for me.

I would recommend it first and foremost to anyone who likes Harvey, to people who start from humble beginnings and those who’d like to become comedians.