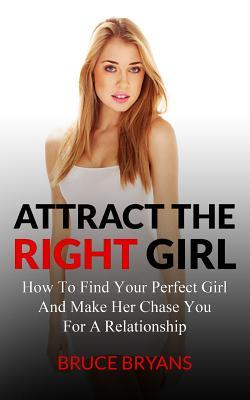 Attract the Right Girl teaches men how to recognize and pick a relationship-quality woman, together with tips and advice on how to become the kind of guy that a high-quality woman wants to be with.

Note:
Albeit this is a dating book for guys, I also add it to dating books for women category because it contains high-quality information to help women become more high-quality “wife-material”.

About the Author: Bruce Bryan is a pseudonym, and he has written many books on dating and relationships. Also from Bruce Bryan, I have previously reviewed in here “Never Chase Men Again“

Don’t Change for A Woman, But Find a Woman Who Complements Who You Are

So think about your life goals, your passions, and your interests, and focus on dating quality women that “fit” with you in those areas.

Again, I couldn’t put it any better than Bryan puts it:

It may seem harsh to be so specific in making a list about what it is you want in a woman, but it’s even harsher to try and make someone else fit your ideal of a “perfect” woman.

Once you know what you really want and you have written it down, stop looking for “the one”, and simply look for who fits the bill.

The Traits of A High-Quality Woman

Bryan says that men enjoy being in charge, and the top women understand that and instead of challenging him, they use “feminine grace” to influence their men.

The graceful woman wants freedom from masculine responsibilities and expectations.

Bryan says there is a difference between “influencing” and “changing”:

Every woman in some form or fashion wants to either change a man to suit her needs, which is bad, or she wants to influence him to become the best version of himself, which is good.

I couldn’t agree more with Bryan.

She also wants her man to be masculine, and she appreciates him for that.

The world can be a challenging place, and a great woman helps the man by providing a great environment in his intimate relationship, which includes both support and loyalty.

A good woman will make you feel as if your presence matters to her.

Since if she truly likes you early on she might be on her best behavior,  notice how she treats the man in her life.

And thoughtful and proactive will know her man and what he likes her.
And she will try to provide him with the environment that he appreciates. That can be shown for example by preparing his favorite dish, or by letting him enjoy football night.

A great woman will make you feel like you are having a positive impact on the world.

My Note: So true
I can’t agree more. One of the best women I’ve been with first asked me about writing a book one day long before that thought had even crossed my mind.
My answer was “who is even gonna read that”.

She will respect your strength and encourage you if you have given your best, even if you fail.

She’ll still possess a childlike zest for life and be an absolute joy to be around.

All the “make you feel good” traits are nice.
But they’re not enough.
You also want a woman who will hold you to the best man you can be. And that includes keeping your word.

Maintaining your integrity as a man should become one of her top priorities in your relationship.
Yes, she might “nag” you, but ONLY if you’re not being the man that she knows you can be.

Finally, among the top qualities, Bruce Bryan lists confidence, competence (being good at what she does), femininity, and taking care of her appearances as well.

How do You Know She’s a Top Woman?

Bruce Bryan says that top women make men want to do things for them.

It’s a strange feeling in which you’ll WANT to take care of her and treat her like a queen.
You’d fight for her if the situation called for it, and you’d gladly make the sacrifices necessary to ensure her happiness.

Half of the book is about recognizing great women, while the other half is in becoming the man who can attract them.

You MUST have high standards for yourself and your woman and low tolerance for dishonesty or lack of integrity from you, her, or anyone else for that matter.

He says that to get this type of high-quality woman you must get into the mindset that you are assessing her and the quality of her character.

The rest of the book contains some advice on dating, like not being a wuss, or having boundaries that you demand to be respected.

In short, Bryan says that to be attractive to a high-value woman, you must be a high-value man (and high sexual value man).
He says:

Chase Each Other: It’s Give & Take

Bruce Bryan says that relationships are a give and take.

He also applies that give and take to chasing, which is the first time I read about.
Bruce Bryan talks about “giving her the gift of chasing you while also chase her”.
This is also something I talk about in “mutual investment“.

How to Make Him Chase You: Definitive Guide

Be Willing to Walk Away

If a woman is not the right fit, if she is not treating you well, and if she doesn’t like you…

It’s not just a behavior, it’s a mindset.
And it’s a mindset that will make you all the more attractive to the high-quality women who do are a good fit for you.

The Caged Bird Paradox: Don’t Give Up Your Freedom Too Easily

When a great woman meets a great man, she’ll want him only for her, and put him in her little cage.

Dating an average woman that isn’t a good match for you or who isn’t highly attracted to you or interested in adding value to your life is actually WORSE than being single.

On seeking women who want the same thing:

Many guys fail to attract the right girl because of fear. They fear being alone the rest of their lives or they fear commitment.

On her unwavering support:

You want to be with a woman that will remain consistent in her support of you regardless of your weaknesses and burdens. In fact, a good woman is one who will help to heal the emotional scars of your past just as you would with her.

On the value of men with high standards:

If a woman can land a guy with high standards, she’ll feel as if she’s won the lottery.

You can’t turn a whore into a housewife. There, I said it.

I  loved “Attract the Right Girl”.
These were the bits I agreed less with:

There is a lot of self-help which is based on telling readers that they are great and that they “deserve” whatever they want.

I never liked that.
It feels like entitled mentality, it does not lead to long-term success, and it makes people inherently low quality.

Same as above. Very common, never believed in it, never liked it.

This book is mostly for men who enjoy a “good woman”, and a woman who will be the queen of the castle.

It’s less for men who want a go-getter or an equal.

That being said, most men fit the former category, and a woman can be both.

Top book.
Almost all of the information in this summary is not only high-quality, but also rare in the dating literature.
Finally, I also personally used Bryan’s list of traits and qualities to help me fill up my own list of traits I seek in a woman.

“Attract the Right Girl” is one of those little hidden gems.

It’s a simple and short book, yet it packs a huge punch.
Contrary to most dating books for guys, its main focus is not on how to meet and seduce women, but on how to filter women.

This is the mindset of men with options, who prefer collaboration, and focus on finding a collaborative partner.
Also see:

Just for that, it deserves a recommendation.

I find that picking the right partner is the most underappreciated aspect of seduction. And, as well, it might be one of the most under-appreciated skills for life.
Part of is because of our PC culture whereby “picking” means “judging”, and these days you don’t wanna judge.
But whatever the reason, don’t miss out on this life-critical skills.
And do focus on picking the right partner.

In many ways, Bruce Bryan here is encouraging readers to pick a partner that will hold her side in what I call “collaborative relationships” in my “fundamental strategies of power“.

Why Are Hillary Clinton's Fake Sm …by Lucio Buffalmano4 hours ago

I started life as an underdog....
748 students enrolled