Home » Conor McGregor Personality: The Traits That Underpin His Confidence 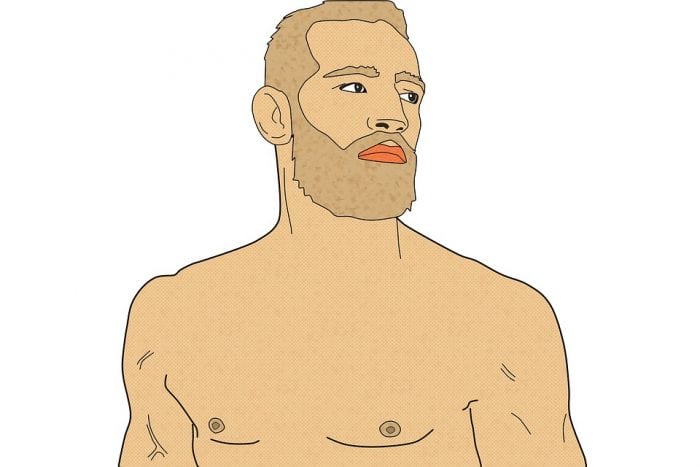 What are the personality traits that make McGregor so successful and grant him so much confidence?

This article is a psychological analysis of McGregor.

It will show you:

McGregor spoke more than once about “learning and growing” and “win or learn” after a searing defeat to Nate Diaz.

He also famously said that “talent doesn’t exist” and that his success is due to obsession.

This is a typical Growth Mindset attitude, and it’s something you can learn, I explain how in this post.

The corollary of a Growth Mindset is that Conor McGregor knows that what allows him to back up and brash-talking is lots of work.

I quote him when he says “don’t confuse the talk, I over-sweat everyone“. Needless to say, Grit it’s key in achieving mastery in anything.

McGregor is convinced the future belongs to him.

That the victories are his.
He is convinced what he says is true, convinced his values are fair and right.
And he is convinced he knows himself and can read people right.

While most people aren’t sure of anything and not convinced they can pull off a simple day at work, McGregor is convinced of everything.

If you want to develop charisma: begin with strong values. Add certitude and conviction in them and in anything else you do.

Then add the pelotas to stand up for all you believe in, and granted you will ten fold your confidence and charisma.

Black and white thinking does not inc you any closer to the truth.

But it does make you more charismatic and more self-assured.

More well read people tend to look down on black and white thinking.
I’m pretty sure McGregor doesn’t care about that :).
But if you read this website you know this is important information to dominate any crowd you’re in.

I don’t necessarily recommend this trait.

Conor McGregor is a huge practitioner of the Law of Attraction.

He believes that what he focuses on and what he believes in will manifest in his life. He says the power is in envisioning, believing and speaking his mental reality.

Napoleon Hill long ago detailed that the Law of Attraction is one of the keys to riches and success.

WARNING:
since there’s a huge craze around the law of attraction these days, I fully agree with DeMarco author of The Millionaire Fastlane.

And he says it’s total BS.

You will not will things into life.
On the other hand, by focusing on the positives you are you more likely to take the steps you need to take and do so in a spirit of confidence.
Which is at big part of success.

McGregor practices gratefulness and often talks about giving back.

Gratefulness has been highlighted as a key mental process by countless authors including, to name a few, Brian Tracey, Brene Brown, Zig Ziglar and Tony Robbins.

It’s been so popular because, well… It does work and I believe it’s a key ingredient in making McGregor a happy bunny.

Shawn Achor, author of The Happiness Advantage makes the case that success does make you happy.

But the opposite is true: being happy will make it more likely that you will be successful.

As Tony Robbins says, we get what we focus on, and focusing on success and positives with Law of Attraction and gratitude helps McGregor to stay positive.

Add success, constant improvement and a wholehearted personality, and you have all the ingredients.

And while happiness is not necessary for success, it can help. And it surely makes for a more enjoyable life too.

McGregor is convinced of being a good human being and well deserving of good things to happen to him.

That might sounds silly, but when we can allow ourselves to be ourselves, we derive immense strength and confidence.

McGregor is fully unashamed of being himself, whether that means being goody, angry, silly or a killer.

Being able to “throw off the mask” and show up usually also can make you happier and more confidence.

As McGregor himself said, he is:

Cocky in prediction, confident in preparation and humble in victory or defeat.

That’s such a powerful approach to life.

Humbleness in victory or defeat will give you the ability to detach from the outcome.

Outcome independence will give you emotional stability and keep you focused on growth, improvement and, ironically, end results.

People like McGregor also because he shows strong ethics and morals.

Conor McGregor said he’s ready to kill, but he also shows compassion towards his defeated opponent. Being able to go full on and switch on and off your morals is a great skill to have.

Tom Bilyeu mentioned that holding two (apparently) different and opposing views at the same time is as a key differentiator in the mindset of successful people.

Conor McGregor is bombastic and brash leading to a fight.

However he never rubs it in after a win and always displays sportsmanship and appreciation for his opponents.

He didn’t want to see the sad face of a beaten opponent and said he “felt it” for a blitz-win on another.

He says that to be great and reach the pinnacle at anything, you have to be a bit “gone” and crazy.

Obsession risks to make you a bit one-sided in life as you develop on a narrow focus and skillset, but if you can stomach the risk of being a one trick pony, it will definitely help you becoming outstanding.

Conor McGregor is one of those athletes who feels and performs at his best under pressure.

This gives him a huge advantage over many (most?) athletes who are instead “trying to calm down” before key events (even Michael Jordan admitted to being nervous before big games).

Conor is supremely skilled in his craft, but you only become a box office record breaker when you can combine mastery with showmanship.

Trash talk, bragging, picking out enemies and rallying crowds is a common virtue among similarly super-popular stars, which indeed tend to be more present in individual sports (to name a few with similar traits: Mohammad Ali, Valentino Rossi).

Many of the character traits we have highlighted contribute in making Conor McGregor a supremely confident individual.

There’s one last key though.

That kind of confidence only comes when you’re not afraid of anything in this world, to quote his fellow countrymen U2.

Physical dominance certainly contributes, but self-belief is mostly a mental state.
You start getting higher and higher on the self-belief scale as your confidence draws from more and more areas, skills and beliefs in your life. Conor draws his confidence from many areas of his life.

He’s not just the best fighter in his category, he’s also witty, socially calibrated, emotionally well adjusted and with a solid net of family and human support around him.

At the very peak of it, supreme confidence comes from the belief that no matter what happens to you, you’ll be fine and content.

That’s total mind control.
Conor McGregor gets close to that state thanks to an important trait he has: bouncing back powerfully from his losses.

It’s indeed easy being confident in victory. But men are born and characters are forged in our worst hours. You test your personality in your failures, not in your victories.

Conor McGregor trusts himself to do well in failure and adversities.

Conor has been there and done that: he owned his failures and came back from them.

All these traits contribute to make McGregor a supremely confident man.

There is more, however.

Conor McGregor can look a bit juvenile as of today.

In my dominance archetypes styles, I refer to him as “upcoming young gun”.
That’s perfect to grab attention, but not if you want to be the most powerful person around.

If he wanted to appear more powerful and ominous, he should:

And cut on the dancing and jumpy, jerky movements

Similarly, he should slow down his rate of speech. And speaking of speech:

Powerful looking people don’t diss and trash talk. And often don’t talk too much for that matter

A great style is important. But, as Robert Greene says, too much desire for attention signals insecurity. Conor McGregor seems to be taking it too far there. Some people will be bound to link that behavior to overcompensation, shallowness and/or, as Greene pointed out, insecurity. That might be true or not, but as they say, perceptions are reality.

And if you wanna dig deeper on McGregor least confident and powerful moments here’s a video:

Conor McGregor checks all the boxes of what Tim Grover, former Michael Jordan trainer, would call a “cleaner”.

He is focused on his art -obsessed actually-, addicted to winning and doesn’t compete with anyone (but makes the competition measure up with him).

McGregor says in an interview he’s motivated by money, and I believe he’s wrong.

Conor McGregor types are motivated by the insatiable hunger of succeeding and dominating. Money is a great side product, I’m sure he loves it, but it’s not the main driver.

While McGregor is dominant -see here some of his power moves- he doesn’t look powerful or intimidating (unless you need to face him in the Octagon, that is :).

He’s more like a funny, overflowing guy who happens to be a cocky fighter too.
If he wanted to look powerful, he’d have to slow down, talk less and rein in his too frequent emotional outbursts (see here how he could take a leaf out of The Godfather’s book).

I started life as an underdog....
657 students enrolled