Contagious analyzes that traits and characteristics that viral products, ads and ideas all have in common.
It’s 6 characteristics they all share, and if you want to go viral, you better incorporate them in your marketing.

About The Author: Jonah Berger holds a PhD in marketing and is currently a professor at the Wharton School. He is considered an expert on word of mouth, social influence and viral marketing.

Berger starts with the example of  Howard Wein.

Wein was not selling just another cheesesteak, but a conversation piece. He did it by using great ingredients and asking for an exorbitant price: a hundred dollars.

Jonah Berger beings by saying that one of the elements of virality is simply having a great product.

Some ideas catch on for simply being better than the alternatives.

Attractive pricing is another obvious why products and ideas spread.
Advertising also helps, Jonah Berger says that word of mouth is more effective than advertising because it’s more persuasive and more targeted.

Jonah Berger goes after the idea that you have to hit the opinion leaders to make your message spread.
He says though that the message in itself is more important than the messenger.

What is then the secret to make our messages contagious?

It’s important to notice that Jonah Berger says that the principles are not like ingredients.
They must not be deployed in a certain fashion, and they are not even all needed at the same time.

Jonah Berger says there are three ways to use social currency:

More remarkable products are talked about twice compared to less remarkable one.

Game mechanics are levels and badges that make us want more.
Berger says that it works internally as we all love achievement, but also because we want to do better than others. Icons can be used, or badges (fourth square).

Making people feel like insiders work because If something is supposed to be secret or limited access people love to share it.
It makes them look cool for sharing something reserved. They were one of the first in the know, and now they’re sharing it with you.

People shared the video of a blender smashing marbles because it was interesting and unexpected.
And sharing something that others will find interesting will give us social points.

Here’s the video the author refers to:

How’s that possible with all the excitement and uniqueness that Disney World commands?

The author says it’s because of triggers.
People rarely go to Disney World and few things remind them of it.
Cheerios are seen often at the supermarket and breakfast every day remind people of Cheerios.

The author says that Mars bars saw a big uptick in sales when NASA launched an expedition to, guess where?
Mars.

KitKat was seeing a constant slump in sales that seemed hard to stop.
It was reversed where and advertising campaign linked KitKat to coffe, so that people would use the coffe trigger to eat a KitKat bar.

There are two types of emotions that lead people to sharing (or not sharing):

Emotions that make us share are arousing emotions like anger, awe, anxiety or excitement.
Sadness and contentment decrease arousal, slow us down and make us relax, leading us to share less.

Very interestingly, Jonah Berger says that when we are in aroused states we tend to share more than we’d normally want.
So if we are on a plane with turbulences, we might tell the person sitting next to us more than we would normally like.

The author says that focusing on feelings is likely to increase sharing and even seemingly dull products can find a way (example of Google search with the story of a couple told through their search queries).

Jonah Berger presents a very few interesting cases on how what’s public influences us even when in private most people would think otherwise.

Similarly, when a presentation has finished and the presenter asks if there are any questions nobody asks anything, because while nobody else has probably understood, the public and visible tell us that we are probably the only ones who didn’t get it.

The author provides a few examples of a few products that effectively used the observability principle.
Hotmail for example, put in the signature the link to sign up for the free service (it was the first free service).
Apple white iPod headphones were a big help in spreading it.

The example of the anti drug “say no” campaign was also extremely interesting.
Jonah Berger says that the campaign actually increased the likelihood people would try drugs because it brought drug use into public observable territory.
The ads basically said that drugs are bad but also, crucially, that other people are doing it.

The example of the music industry was simply a big laugh for me.
When the ads said that only 37% of music was being paid for, the author implies the message was counterproductive.
It basically said that everyone was not paying, that it was OK not to pay and that those paying must have been idiots (similar example for wood in the park).

If something is built to show, it’s built to grow

Jonah Berger says we share useful information because we want to help and if we can help it reflects well on us.

Putting a product on sales, even when the price stays the same, increases demand.

It’s important that the story is relevant to the product, or the product has to be a key part of the story. 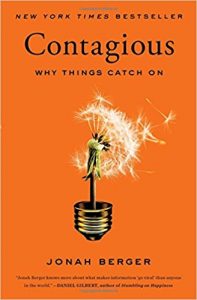 “Contagious” is easy to read, insightful and highly applicable.

It makes a great pair with a few more books on marketing and influencing such as “Make to Stick“, “The Tipping Point“, “Triggers“, “Brandwashed” and “Influence“, the big classic by Cialdini.

Of course, as the author himself says, “Contagious” is not a recipe which you can apply and be guaranteed of success.
I’m afraid that virality is, in good part, the product of pure randomness.

But that doesn’t mean you can’t somewhat increase the odds with some good knowledge, research and creativity.

Highly recommended, and you can get it here on Amazon.