5. Domination Showdown: Step-By-Step Guide to Winning (When Stakes Are High) 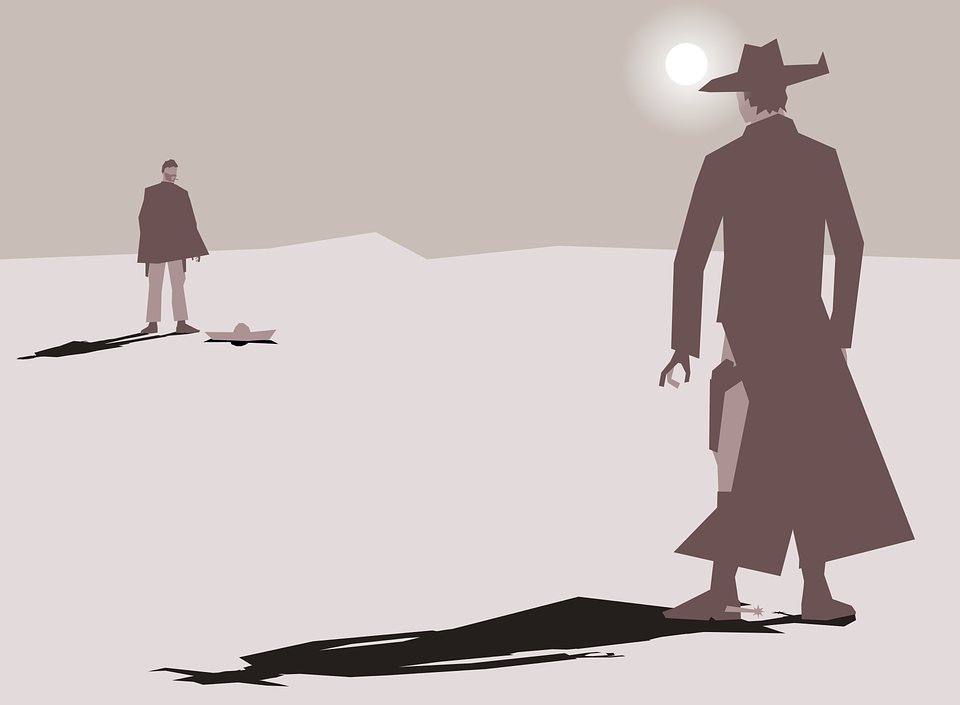 When Dominance Comes Down to One Interaction

There will be times in your life when power relations will be decided on a single interaction.

I call them “dominance showdowns”.

If you win -or if you lose while still looking like a powerful individual- you will gain respect and fair relationships.
They will not abuse you anymore if they were abusing you and you will enjoy a relationship of equals if they are your superiors.
And if you were equals to begin with, chances are that you will become the leader.

But if you lose domination showdowns, it will become a relationship of dominant and dominated. They might not abuse you, but they will have little respect for you.

Showdowns are relatively common with dominant individuals.
They usually happen during these phases of a relationship:

1. At the very beginning
2. When they need something from you
3. When they feel like you are “acting out”
4. When your opinions on what to do diverge

How to Win a Showdown

I will walk you through an example of a domination showdown via email to explain what happened step by step.

The steps are the same for every showdown.

Domination showdowns begin with a push from the individual who’s out to dominate you.

It can be a push to make you take care of a task, to make you backtrack on something or simply an affront to test how you react.

The background story of this example is this: I am the president of a Toastmaster club. And I did not want to select a proxy to vote for me.
My refusal came down to my value: if I am not aware and well informed on what’s going to be voted, I don’t vote.

I had said that a couple of times to our area director, the person right above me.
Obviously, the area director reported the situation, and some people up the chain didn’t like that (most likely because it looked bad on them).

This email then came from a very dominant woman a couple of positions above me in the organization: 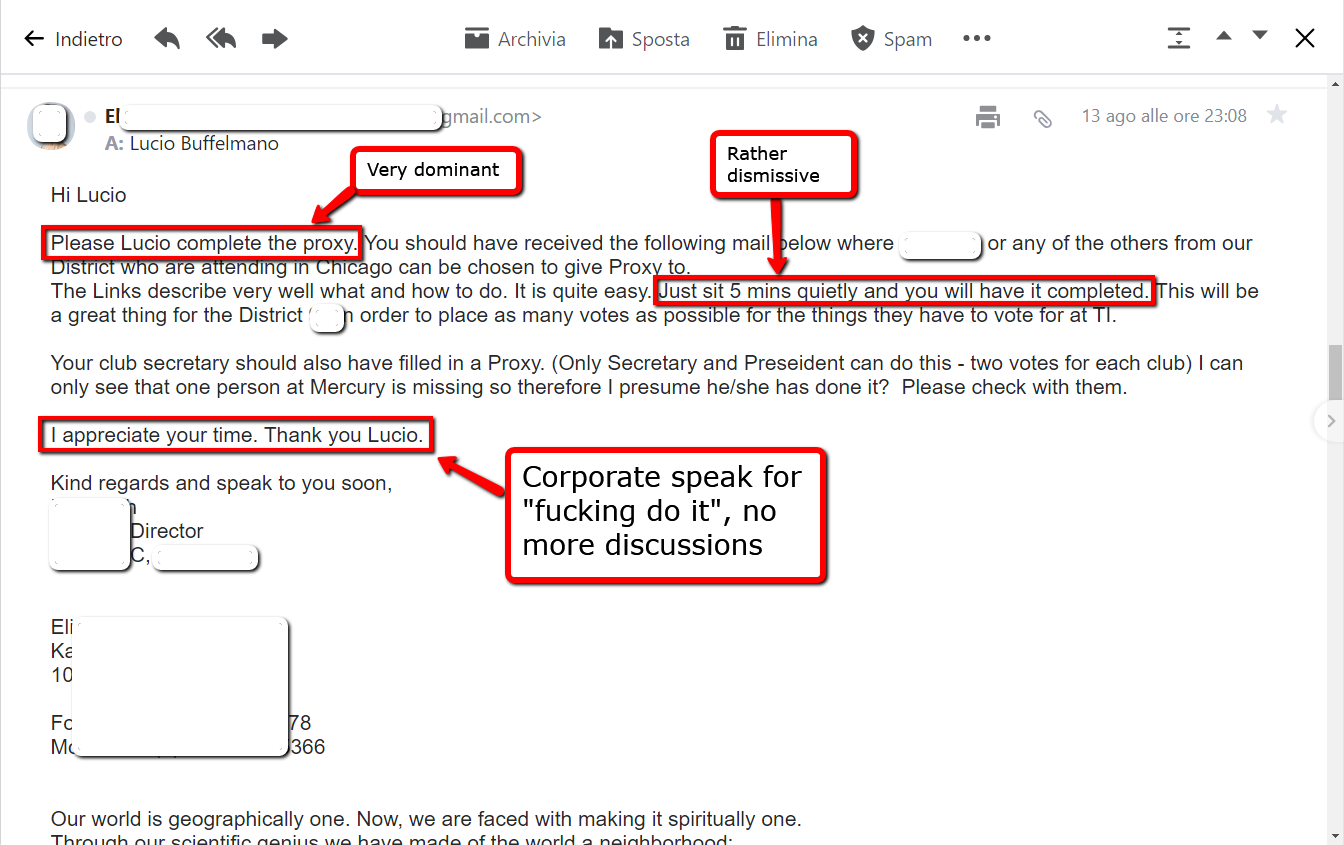 This email basically says “stop fucking around, just do it”.

The first push for compliance is a crucial moment.
If had given up here, I would have looked like a pussy-footer who only follows his values until some higher up pushes him to toe the line.

If I had caved in she would have believed that the dominant approach works with me and I would have lost her respect -and my own respect too-.

The second step of a showdown is you pushing back on their first assault.

Notice below that my email is very brief (obeying the law of social effort).
A long email here could have easily sounded like I was making excuses for myself and spent a huge amount of time mulling this all thing over (high personal investment).

But since I am obeying my values and already explained my position to her report, I don’t need to mull anything over and don’t need to waste time repeating the same concept over and over.

In this case, I only had one question: is it mandatory or not.
If it is, I will need all the information to make an informed decision.
If not, I will not mandate a proxy.

Sometimes the “push” happens only once.
Especially if you look firm.

But if you didn’t seem convincing enough or if they’re really hell-bent in their domination attempt, it might be the case that they push again (and again).

If that’s the case: you must stand your ground each and every time.
Remember the previous lesson that the longer an escalation goes on, the more meaningful the result will be?
That’s why it’s paramount you don’t lose a showdown’s protracted escalation.

To sound even more convincing the second time out you can leverage their own first attempt, saying something like:

You: Are we back at this?
Look, maybe I didn’t make myself clear enough the first time out, so let me explain better.
The reasons why I’m doing what I’m doing are…

If they were disrespectful in their communication, you can add this:

You: Look, I didn’t particularly appreciate your tone the first time out and I thought I had made it clear I appreciate respectful communication.
But seemingly, it wasn’t clear enough.
So let me make it clear it now and hopefully we can go back to collaborating like the respectful people I believe we can be.

Once you successfully and assertively stand up to your rights, the dominant party will either leave, drop the subject or change attitude with a big U-turn.

You can notice here the obvious U-turn in attitude: 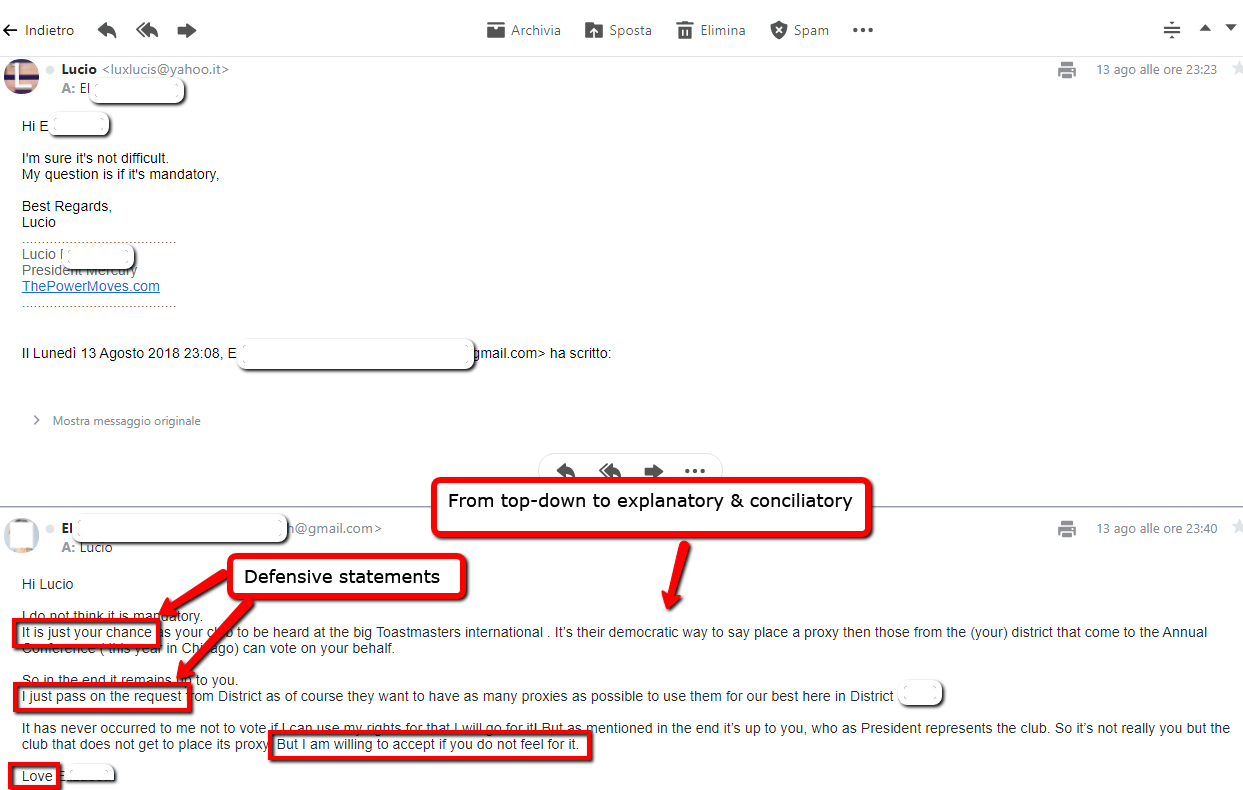 I recommend you look at U-turns as wins for both. A respectful relationship is always a win-win relationship.

Here you must remind yourself of your goal.

What do you want?

In most situations, your goal is not to browbeat people or to embarrass anyone.
Your goal is to enforce the boundaries of a respectful relationship.

And to develop a respectful relationship, you must rebuild goodwill after the potentially nasty showdown.
You have probably crushed their ego, and now you need to rebuild it back up.

Which is what you will want to do right after they come around.

The basic idea is:

Give me shit, and you’ll get shit back. Treat me nicely and I’ll be even nicer

Here is her next email, a week after:

And you should see how incredibly nice she is in person as well.
I have even heard she says great things about me.

The power of a good showdown…

Showdowns are not so rare.

Especially if you are a driven person and have assertive or aggressive people around you, you will likely experience many showdowns in your life.

Here are a few more examples:

I love this example because it shows that to “win” a showdown you don’t even need to “win”.

You “only” need to show yourself as the kind of guy who stands up for what he believes is right and fair.

Jordan punching Steve Kerr was such an example of “winning” a showdown while losing it.

Steve Kerr shows himself of being a really cool guy explaining what had happened and showing us the mentality of handling showdowns.

He says he won’t beat anyone, but he will fight people. “He will lose every time”, he says. But, it’s implied, he will stand up for his rights and what he believes is fair.
What a powerful mentality.

This is a mindset I adopted for myself, and which you can consider for yourself as well:

I will lose every time.
But I still won’t allow any mothafucker to abuse me.

And that’s exactly what happened with Michael Jordan. Kerr stood up to Jordan until Jordan lost it and punched him.
Here is the story told from Jordan’s point of view:

Phil Jackson, the iconic coach of the Bulls during those years explains in Eleven Rings that what happened that day was Kerr standing up to Jordan.
And Jordan respected that.

Later, Kerr showed how cool he was about it by not making a big fuss about it. Which people usually respect even more.

That was a perfectly executed showdown by Kerr.

He proved his mettle, and chances are that Jordan even slightly feared Kerr -in a good way-. Because he knew he couldn’t boss him around without Kerr standing up for is rights and pushing back.

And that’s exactly the attitude you want to develop.

Later we will have a quiz with this video.

This is nothing more but another showdown moment:

You can rest assured that from then on Frank would never, ever again treat Tony like his underling and yell him any orders.

Prev Focus: Dominant Verbal Bullying (Jamie Dimon quiz)
Next 6. The Power Dynamics of Joking & Teasing (& How to Deal With Them)