Crushing It! teaches readers how to build a personal brand through mindsets, success stories and practical advice.

About The Author: Gary Vaynerchuk is an American entrepreneur, influencer and speaker.
He is also the author of “Crush It“, “Jab, Jab, Jab, Right Hook” and “#AskGAryVee“.

Intro: You Can Do It

Gary says that building a personal brand has become a feat anyone can achieve.
And “Crushing It!” is your guide to doing just that.

Gary Vaynerchuk says there are 7+1 key factors in building a personal brand.
They are:

And he highlights a key mistake people do: they care too much about the style.

When you are documenting your life, Gary says, aesthetics don’t matter. What matters is being authentic and speaking your truth.

This Is How You Start

The very first step is creating a Facebook page.

Then look for partnerships.
Gary advises to message people in your niche directly and find a way to give something back.

Gary tackles the major fears and excuses people have before starting their personal branding.

Tailor Your Message to The Platforms

Marshall McLuhan famously said that “the medium is hte message”.

And Gary Vee, albeit not an academic researcher, certainly does have the first-hand experience to talk about tailoring the message.

indeed, this is posible the most interesting and concrete part “Crushing It”, with Gary reviewing the major social platforms out there:

This platform is very popular among teenagers and it’s mostly suited for entertainers.

If you’re a singer, dancer, comedian… Start using those hashtags and collaborate over to Musical.ly.

For those who know Gary, he’s big into Snapchat.

And he’s been saying for a while that it’s one of the most underestimated medium available.

Snapchat is perfect to show your truest self, your rawest and unfiltered personality.

Use Snapchat as your chance to speak your unfiltered self.

It’s the online equivalent of the water cooler where people go to hear the latest rumors.

Gary says you should listen on Twitter to catch the latest trends and stories.

The biggest platform for video creators, which will soon overcome television for time spent watching videos.

It’s just too big to ignore, says Gary.
Vaynerchuk says that even if you think this is not your medium, you have to give it a try.

My note:
I couldn’t agree more from my own personal experience.
I started Yotube with good content but super very low quality videos. For a while I thought I was wasting time and that web was my mainstay.

Some have been calling Facebook’s demise for a while now.
But the giant is still there, still the biggest media platform around.

Which means to you, you cannot not have a Facebook page.

Facebook is possibly the best platform to target your audience, and works great even with smaller budgets. And don’t forget Facebook Live.

Gary says that Instagram’s private message is one of the best ways to connect with other influencers.

He has been saying it for a while as a friend of mine mentioned it as big game changer some time ago.

Then he found out those people must follow you back or your DMs will go into an “other” folder which will likely never be read.

In a world of busy people, podcasts break barriers by allowing consumption on the go or while doing something else.

Voice first is the new kid on the block. Spurred by Amazon Echo and Google Home voice, says Gary, is the future of interaction.

If you’re serious about personal brand, you must look into Alexa. 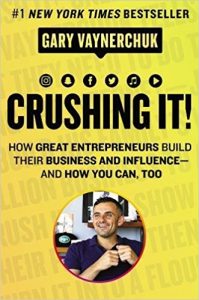 “Crushing It” is a good book for people who seek ot become more like Gary Vaynerchuk.
But, in my opinion, that’s more cult of personality than actual entrepreneurship.

I say this because I see many younger fellas who get the two confused.

The line between influencer and entrepreneur might be blurred in some cases.

But Gary is more for people who want to build a social media presence and follower base rather than building a company.

For example, Gary recommends using Youtube for vlogs. But vlogs are not for everybody.

But I have a different point of view: you should fear mediocrity maybe, but you vanity is definitely something you should move past.

Before starting to put yourself out there, you should ask: do I have something to give?

Self promotion without being great at something is entitlement mentality.

Some can make it without really adding value (law of the large numbers), but your best bet is to make yourself a great person first. Gary addresses it in Crush It.

Gary uses this book as a way of saying that what he told you with his previous book works.

But that doesn’t really prove anything and it’s a typical inductive fallacy mistake (check Fooled by Randomness) and prone to survivorship bias.

As an example, imagine that today I’d tell you: the best way to get rich is to invest in lottery tickets.
Then 5 years from now I’d present you a list of people who got rich with lotteries. Would that prove anything?
Exactly my point.

I’m not a big fan of Gary over-the-top style.

And not even of his advice.
if I look at Gary’s followers, most of them fall into two categories:

This is a an interesting critique of Gary’s motivational soups:

That being said, there is also one thing I like a lot about Gary:

This is a message Gary repeats often.
And I couldn’t agree more with him. That’s how I based my life and my business, after all.

Gary Vaynerchuk is widely considered an expert of social media because, well, he is doing well for himself there.

If you are serious about building a personal brand, you should look into guys like Gary Vaynerchuk.
And Crushing It! sums up his views quite well.

Read more book summaries and get the book on Amazon.