#Girlboss by Sophia Amoruso is the story of how a nonconformist leveraged her uniqueness instead of fitting in and toeing the line.

A #Girlboss is not just someone who is a boss or runs a business. Being a #girlboss is about being in charge of your own life.

The Importance of Following Your Bliss

Amoruso did try to fit in and she amassed a bunch of jobs she either quickly quit or was fired from. In the beginning she thought it was her laziness problem.
But it actually was that those jobs weren’t for her.
Because when she negotiated clothes and resold clothes she loved, she worked so hard and passionately that she didn’t even realize time was flying.

Be an Expert at What You Love

Once you understand what you love doing, then you need to become an expert at it. Which should be a pleasure anyway, as this is your thing.
As Angela Duckworth explains in Grit, passion deepens when we do what we like.

Ask to Get What You Need

Amoruso on day found herself on the road in the middle of heavy rain downpour. She didn’t have any money on her, but as a Greyhound bus approached she put her thumb out and hitched a ride. For free.
That hit her hard: to get what you want, you need to ask.

Break Rules – but not laws

The author invites the readers to think and move creatively, breaking rules.
But the day she got caught shoplifting and paid a fine to avoid jail-time, she realized it’s not worth it to break the law.
Just break the arbitrary rules.

And Always Abide This Rule

And always abide the golden rule of the universe:

Do to others what you want them do to you

Avoid Revenge: Focus on Yourself

One day Amoruso saw a competitor copy her whole website and try to pass it off as her own. I can imagine was a shocking and upsetting experience that must have been.
But the author swallowed her anger and rededicated herself to her business, working on making it better.
If let others sidetrack you from your work and passion, you’ll turn your back on your creativity and innovation.
That’s a lesson I often ponder as a public writer myself.

A creative entrepreneurial approach questions the rules and challenges the status quo.
But often creative people forget the practicality of the business side. You shouldn’t go too deep into either and too far away from one another.
And not to err too into the short-termism of business it’s important you hold steady to your core principles.

Sophia Amoruso says the biggest glow doesn’t emanate from your clothes, but from your confidence. Confidence, as a person and as a brand, means also knowing what you stand for and having the courage to carve your own path in life.

And to Amoruso, it means talking and engaging to people, even strangers, without playing the “aloof game” to look cooler.
Because that actually hides a lack of confidence. 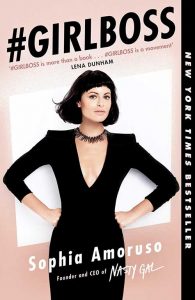 Keep your anticomformista ways!
Your anti-conformism can be your surest fire way to success. But:

Get great at what you do
You can’t be an antinconformista and expect success because of it. That’s how all the naughty struggling and entitled artist think and feel, and they deserve staying unsuccessful.
You have to work to deliver on your gifts.

Work around your introversion!
As an introvert myself, I particularly liked how Amoruso tackles this issue. She says people give too much weight to networking (read: Never Eat Alone). She says introverts have different skills and qualities they can leverage. And the Internet era make it easy to work around the introvert’s limitations (indeed).

Scamming and Stealing
I’ll admit it: I have at times stolen. I’ve done it recently too, some extremely small ticket item I’ve stolen not out of need and not even to save but simply to “push my limits”.
But I don’t think that’s cool or gives you any bragging rights. I feel the author sometimes revels in her small time illegal past, and that’s not cool.

Bit Self Aggrandizing
It’s understandable since she tells the story of her own success, but at times it feels a bit self aggrandizing.

Interviewing Digression
I find her description of interviewing, hiring and firing a bit unneeded.

Perfect for nonconformists
It’s really a great, great book for all artists, noncomformists and people who generally struggle in abiding the rules while working for someone else.

I loved #girlboss.
I didn’t expect it to be honest as I thought this was some feminist-heavy book. It’s not and it actually really spoke to me.
In many ways, I feel close to the early trajectory of Sophia Amoruse of struggling in jobs and occupation that didn’t satisfy her unconventional nature.
And by leveraging on her uniqueness -working hard on it-, she made it her own way.

I can really recommend #girlboss not just to women, but to all unconventional people who want more than a 9 to 5.