In Purple Cow author Seth Godin tells you that to spread your ideas you need to be remarkable.

About the Author: Seth Godin is an American marketer, blogger, and author. He has written many books on productivity and creativity.

Too Many Products Advertised

Seth Godin says that there are so many products and advertisements these days that advertisement has lost much of its value.

You simply cannot get noticed in this deluge.

Seth Godin says that most general advertisement is ineffective.

My Note: Such a generalization. Why then advertisers spend billions?
This makes little sense. Advertising is an industry that kept on going for decades because it works.

Going Back to Old Advertising Ways

Seth Godin says that before advertising all the buzz was through word of mouth.

Then when advertising came along.
And in the beginning, it really worked well and there was a strong link between how much advertisement and sales.
But now we are in the era of advertisement saturation. And we should be going back to the word of mouth marketing.
With Facebook, Twitter, and social network it’s even easier.

Today there are so many products that satisfying customers’ needs is not enough.
And advertisement is ineffective.

Taking Risk is The Only Option

Being safe means being boring and unremarkable, and that’s the safest way to sell little and go straight into oblivion.

The author mentions the car maker Buick, which always “kept it safe” with its design and, well… Never sold well.

Another “safe” strategy is to follow the market leader and copy them. But that means you’ll never be the leader.
Companies following that strategy will always fail in the long run because the market will invariably change and they won’t be able to innovate.

Seth Godin argues that you should not try to sell to the mass market and the average Joe.

But you should instead be remarkable and sell to a smaller group of innovators.
Those guys are the ones who are willing and excited to try new things. They will talk about your product and they will help you to make it grow.

This is called the diffusion curve, and Godin takes this concept from the famous book Crossing the Chasm.

Seth Godin says that in this era where so few people pay attention it’s paramount that you target your ads to the early innovators and to the people who care about your product.

That’s the first step.
The second one is to measure and adjust your advertisement depending on the feedback you get. 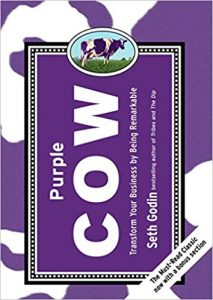 One of the reasons many individuals and companies resist being remarkable is the fear of failure and ridicule. Don’t!
Even if some might don’t like you, you only need to be liked by a few to be successful. And you have an immense higher chance when you are remarkable.

Some of the ideas are good and noteworthy, but you don’t really need a whole book for it.

In his TED talk on Purple Cow Seth Godin shows a picture of multicolored packaging products that all try to be remarkable.

Then, he says that all products try to capture people’s attention.

And what’s his great plan for selling more?
Trying even harder to catch people’s attention by being remarkable.

But, what a second… That’s exactly what they were all trying to do!
It feels like telling to the soldier going to war that the secret to stay alive is to shoot the enemy first. Well, that’s what they’re all trying to do, isn’t it?

There are plenty of niches where you can just be unremarkable and complement a market leader product with an add-on product and make lots of money.

Investor and entrepreneur Jay Samith in Disrupt You talks about exactly that strategy. He says that today everyone’s trying to be unique. And there are plenty of opportunities left for those who occupy the more boring area of the marketplace.
Samith has plenty of examples that he exploited himself to make lots of money while thriving with unremarkable products.

Godin says he had is the idea of purple cow while watching a long field of cows in Europe.

However, there is a well-known brand in Europe that has a purple cow as a brand.
Should we believe Godin that he had his inspiration watching fields of mammals instead of following his sweet tooth in some shop?

But whichever the case, I like the book’s concept. However, frankly, I don’t think you need to read this book in its entirety.

And I think you can get better to employ your time by getting the same message through a summary or a 10 minutes speech.