In “Sapiens” author Yuval Noah Harari reviews our history as Homo Sapiens, from the plains of East Africa passing through modernity, and speculating about the future.

About The Author: Yuval Noah Harari is an Israeli professor of history at the Hebrew University of Jerusalem.
He is mots famous for the popular book “Sapiens: A Brief History of Humankind”

Where We First Started

Humans appeared around 2.5 millions ago in East Africa, evolving from a genus of great apes known as Australopithecus.

These early humans were homo rudolfensis and homo erectus. From East Africa the first hominids spread out and evolved into homo neanderthalensis in Europe and Asia.

Homo Sapiens: How We Won The Evolutionary Race

Apparently, there was notihng too special about homo sapiens. And yet, they came to dominate the world.
What happened?

There are two theories:

Probably both are correct.
There has been some interbreeding (between 1 and 4% of European’s DNA is neanderthalensis DNA) and probably killed quite a few of those other hominids (including, I’d add, a few of other sapiens intra-killing as well).

What is it that gave Homo Sapiens the advantage over other hominids?
Our advantage is our superior brain power.

Around 70.000 years ago the sapiens brain underwent what Yuval Noah Harari calls the cognitive revolution.
In a relatively short time span, the Homo Sapiens was now able to leverage the increased brainpower to:

All those changes meant that the Homo Sapiens could find food, more easily, in more difficult times and more challenging environments.
That allowed to spread out everywhere.
For example, Homo Sapiens were able to hunt mammoths and use their skin for shoes and warm clothing. And with those, they could cross the icy Siberian passage to colonize America.

Homo Sapiens And Their Blood Trail

Wherever the Homo Sapiens went, it hunted the local game to extinction.

In Australia only until 50.000 years ago lived a multitude of mammals, some of which huge potentially dangerous.
But within a couple of thousand of years from the arrival of Homo Sapiens, they all but disappeared.

My Note:
It’s actually debated whether humans were the only responsible for the extinction of all the big Australian mammals.
Also read “The Third Chimpanzee“.

One of the biggest advantages of the Homo Sapiens over all other hominids and species is language.
Language allowed to cooperate flexibly and in large number.

Language is the glue that keeps society together. From the smallest tribes to our current global world our ability to community allows for the most diverse people and cultures to share innovation.

Around 12.000 years ago Homo Sapiens learned to grow crops.

That meant we didn’t need anymore to rely on hunting and gathering, but we could settle down somewhere specific and produce our own food.

The Downsides of the Agricultural Revolution

It would require the whole day of work for a limited amount of crops, which weren’t even very digestible or nutrient.

However, he says, its adoption came over several generations and it also provided one big advantage: quantity.
We could cram a high amount of plants into a relatively small piece of land, and that allowed for the Sapiens’ population to explode.

With the agricultural revolution not everyone was forced to hunt and gather at all times, and some people could focus instead of making tools, or weaving clothes.

In the beginning they probably exchanged the first tools for food, but the complexities of growing trade and specialization rendered bartering very inefficient.

The author says that’s why around 3.000 years ago we invented writing and money.
That happened in Mesopotamia, with the Sumerians.

To keep economies and societies running smooth and to keep fraud in check, kings began to write down laws.
Common laws across society allowed people to trade and act according to known customs and rules.

The author says that religion started as a way for the kings to legitimize their power. As the ancient empires grew and more of them sprouted around the world, so religion became more accepted.

My Note:
I don’t agree with the idea that religion was promoted thanks to kings who wanted to legitimize their power. Not because it also didn’t serve that purpose as well, but because it’s a very simplistic explanation.
Religion instead simply “comes natural” to humans. It was there before kings, and it’s still here today when there are no kings.
Also read “The God Delusion“.

The author says that for a long time humanity didn’t evolve because it believe that they had no control over their lives. It was all up to God.
But that changed with the scientific revolution in the 16th century, towards the end of the Renaissance.

My Note:
I believe this is really just a wrong read not only of what events mean, but a wrong read of history.
The Romans didn’t wait around in fear of God but acted upon their environment.
You don’t need to take my word, just read Marcus Aurelius masterpiece Meditations.

Today we live in a highly globalized world, we believe less in religions and we all believe in capitalism and showing off our material wealth.
There are many critics of globalization but, the author says, it allowed for a very peaceful time for us.

My Note:
I think this is another simplistic explanation.
Nuclear devices and the ability for asssured mutual destruction are what prevented major world wars among Western nations.
Otherwise, there are still as many wars around the world. 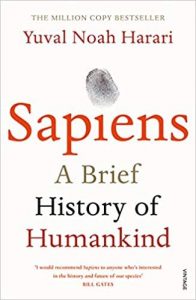 The author is not out to provide a neutral history of key events backed by facts, but he is sharing his opinions.

That would be totally cool if he had admitted it. Had he done so, “Sapiens” would have been a wonderful book.

But the game changes when the author pretends he is providing facts instead of his own opinions and conjectures.
To me, that’s the ultimate sin of intellectual dishonesty and the ultimate form of manipulation.

Harari comes across as a left-wing critical of the capitalist system.
That’s cool, I’m also critical of nations, nationalism and, partially, of marketing-driven consumerism.

Harari might have been a capitalist critical of Marxism, and that would have also been OK.

But the point is that whatever Harari’s personal politics are, it shouldn’t have tainted all his work. IF he wanted to provide a neutral account of events, at least.
He doesn’t even try and, again, he presents his own opinions facts.

And the fact that Zuckerberg and Bill Gates both loved this book says a lot about capitalists’ manipulations.

Sapiens had a bit of that “back then was better” flair that I just can’t stand.

I don’t know how can people say that hunter gatherers were happier than agricultural people, or that the agricultural revolution “wasn’t that good”.

Maybe it wasn’t but… Based on what exactly?
Exactly, the author’s opinion, again.

Of course, the fact that agriculture spread to all humans at lightening speed might suggest to any honest historian that maybe it wasn’t that bad?

That, or humans were all stupid back then. The author and some other ivory tower intellectuals secretly thinks so, maybe.

I have read a few histories of the world tomes (yeah, geeky guy, I know), and I found some inconsistencies between them and Sapiens.

I’m sure the author knows more about history than I do, but, somehow, what I had previously read made more sense to me.

This history of the world seems to be very Western-centric. Many cultures were never very religious to begin with. And many cultures are as religious now as they were in the previous millennia (if not more).

I personally found Sapiens to have a bit of that “anti-white”, “anti-capitalism” bias.

Could Be Entertaining
It was an entertaining read for me up until we were in the pre-historian period.
Then I started seeing a few mistakes and a few “opinions for facts” and I personally didn’t enjoy it as much anymore.
However, if you can look past it, it might still be good for you.

Can Add Knowledge
Sapiens can make you more aware and knowledgeable about our history.

Great Analysis on Scientific Revolution
Why did Europe end up conquering the world?

Yuval provides a different perspective than the environment-centric answer of Jared Diamond in “Guns, Germs, And Steel“.

And I fully agree with him here. It was indeed the scientific revolution that threw the basis for the western civilization to dominate the world and impose its culture.

And the scientific revolution made it possible for the world to experience such the unprecedented progress we are enjoying today.

If you’re looking for a balanced and more fact-based history of humans, I would not recommend “Sapiens” because it’s very thick with the author’s own opinions and assumptions.

That would be OK, IF the author admitted there is much of his own interpretation.
However, much like “Guns, Germs, and Steel“, the author pretends to be a neutral observers and masquerades his own opinion as facts.
As it stands, I found “Sapiens” intellectually dishonest.