Stumbling on Happiness purports to explore and explain how happiness works.
However, I find to be a patchwork of psychological phenomenon with little practical application to increasing happiness.

Stumbling on Happiness is a mix of interesting experiments on psychology and social psychology.
Here are a few of them:

We Build Our Reality

Our eyes have a blind spot, yet we don’t see any black hole in our vision because our minds fill in the black spot with what it thinks should be there.
And we do the same for large portions of reality:

Our mind is so quick and natural at adding information that we don’t even realize it’s happening.

Our Future Scenarios Are Inaccurate

Similarly as to how we build our past, we also invent our future predictions.

Sometimes we start with one detail and we imagine a whole scene around it. After we do, we tend to believe in our own predictions.
And we fail to realize that albeit our own predictions is not necessarily untrue, it’s only one scenario in nearly limitless alternative realities.
And mathematically, the scenario that we imagine is quite unlikely to happen.

Present state strongly influence our beliefs about the future.

And we act accordingly.

This happens because our brains is much more concerned about the present moment than the future.
And if you feel one way today it’s much harder for the brain to imagine a state in the (near) future which is different or even opposite.

We often have a tendency to judge prices not based on how much we find the product useful, but on how much the price has risen or fallen compared to the past.

In psychology, this phenomenon is called anchoring, and was first theorized by Daniel Kahneman, author of Thinking Fast and Slow (Tversky & Kahneman, 1974).

Daniel Gilbert exhorts the readers to value products based on the pleasure and the usefulness to us rather than its pricing dynamics.

Money only makes you happy up to a certain point.

Wealth only increases happiness when it lifts people from poverty to middle class.
So, for example, Americans earning 50K a year are happier than those making 10K a year. However, beyond the middle class level more money won’t buy more happiness.

The author says this false myth of money bringing happiness spreads because it’s good for society as a whole. But I don’t think that’s the case.

We Think We’re Unique And Don’t Ask for Advice

We all think we are unique.

And maybe we are.
But the truth is that, often, our situations and life events are not that different from each other.

However the belief that we are unique stops us from seeking advice.

The author contents this is a mistake and we could all benefit from seeking more advice.

We Regret What We Didn’t Do

Daniel Gilbert righteously says that we usually don’t feel too bad about actions that we have taken, not even when they yielded poor results.

It’s because usually our brain actively tries to make us feel better and reduce cognitive dissonance (Festinger, 1957). So we find excuses to convince ourselves it’s not that bad.

But we have bigger issues in convincing ourselves of what we did not do.
That means that we majorly regret actions that could have resulted in a big windfall for us but that we didn’t take.

However, we are unaware of this limitation of our mind and we believe the opposite. Such as that we regret bad and wrong actions more than we would regret inaction.

But that’s not true.

Lesson learned: when you are not sure, go for it. You can learn from your mistakes but you’ll always regret inaction.

We Won’t Feel Nearly As Bad As We Think

Stumbling on happiness makes the point that we often feel worse for small misfortune than for really major ones.

This is because we have an in-built mechanism that often kicks in to protect our mental well being when really major disaster happens.

But we don’t have the same for smaller events.

This means that we might be more bothered by a scratch on our new car than for our house burning down.

And we also tend to bounce back much more quickly than we think from major life misfortunes.

Most people believe that we are happier with lots of choices.

However, experience shows that having lots of options leads to paralysis of choice, time wasting, and unhappiness.

On the topic also read:

Mystery Is Better Than Knowing

Usually, mysteries capture our imagination more than events where everything is clear.

For example, chances are you’ll be elated of receiving a gift from a mysterious lover.
But the moment the person reveals himself, chances are you will be a bit disappointed: now you know and the mystery is gone.

Daniel Gilbert says this happens because mysterious events are unusual and they get us more excited. Furthermore, we think about them longer and more deeply, deepening our feelings and making them last longer.

People usually pick friends who approve of us and similar to us.

That can lead to issues when we ask for feedback. if our friends are just like we will have a tendency to hear what we already think, feel and know.
And it will limit the exposure to new ideas and contrasting opinions. 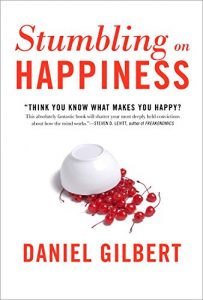 When You’re Not Sure, Do It
We often regret inaction more than actions that yield bad results. And when you take action and you don’t get what you wanted, you have still learned something.
So go for it.

Don’t Send Anonymous Gifts
When you send anonymous gifts to someone with the idea of revealing your identity later chances are they won’t happy to know it’s you.
Not because it’s you, but because people long for the mystery and when the mystery goes away we can’t help it but be disappointed.

Only always send a gift with your name on it then.

At times Stumbling on Happiness feels like a mumble jumble of interesting tidbits of psychology information, but… It doesn’t build towards a climax or a specific point.
In my opinion, it lacked a coherent narrative. Why was this book written? That’s the question I couldn’t answer.

Could have been shorter.

I believe that the idea that money gives people happiness spreads because it’s good for society makes no sense. It spreads because poor and middle class just don’t know any better.

The author gushes over Angela Duckworth’s concept of “Grit” (check Duckworth’s book “Grit” here).
It’s an interesting point for sure, but Grit has been heavily criticized as a concept (check out my list of pop-psychology myths).

Some Good Golden Nuggets
I found some good ideas on Stumbling on Happiness. My favorite were of never going from positive mystery to introducing yourself. And the second one was another reason of why we should be adopting an action bias.

This was my favorite video summary and review of Stumbling on Happiness:

Stumbling on Happiness follows a long list of books that takes psychology research and experiments and seeks to find practical applications that can improve lives (read Malcolm Gladwell books’ style).

In a way, that’s also what I’m doing with The Power Moves, applying science and psychology to human relationships.

Whether or now we are successful in this endeavor and produce useful information is a different question.

Honestly, I didn’t find Stumbling on Happiness to be particularly useful or enlightening.
It’s not that it’s bad: it’s not bad and there are good ideas. It’s just that I personally didn’t see much point in it.