Sway explains with anecdotes and experiments how the human mind is far less rational than we believe, and how we constantly fall victims of psychological pitfalls that we are not even aware of.
Ori and Rom Brafman, the authors, also give useful suggestions on how to improve our decision making by taking our psychological biases into account.

About the Authors: Ori Brafman is an American author and organizational consultant. He is is a “Distinguished Teaching Fellow at UC Berkeley’s Haas School of Business”.
Rom seems to go for a lower-key public profile.

If you have been reading my summaries or if you are into psychology by now you probably know that humans are loss averse.
That means that we fear losses more than we look forward to gains, and it can lead to a whole host of irrational decisions.

The Brafman brothers though add an interesting twist: our loss aversion makes us biased towards short term actions that can be harmful to our long-term well being.

Imagine for example that you are late and a driver in front of you is going too slow.
Chances are that you will get nervous and attempt a risky overtake that could end up costing really big.
Not only getting nervous is unhealthy, but the risk of a risky overtake far outweigh the limited advantage of a couple of minutes top.

Why Our Friends Know Better About Our Relationships (Commitment Bias)

We dismiss objective data when it doesn’t fit what we want to see.

And this is most apparent when we really want to see something or when we’re blinded by… Love (MacDonald, Ross, 1999).

MacDonald and Ross showed that roommates and parents were better able to assess the longevity of the relationship than the partners themselves were.

What’s interesting though is that the partners knew and saw about their own problems.
They just ignored them when ti came to making long-term predictions.

The authors say that it’s similar to what happens when you see, say, a house that you like and you start fantasizing how nice it would be to live there.
Then, you immediately become blind to the house issues and you focus on the positives.

When we attribute a certain initial value to a product we will act accordingly to that value, even though the “real” value might be different.

How a product is presented heavily influences the initial value attribution, as the authors show for example with a world-famous violinist playing in a subway station and nobody even noticing him.

When we discount products, people also tend to value it less, including after they bought it.

If people pay a high price for something, they’re more likely to value it more, use it more attentively, and come back more often to it.

Well, that’s true.
As a matter of fact, it might be far truer than you imagine.

For example, NBA players who got drafted late were unconsciously labeled as poor by their coaches.
What happened was that, at parity of actual performance metrics, they still played less and got traded earlier.

The bias became so entrenched over time that it didn’t go away at all. Even their careers were shorter than early picks.

And remember, this is at parity of actual performance metrics.

People are irrational even when it comes to getting stuff for free.

Experiments show indeed that people will refuse to receive money if they know that the offerer is keeping the majority for themselves.

Why?
Because people expect and want fairness and will rather lose or get nothing than having to stand an unfair deal.

It’s also important to notice though that what is “fair” varies by culture. The same experiment in an isolated culture, for example, showed that people were willing to accept any sum of money no matter how much the offerer kept for himself.

But in the west, you better look fair. And that’s the reason why I recommend a different technique for lowballing in negotiations.

The authors then expand what “fair” means and show that respect and human connection are often more important than actual results in court (for lawyers) or business negotiations (car dealers).

This is also similar to the pattern we see in doctors and legal proceedings, with rude doctors getting sued more often than bad doctors (Cialdini, Influence).

If you are familiar with the concept of intrinsic and extrinsic motivation that Daniel Pink discusses in his bestseller Drive then you know what I’m talking about here.

But the Brafman brothers add some good neuroscience to this phenomenon.
What happens is that we can only access one brain region at a time, and it’s either self-interest (ie.: offer of money) or altruism (ie.: helping the community or being of service).

Thus, when you offer money, you remove altruism and higher ideals from the equation.
And unless people are desperate for money or you are really offering a huge sum, it’s very possible that you might end up being much less persuasive with money than with appeals to higher ideals.

You Need Dissenters in Your Groups

The Brafman brothers also get into the social dynamics of groups and they say we can differentiate four different psychological types:

Of course, people will be naturally attracted to the initiators who are optimistic, bring new ideas and, often, are also charismatic individuals. 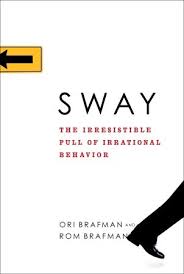 Explaining why we are choosing a certain price, a certain argument position or a certain decision can be all that a person needs to feel like he has been treated fairly.

People were willing to accept “unfair deals” if they were randomly generated or chosen by a computer.
They just didn’t want to do accept it from another human being.

I found the authors’ position to be overly critical of the Diagnosti and Statistical Manual of Mental Disorders (DSM).

Of course, the DSM is not perfect, but that does not mean that it cannot be a useful text and a useful support for psychologists and students alike.

The authors say that men signed up in higher numbers to a loan when there was a picture of an attractive woman in the prospect. They say it’s because of diagnostic error, but to me, it sounds more like a halo effect.

And it’s not always working BTW, using sexual lures on products that are not directly related to sex can have the opposite effect (Aronson, 1972).

Sway is a good book on human psychological baises.

It’s somewhat similar to “Predictably Irrational” and “Thinking Fast and Slow“.
A bit more on the “pop-psychology” side though, since it’s more about stories and anecdotes.
However, in this case, I am not using the term “pop-psychology” in its pejorative form but in its more positive sense.

Because “Sway” is both interesting and entertaining, but also adds quite some new information to anyone who’s interested in psychology and people’s behavior.