The Everything Store is the unauthorized biography of Amazon and Bezos.
It’s an easy read with lots of good tidbits for those who want to learn and grow themselves or their companies.

Jeff Bezos is a life time learner and credits much of his success to books he reads. AWS, Amazon’s most successful product, was born out of books he read.

Jeff Bezos’ Amazon is a notoriously customer-centric enterprise. Even when internal opposition wanted otherwise, Bezos always pushed for the solution which would best fit the customer.

For example, not everyone liked the public customer reviews on the books, but Bezos pushed for them anyway.

And not everyone liked the sales of used products on the platform, but Bezos went with it anyway.

Ultimately, Bezos did it because they were good for the customers. And customer engagement always resulted in more sales and larger bottom line.

This is a mindset that Peter Diamandis author of Bold also refers to as “missionary VS mercenary”. The missionary wants to add value, while the mercenary wants to make a quick buck and run with the money.
Amazon is in the missionary business -just not maybe with its warehouse workers :)-.

Bezos knew that the great advantage he had over brick and mortar shop was the ability to analyze anything customers did on their webpage.
And analyzing Amazon did.
Almost obsessively.
But again, the end user benefited.
Product recommendations indeed is one of the ways with which most users find out about products they might like and that they would have never found out otherwise. And which, incidentally, leads to more sales for Amazon.

Company’s meetings and internal recommendations and ideas area also all based on data. If you have a thesis and idea, it should be reflected on the data.
No anecdotes allowed.

Jeff Bezos is a very frugal man, and he believes that frugality foster innovations and new efficient methods to better serve the customers.

The same frugality applies to employees, who pay for their own parking permits, sleep in double rooms on business trips and enjoy no free snacks and food at work.

However, office workers’ frugality is nothing compared to what happens in the “fulfillment centers” -ie.: warehouses-.
Amazon initially settles in within economically disadvantaged territories where cheap labor is abundant. And then they maximize that cheap labor’s input as much as possible.

For example, Amazon hires temporary workers during peak times to then discard them right after holiday season. And employees can get fired for talking to each other.

For example, writes Stone, nobody gives presentation at meetings. But everyone writes a paper with their ideas that everyone else in the room will be reading.
In Jeff Bezos’ mind, that forces people to think about their ideas more critically.

Bezos also believes that meetings of big group of people are a time waste and that “communication is terrible”. He prefers then to have very small and decentralized teams where each team competes for resources while working on solving the same problems.

Amazon has also engaged in expensive pre-emptive investments and has been happy with losing money in the short term as long as they believed they would benefit in the long term.

For example, for many years Amazon stayed in red because of major expenditure in its infrastructure. However, as the company grew, that infrastructure allowed Amazon to become the everything store it later became.

Similarly, Amazon had been selling ebooks at a loss in the beginning because it could only buy ebooks at the same price as their print version from the publishers.
But Bezos wanted to grab the ebook market. He knew that publishers would eventually need to lower their price, and that short term loss paved the way for the Kindle and for making Amazon, indeed, the go-to place for ebooks.

Bezos has a big bias for doing things and learning along the way.
Even if that might mean failing.

That has happened for example with Amazon auctions, which was not able to compete against Ebay and had to shut down a few months after its launch.

But it also led to incredible innovations such as one-click ordering.

To encourage a culture of taking sots, Bezos even institute an award for employees who tried things on their own initiative.
No money with the award however: Amazon stays true to its thrifty culture.

Amazon lost hundred of millions on acquisitions it undertook right before the Dot.com bubble burst. From there, it preferred to do thing in-house rather than buying from outside companies.

Already today Amazon is much more than a retailer.
It’s even more than an everything store.

AWS for example provides computational power and storage for thousands of start-ups and bigger agencies such as NASA, CIA and the US government.
As a matter of fact, AWS is by far the biggest player in cloud computing platform.

The Kindle itself was another genius move into the production of Amazon’s own product, and it was a smash hit.

But Bezos wants to go farther.
He wants to move into same-day delivery of groceries, with a fleet of Amazon trucks.
And wants to enlarge is own products line with TV sets, smartphones, film studio branch and even eventually 3D printing services.

For Bezos indeed, the adventure has just begun.
And that’s why he didn’t think it was even time to think about a biography.

The Everything Store Criticism

Brad Stone has received quite some criticism of her Everything Store book.

To begin with, a book that purports to tell the story of Amazon and its founder Jeff Bezos without actually having direct access to Bezos, is bound to have some limitations.

At the same time, as an unauthorized biography, it can also have the advantage of not having to stick to PR policies and embellishments by the protagonists.

Jeff Bezos’ whife, MacKenzie Bezos, tore the book apart.
Bezos didn’t come across as a very reasonable and warm individual, and she probably didn’t like that. Of course, if MacKenzie Bezos wanted to sink the book she made a major blunder. With her public reply indeed she only drew more attention to the book and the author.

However, some other people who have been featured in the book and who have also been interviewed by Brad Stone weren’t nearly as scathing.

Personally, I did have some doubts myself.
The six pages report didn’t make sense. And neither it made much sense how Amazon’s thrift culture squeezed it’s employees. How could Amazon attract and retain top employees while sending them on double room on their business trips?
That didn’t add up. 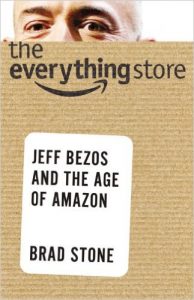 Always Keep Learning
I was astonished at how much of Bezos success was down to learning from others and applying lessons and ideas he got from books.
It’s an important reminder for us all: always keep learning.

No Access to Bezos Himself
Bezos sometimes comes across so quirky that I had troubles believing this book. Considering that the author didn’t have direct access to Bezos and anything “weird” helps selling, I had to wonder.

Entertaining Story
The Everything Store reads quickly like a novel, but…

Very Instructive
.. Also teaches you a lot on both mindsets of success and how to a giant company develops.

First of all, I’d like to point out how different Jeff Bezos approach to business is. Peter Thiel for example focuses on the importance of margins and being in a monopoly.
Bezos instead says that high margin attract competitors so he’d rater be in a low margin business.

Second, I was impressed by this: in all its market domination, Amazon is still much smaller than Alibaba.

Thirdly, I must say that my experience with Amazon wasn’t so customer-friendly with Prime. The way Amazon pushes Prime is excessive and borderline sleazy.

Overall, the book is good. Might even be very good.

I’m slightly worried though it might be a bit too romanticized and novel-like. I’d worry about realism and neutrality if your goal is learning the most about Amazon and Bezos so that you can become the best entrepreneur you can be.