The Millionaire Next Door is a study on millionaires, teaching readers what are the habits and mindsets of actual millionaires.

Stanley & Danko say there are 7 common elements among millionaires.
Millionaires:

1. Meet the Millionaire Next Door

Stanley & Danko define millionaire as someone having a net worth of one million USD or higher.

The book, however, focuses mostly on people who have a net worth of between one and ten millions, which is a level of wealth attainable by most in a single generation.

I find their list of most common millionaire type quite interesting.
The typical millionaire is:

Stanley & Danko say many people could be wealthy but are not because of their mindset around spending.

They are on the hedonic treadmill and believe that not displaying wealth is like not having any.
For these people, you are successful when you can show and consume, so they maximize their income around consumption.
And some of them even take up debt to fuel their consumption (this is the definition of the sidewalk people in DeMarco’s The Millionaire Fastlane)

Instead, the millionaires budget and control their expenses.

The typical millionaires in Stanley & Danko survey has an annual income of less than 7% of their total wealth.
When your wealth is so high compared to your income you maximize your tax as well because only 7% of your wealth is subject to taxes.

The authors say many of the millionaires they interviewed have a total taxable annual income of less than 80.000 USD!

They know how they spend and they plan their investments. It’s because millionaires care about their wealth. Their wealth is important for them.

The authors suggest you do the same and record what you buy and how much you spend for each category of product and service you consume.
You can do either by yourself or you can use the help of your accountant.

Once you know how much you’re spending you should budget in a way that allows you to save at least 15% of your income.

4. You Aren’t What You Drive

Half of the millionaires don’t spend more than 29,000 USD on cars… In their whole life!

The authors say that car-buying behavior show very well why some people accumulate wealth while others don’t.

And while most millionaires spend little on cars, they are also more likely to hunt for bargains and negotiate the price that non millionaires.
They are not loyal to a specific dealer indeed, but go with the one who can offer the best price.

My Note:
Based on The Paradox of Choice categories, if millionaires display this same behavior across most products they buy, they are maximizers. I must warn you though that maximizers are also more regretful and, on average unhappier than satisfiers.

Chapter 5 explains that the biggest indicator of productivity among offspring is whether and how their parents support them.

The authors’ findings confirm what most people knew intuitively when they say that there is a higher propensity to spend inherited money than self-generated money.

The biggest problem though is that freely given money changes people’s behavior and character for the worse.

Many children who inherit an easy life from their families are often very well versed in spending money but ineffective at generating any.

The authors say it often starts with helping children buy a house.
The parents would think that’s OK and the kids won’t need any more help after that. But they’re often wrong.

The “lucky” children who receive a lot from their parents, or ECO as the authors calls them, develop bad habits for a lifetime.
They:

Based on Stanley & Danko research the best gift you can make to your children is the tuition.

The second is to create a supportive environment that rewards education, individual achievements and responsibility.

They say it’s not necessarily bad to give to your children as long as they are disciplined and they can generate their own income.
It’s very uneducative and damaging though when the children can only survive on parents’ handouts.

Here are a few rules on how wealthy parents can grow smart, independent kids:

The authors say that most people never produce high incomes -including self-employed and business owners-.

But professionals servicing the high-income individuals instead often get wealthy themselves.

And the next decades there will be a large number of wealthy individuals who will need specialists to serve them.
Some in-demand specializations the wealthy spend on are:

Most of the affluent are business owners and self-employed professionals.

Business owners and self-employed are four times more likely to be wealthy than people working for others.
But that doesn’t mean you should have your own business: most businesses fail.

And there’s no magic industry because you can be a millionaire in any profession.
At the end of the day, the most reliable way to becoming a millionaire is to work on yourself. Because the character is more important than the business. 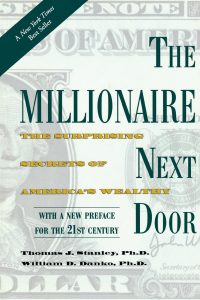 If consumption is costing your freedom, you are spending money to imprison yourself.
Get your freedom first, do what you like, and then use your money to buy whatever you want.

Don’t Give Too Much To Children
Giving too much, too freely, is a terrible education for your children. You are teaching them to be dependent and… Poor.

No Case Studies
There are no hard cases of the households making 80k and becoming millionaires.
Those would have been interesting.
Where do they live, what are they giving up, how did they invest, what did they inherit from their parents?

Little Data
The research is probably solid, but the data the authors present is not always scientific.
I enjoy a well-written book, but a few more numbers wouldn’t have hurt.

You Won’t Necessarily Become Millionaire
Just because you learn how to act like millionaire acts, it doesn’t mean you’ll necessarily become one.

I really loved how “The Millionaire Next Door” offers an overview of the psychology and personality profile of the millionaires.

It also provides a good overview of millionaires from a sociological and ethnographical point of view.

Overall, “The Millionaire Next Door” is a good book and I recommend it.

Read below for a deeper reflection on the main topics and the implication on a happy and meaningful life.

But I wonder how do they know that for sure. I would wonder instead if the millionaires they portray value security the most (the most important need according to Tony Robbins).

And if that’s the case, I would wonder if spending more on life experiences would actually make them happier.
Spending on experiences has been shown to be the best way money could possibly buy happiness, so it’s an important question.

And at this point I would ask: is your goal becoming a millionaire or is it living a great life (or both)?

Having a meaning for your life is important for a significant, satisfactory and happy life.

And I would wonder if people spending so much effort on wealth accumulation have any time or space left for any other meaningful pursuit.

Because, usually, wealth accumulation doesn’t provide a strong enough meaning for a beautiful life (also read Man’s Search for Meaning for Viktor Frankl’s take on what makes a meaningful life.)

The main concept of this book is revolutionary for many people who were never taught any better.
That concept is that high expenditure sells your freedom away. And often, it sells it very cheaply.

If the new car toy, big house and 5 stars hotel is nice, they are also keeping you chained to your job.
So the next question is: do you like your job?
Because if yes, great. If not, you are imprisoning yourself.

Definitely something to think about.

Read more book summaries or Get the book on Amazon