The Power of Positive Thinking teaches readers that positive thinking, especially when mixed with faith, will revolutionize your life for the better.

About The Author: Norman Vincent Peale was an American minister who helped popularize the concept of, you guessed it, “the power of positive thinking”.

About The Book: “The Power of Positive Thinking”, together with Think and Grow Rich and How to Win Friends Friends and Influence People is possibly in the top 3 of the most popular self help books of the 20th century.

As much as positive thinking will improve your life for the better, negative thinking works like a fulfilling prophecy that will make your own fears a reality.

On the other hand, when you think positive, you make your positive thoughts a reality.

For example the author’s magazine was going through a very difficult time. How did they solve the issue? They all had a meeting visualizing more subscribers and guess what happened… ?
Yep.
Of course, that doesn’t prove anything because correlation is not causation, but I’m the usual nitpicker :).

Your world is the thoughts you have about your experiences

“The Power of Positive Thinking” applies to social relationships as well.

If you naturally like people and show an interest in them, they will likely like you as well.
And conversely, if you are self centered and too much in love with yourself, people will find it hard to like you.

Many Are In Your Same Situation

Albeit at times we might feel like our issues are unique to us, the author says that millions of people either have the same issue, or have had the same issue.

And, here’s the great news: there are countless of people who have overcome exactly what you’re going through.

Don’t make all the problems your own. We have limited time on this earth, so don’t try to solve everything.

Vincent Peale says that worrying is the source of both physical and psychological diseases.
And he was right.

But the good news is that you can get rid of worrying.
How to do it?
You simply have to believe that it’s possible to get rid of it.
Then you can use a simple, yet powerful technique: get rid of your negative thoughts. The next step is to replace the negative thoughts with positive ones.

Also read How to Stop Worrying and Start Living. 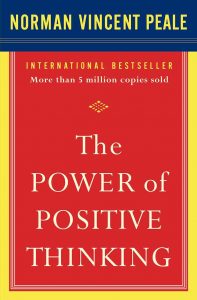 Here is one more pearl of wisdom which I loved:

If you are feeling stressed out and tense, the author recommends walks in the woods to decompress.
Anything reconnecting you to nature and far away from the hustle and bustle can be effective.

The concepts of The Power of Positive Thinking can be transformative. But they are also quite simple and the book could have been shorter.

However, if you read my book reviews, you’ll notice that’s a gripe I often have: I think indeed that most books could be shorter.

The author should have read Fooled by Randomness by Nassim Taleb to understand how humans see trends, patterns and correlations when, often, there are none.

Norman Vincent Peale confuses correlation with causation. Such as, he believes that because A and B happened one after the other, then A must have caused B.
But of course we can’t be sure of that in the slightest.

Many people have criticized Pease, and the book, for being religious.

Well, I can see where that criticism comes from.
But on the other hand, Vincent Peale was a minister.
I mean, what else do you expect? 🙂
You read Mein Kampf from Hitler, and would you be surprised the book is racist?
That being said, religiosity doesn’t necessarily have to be a con in my opinion.
As a matter of fact, religion can help provide faith, hope and a strong psychological foundation for many people.
But if you’re looking for a more secular resource, and a resource which is more science-backed, then “The Power of Positive Thinking” might not be the book for you.

If you don’t mind too much the lack of scientific backing and if you can manage to fully embrace the message,  then “The Power of Positive Thinking” is a book with a strong uplifting spirit.

Don’t let all the critics and imperfection sway you: thinking positive IS important.

It’s interesting that “The Power of Positive Thinking” has been so severely criticized while Think and Grow Rich or The Secret have been endlessly lauded while presenting equally unscientific theories.

Similarly, more acclaimed books such as You Are the Placebo claim scientific backing while actually presenting little or no evidence.

It’s probably because “The Power of Positive Thinking” is based on religion instead of woo-woo “science”.

And while I didn’t particularly enjoy all the Biblical references, I otherwise find it quite good overall.
The simple concept of thinking positive and searching for a positive angle in all your life events is a huge game changer. And shouldn’t be underestimated.

By the way, this book is also one of the favorite of Tony Robbins.
Robbins doesn’t need any intro, but he is the author of one of the best self help products out there: Personal Power II.

Read more summaries, book reviews, best books or get The Power of Positive Thinking on Amazon