In The Relationship Cure author John Gottman focuses on emotional intelligence and “bid for connections”.
Such as, how partners open up for emotional bonding and what it means for relationships.

A bid for connection can come in many forms. It can be a question, a touch, a comment, a gesture… Any expressions through which someone wants to feel connected with you.

How people respond to bids as a huge, huge effect on relationships.

Responding to Bids For Connection

There are three ways to respond to bids for connection:

The man is at the computer to fix an important work issue. He looks nervous and worried. The wife gets up and silently puts a hand on his shoulder.
If he reaches out to her hand, or turn around and touches her, he’s turning towards. If he keeps ignores he, he turns away. If he gets angry and tells her not to touch her, he’s turning against.

It’s not always to recognize bids. Sometimes a question or a comment can be “transactional”, such as it has not deeper meaning beyond getting something done or conveying a certain information.

Gottman says that it requires emotional intelligence and getting to know the person well.
Once you know the person, you will better understand them and will also recognize where, when and how they’re more likely to make emotional bids.

Sometimes bids are not even made but are hidden behind a complaint or a criticism. It’s what Gottman refers to as the “longing behind the criticism” in Ten Lessons to Transform Your Marriage.

For example, if you’re at the computer and your wife complains to you that you’re always working, she might not really be tired of you working so much.
But she might be actually making a bid for connection in asking you to turn towards her care more about her.

After a bid for connection has been rejected, people usually don’t try it again.
Gottman says people only retry in 20% of the cases.

Women make bids for connection at the same rate independently of the health of their relationships.
Which, Gottman implies, give men more power to turn around those relationships for good.

Men keep having the same chances to emotionally connect even when things are not going well.

Emotionally intelligent families teach children to accept their feelings and to handle them appropriately. They value emotions and the expression of emotions, which is key in raising healthy children.

Some other families dismiss feelings or disapprove of them.

Children are subtly -or non subtly- discouraged from showing feelings. When a kid or a family member is emotional or too sad, the family turns away (or against).
Minimizing feelings is also in the same category (ie.: “oh come on it’s just a toy”).

Gottman also doesn’t believe people should force themselves to be positive. He says that experiencing all emotions is the better options. 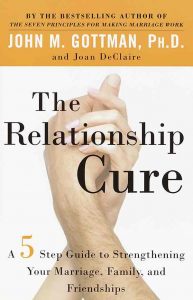 Watch out for bids!
Take care of bids for connection, they’re the main building block of relationships.
I see people missing those all the times, and that’s where relationships turn sour and partners feel lonely. This goes for any kind of relationship!
Check out: 4 communication mistakes men destroy relationships with.

To build an emotional connection..
… Turn towards that person emotionally as often as you can.
This is the greatest advice since How to Win Friends and Influence People.

I think this bidding concept is waaay too underrated and way too misunderstood.
In a way, I’m glad Gottman dedicates a whole book to it. But in a way, I’m also angry that the Relationship Cure, in my opinion, doesn’t do a great job in clarifying and exemplifying what bids are.

Atypical of John Gottman’s books, I found The Relationship Cure to be a bit fluffy. The concept is fundamental, but it’s also simple and it could have been said in a briefer fashion.
Instead it covers lots of topics that Gottman cover better in other books such as The 7 Principles for Making Marriage Work and Why Marriages Succeed or Fail.

Gottman talks about the “emotional command systems” but honestly I failed to see much relevance in there (let me know in the comments if you think otherwise!).

And getting into micro-expressions and body language was yes relevant, but trying to explain these complex topics in a few paragraphs felt out of place.

If you’re unaware of bids for connection, I recommend you look into it. “The Relationship Cure” is a great start.