The Third Wave explains that the digital revolution unfolded in three different waves. The third wave is just about to start, and Steve Case explains to aspiring entrepreneurs how to ride it to success.

About The Author: Stephen Case is an American entrepreneur, investor, businessman and author. He is the former CEO and chairman of America Online (AOL).
Stephen has both the experience and the credential to talk about digital entrepreneurship. And, with 1,3 billion of net worth, he also has enough financial firepower to put the (investment) money to where his mouth is.

It was about building the platforms and infrastructures that made Internet possible.

From an entrepreneurial point of view, it was about partnership and alliances with hardware PC makers to install modems and with cable companies to allow for dial-up connections.

It has been about the mobile revolution.
The companies in the second wave had the business model of acquiring lots of users and then monetize later.
Many of them needed little support and no partnership and thanks to virality could become an overnight success.
The second Internet wave is the Internet of things.

Internet will penetrate into industries that have still not been touched by the Internet revolution.

Steve Case, for example, says that walking into an hospital is like taking a time machine.

What It Takes to Succeed in The Third Wave

In the second Internet wave, you could have worked by yourself and pulled it off only thanks to your customers and users. Facebook, for example, didn’t need any hardware, early partnership or government approval.
A guy in a dorm simply rode the wave of a virally expanding service.

That won’t happen with the third wave of Internet, which instead will require:

Product and virality won’t be enough.

You will need partnerships with the key stakeholder who function as gatekeepers.
If you want to disrupt education, for example, you need the support of both government agencies and school principals. In turn, these people will have influence over the final consumers (government agencies on schools and principals on mothers).

The catch 22 of the third wave of Internet is that entrepreneurs will need partnership to get funding but they will need funding to more easily start partnerships.

Government plays a huge role in the third wave.
We need government to support the third wave and the third wave entrepreneurs need to work with government.
For example, any nutrition company, even selling directly to consumers, will need the approval of each relevant regulatory body.
The attitude of going on your own won’t cut it anymore, so drop the “disrupting” keyword from your vocabulary (and Steve Case has little patience for it).

Every company in every field and every wave needs perseverance.
But this is even more true in the third wave, where headwinds also come from policy makers and partnerships (while that wasn’t the case with the second wave).

The Three Sectors Ripe for Disruption

Steve Case sees three sectors which are ready and ripe for disruption. They are:

Walking into a hospital is like taking a time machine in the past, says the author.
It’s inefficient and full of mistakes that the Internet of everything can easily help fix.
For example, doctors shouldn’t rely on the patient telling them about the symptoms when mobile technology can constantly monitor our bodies. As a matter of fact, we often won’t need to check up visits when we can monitor our vital signs daily.
Doctors can be warned of anomalies in real time.

How can a whole class full of pupils with different attitudes and strengths learn efficiently all together?
The future will be individualized, personal learning.

We talked a lot about nutrition here (and even wrote a guide on ideal nutrition). The third Internet way will make the whole value food value chain more efficient. 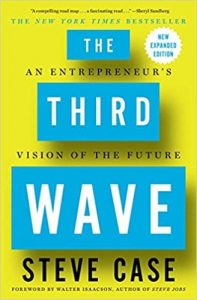 This is crucial for future entrepreneurs

Drop The “Go At It Alone” Mentality
This is a mentality that many entrepreneurs have (and that I have myself). And that’s of seeing entrepreneurship as opposing the government.
Of seeing yourself as the disruptor and the status quo as the enemy. This is a mindset that also Peter Thiel in Zero to One warns you against.
That type of mindset makes you enemies and doesn’t help you any.

As a side note, I am happy that this is not the case for my business so far as I like going at it alone :).

This is Steve Case talk at Google:

The Third Wave talks about “talent war” and how the US can stay the leader of the Internet revolution.
I am not too fond of that kind of thinking. We are in a global world, we are talking about the third wave… And he talks about how one nation can “stay dominant”.
Jingoist mindset is narrow mindset in my opinion.
As Robert Greene says in “The Laws of Human Nature“, we belong to the human race. Anything else is backward and far too dangerous.

Steve Case only tells the truth, but at times one should be careful even when telling the truth.
It’s possible that some might think it’s a bit braggart to say “I was only 32 when I became CEO”. Or when talking to Steve Jobs he says he was “hoping people would not recognize them to let them talk in peace”.
And the description of AOL as being Instagram, Facebook, Google etc. All rolled into one also might seem bragging (albeit, again, there is a lot of truth in it).

The central tenet of the book -how the third wave will be different and what it takes to be successful- is eye-opening (and makes a lot of sense, at least on paper).

If you read the full version of the book you will learn a lot about all the shady business going on in running a successful, disruptive startup.

For example, Steve Case had to step down as CEO to go public because he was too young.
Or even more interesting, Bill Gates threatened AOL that if they weren’t going to sell he was either going to buy it or crush it (with MSN pre-installed in PCs). Bill Gates, like many hyper-successful businessmen, was ruthless (see “corporate manipulations“).
Or again, it’s very telling of the true corporte warfare that AOL once survived because they got 3 million from suing Apple on breach of contract.

That stuff is eye-opening. This is what’s going on in some of the busines, world guys.
Get ready to defend your company from the sharks out there. Even when those sharks look nice and polished.

I was surprised to see that “The Third Wave” didn’t get higher ratings in the Amazon reviews –which is why you shouldn’t trust Amazon reviews-.

I absolutely loved the Steve Case’s analyses and I personally consider it to be very valid and helpful both for new entrepreneurs and for VCs who need to pick the next winning teams.

Yes, I recommend The Third Wave to entrepreneurs and investors alike.