In To Sell Is Human author Daniel Pink look at sales and how it’s changed in the era of the digital revolution, new scientific research.
Pink says that an ethical approach to sales is the most effective approach you can take in this day and era.

To Sell Is Human – Summary

About the Author: Daniel Pink is an American author. He has a degree in law and worked in politics as the chief speechwriter of Al Gore.
He also wrote Drive and When.
I find Pink to have a knack for mixing good scientific research, psychology, and great storytelling.

In a way, Danie Pink’s books are somewhat similar to Malcolm Gladwell but, in my opinion, more scientific and rigorous.

Daniel Pink makes the point that manipulation and an unethical approach to sales can work as long as sellers know more than buyers.

When sellers have more information than buyers can ever gather, buyers are the mercy of the sellers and they must beware.

That’s when Daniel Pink introduces Joe Girard, the poster child of the lying salesman who’d say anything to create a fake bond and make a sale.

People can also much more easily share information about lying salesmen and poor companies, making the costs for cheating potentially much higher.

The Three Steps to Prospect Taking

Daniel Pink says that research shows there are three steps to effective prospect-taking:

My note:
Step two was rather unclear to me and not very helpful from a practical point of view.

Most people believe that extroverts excel in sales positions because they naturally like people and enjoy people’s interactions.

But the link between extroversion and income is tenuous or non-existent.

To be clear, extroverts do hold an advantage over introverts in sales positions, but they don’t do nearly as good as ambiverts do.

Ambiverts are people who are in the middle of the extroversion spectrum and present traits of both introversion and extroversion.

Extroverts hold a slight advantage on introverts, but they often fail in sales because they tend to talk too much, ask too few questions and, to use Daniel Pink’s words “stumble over themselves”.

Also read here on how to become an ambivert:

But the short of it is:

Martin Seligman found out that dogs -and later, people- give up trying when they (mistakenly) learn that they cannot do anything to change their circumstances.
When that happens, of course, there are no chances of succeeding because the organism simply fails to take action.

And in human beings, learned helplessness is usually a consequence of negative explanatory styles.
Explanatory styles are different forms of self-talk that take place after the event has happened.

A negative explanatory style after a boss has yelled at you would look like this:

People with a negative explanatory style explain events as:

Research also shows that salesmen with an optimistic explanatory style oversell those with a negative style by 87% (top 10% VS bottom 10%).

Researching for “To Sell Is Human” Daniel Pink visits a sales training that has its roots on improve theater.

The rules for good selling from improv theater are:

Don’t focus on the “no” or the lack of “yes”. Often behind a lack of yes there are ideas and paths that can lead to success and win-win.

Explore them by getting out of the mindset that you must “overcome objections”.

Don’t say “yes, but…”, which is a major rapport breaker.

Use “yes” and then redirect and go along with the prospect instead, which will help you listen and empathize instead of a combative mindset of “overcoming rejections”.

Daniel Pink mentions “Getting to Yes” and “7 Habits of Highly Effective People“, two best-sellers that popularized the idea of looking for win-win negotiation.

On saving face also read: How to Win Friend and Influence People.

Robert Greene, author of “The 48 Laws of Power” said that “self-interest is the currency that makes the world go around”.

Yet research shows that appealing to the interest of our customers can yield much better results (example of nurses reminded to wash their hands for the patients’ benefits). 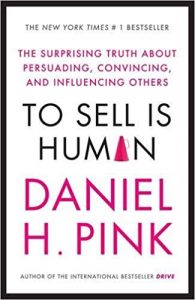 If you take one thing away from this summary of “To Sell Is Human” is to please drop the mentality that you must overcome objections.

That mindset makes you an annoying dic*head.

Using some mild profanity such as “damn” in your speech will increase the persuasiveness of your speech.

Too many choices can lead to decision paralysis (also read “The Paradox of Choice“).

Adding a small drawback in an otherwise good list of positives increases sales as long as the blemish is last and the prospects are not into “full critical mode” but instead slightly distracted.
What happens psychologically is that the weak negative information increases the salience of the positive information (contrasting principle).

The challenger is better off to present last. The market leader first.
Read an overview of how sequence and numbers affect pitches.

“To Sell Is Human” ends by inviting the readers to ask themselves if people’s lives and the world will improve after they’ve done the sale.
That reminds a bit of the spirit behind “The Go-Giver” and “The Greatest Salesman In The World“.

I love the spirit and the idea of adding value to people and the world. But it’s also somewhat naive to expect that success can only come with that mindset.

The message that ” we are all selling” is an old cliche’ often repeated in many sales books.
Somewhat, I don’t fully agree: there is a big difference between “selling yourself and your ideas” and “selling products as a profession”.

As “How to Lie With Statistics” shows researches and statistics can be used to make any point, and in my opinion, they are even more dangerous because they can provide a semblance “of truth”.

There were a few instances in which I felt that the words “research says” were used to give a semblance of certitude where there cannot be any certitude.

I felt that the author jumped to some misleading conclusions with some researches.
For example, he says that granular numbers are more effective than coarse numbers, but then the comparison was not between similar products and “effective” is a major generalization considering the research only measured a very specific product characteristic.

“To Sell Is Human” moves from self-promotion to sales ethics and morals to when to present for maximum effectiveness to, as well, what improv theater teaches how to sell better.
It feels somewhat disjointed at times and more like a random collection of researches and psychology papers.

In my opinion, some advice was poor.

For example, the author says to “count all the rejections you got” to understand that rejections don’t kill.
But unless one already has an antifragile ego, focusing on rejection can be both painful and harmful.

The author presents Seth Godin, introduced as “marketing guru”, to advise selling from a position that the customer is always doing the salesman a favor.

This connects to the principle that “lowering your status” can help in attuning to the customer.
But I disagree here: it’s a big generalization that doesn’t hold true in many selling situations.

Daniel Pink delivers some great pearl of wisdom when it comes to the psychology of selling and psychology of happiness and self-development.

For example, he debunks the common misconception in sales that it’s best to always tell oneself that “you can do it, you’re the best”, which is bandied by basically all sales books.

And he explains that too positive self-talk has an upper limit and that some negative or critical self-analysis is helpful (also read: how to leverage failure).

I absolutely loved the sarcasm of these two lines:

Joe Girard is the world’s greatest salesman.
I know, because he told me.

Then, a little later, says Pink:

But there is one more thing you need to know about Joe Girard. He hasn’t sold a car since 1977.
He quit his business more than three decades to teach others how to sell.

Daniel Pink actually reads his audiobook himself. I appreciate that, and the other listeners will too because he can make that writing come alive.

To Sell Is Human – Review

I don’t fully agree with this idea that an ethical approach to sales -and success- is the best and most effective approach for your bottom line.

To me, it’s very polly-annish.
I wish that an ethical approach to anything in life was the most effective.

The evidence that any critical observer can gather is clear: an ethical approach to life offer no inherent advantage when it comes to personal success.
Also read:

Aside from that, I absolutely loved “To Sell Is Human”.
It’s a wonderful book and, for my personal taste as a sociologist, a  psychology buff and a lover of the scientific method, it’s also the best book I have ever read on sales.