A Random Walk Down Wall Street makes the case that the stock market moves randomly in the short term, and it helps readers understand how they can leverage that knowledge to improve their investment strategy.

About The Author: Burton Malkiel is an American economist and writer.
Burton largely espouses the efficient-market theory over the long run. But he adds that there are exceptions and, in the short term, markets are much more random than economists had long believed.
This is a position that behavioral finance has eventually confirmed (see Thaler, 2016)

Foundations and Castles in The Air

Burton says there are two ways of approaching investment:

Castle in the air is based on following trends and emotions.
And it’s not necessarily a poorer alternative as it can give much higher returns.

An example of Castle in the air investing would have been to invest in cryptocurrencies when the hype was reaching the early majority and about to go into a buying craze.

Malkiel reviews a few of the financial bubbles over the years, such as:

The author says that the markets always return to roughly the pre-crush levels.
It’s because markets do tend towards efficiency and after the irrational binge they tend to get back to rational levels.

Malkiel introduces the two main anaylisis people use to decide when to buy:

He severely criticizes technical analysis, saying that most correlations are dubious and that when you focus on charts you’re focusing on the micro and losing sight of the macro.

Indeed, when a completely random chart was shown to some famous “chartist”, they couldn’t tell the difference between a random walk and a real stock’s movements.

The author has more respect for fundamental analysis, but he says that’s also lacking.

No only the whole idea has several flaws, but the results are poor.

He says that analysis who were asked to predict the price of a stock within 5 years were very inaccurate.
They shorten the period to one year and they were even less accurate. And it wasn’t a question of industry: no industry turned out to be easy to predict.

Basically the central thesis of “A Random Walk Down Wall Street” is that stocks move in a random pattern which cannot be predicted.

The shorter the timeframe, the more random the movements will be.

However, long run, the trend is upward.

It’s flipping a coin – with a slight upward bias

They question is, how long:

Anything Less Than A Decade It’s Pure Randomness

The author says that the past is a very flawed indicator of the future.

Yes, over a long period of time stocks will likely outperform bonds and will beat inflation, but in the short term there’s no such guarantee. And in periods shorter of a decade, it’s basically random.

That’s why Malkiel believes that Target-Date Funds are a good idea because these de-risk as your chosen date -often retirement- approaches.

My note:
This is contrary to Robbins in MONEY Master The Game, who says the idea that bonds are less risky is wrong because stocks and bonds can often move in the same direction.

If you can’t beat the market -and if even trying would require so much time and effort-, what are the alternatives? The author recommends: 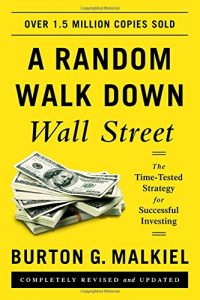 I mostly agree with Malkiel.
Yet, there are also important holes in his theory that he should have addressed.

There ARE exception who manage to beat the market in the long run and Buffet uses fundamental analysis that Malkiel says doesn’t really work.
And it would have been interesting to read about the exceptions to the rule.

Any new young man who thinks he can make money in the stock market should read “A Random Walk Down Wall Street”.

This text will hopefully help them see that trying to beat the market is mostly a fool’s errand.

As a sociologist and as a website focused on psychology and social psychology, I particularly loved the analysis of the human aspects of investing.