Dealing with offensive jokes can be difficult if you’re not used to.

As an Italian living in Germany I deal with these on a recurrent basis: 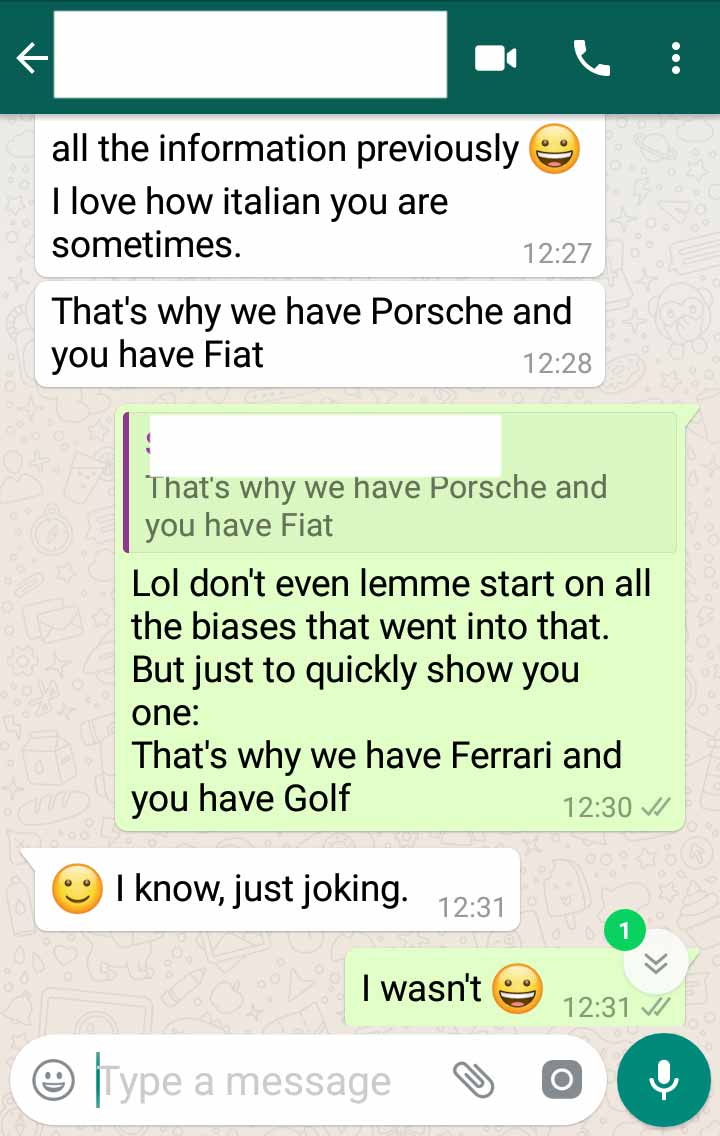 Racist jokes, offensive remarks, mean comments… These are all a form of social power moves.

Hidden under a sheath of irony, offensive  jokes tell the story of a power relation: the joker is the one taking the dominant position, while the butt end of the joke gets socially demoted.

I will call this technique “social climbing jokes”.

The joking layer with which the power moved is sheathed allows the joker to set the power relation in a socially acceptable way.

Basically: the attacker hides behind the joke to hurt and social climb.

And it allows him to sidestep any possible backlash behind the joking pretense.
I’m sure you’ve seen these:

Social climber: Hey come on, it was just a joke

But don’t be fooled by the “joke” pretense, most of the times that’s only the sugar coating for the dominant power move.

When you put your social x-ray goggles on this is what a superiority joke really says:

The Social Consequences of Mean Jokes

The joke can have lasting consequences.

If it’s not met by any backlash, the public opinion can start shifting.
Not only it becomes more OK to throw mean and racist jokes, but some people can start believing they are actually true.

Until the joker doesn’t even need to throw power moves anymore: everyone accepts his superiority.

Power jokes happen more often than most people could think.

Some men use this technique to keep control of their relationships (see “combative relationships“).
And when they are successful, the woman can start losing her self-esteem, which might lead to abusive and toxic relationships.

Or people can use offensive jokes are used to pump their own ego or, of course, for good old social climbing.

Here are a few examples:

White guy in Asia: “I’m whiter than you”
Girl: “so what, you think you’re better than me?”
Guy: “ahaha I’m just joking, in Europe it’s actually cool to be tanned”

Result: behind the joke’s smokescreen -and helped by her offended reaction- he slots himself as the superior one by virtue of skin color.
In the long run she will feel insecure and inferior to him.
Notice that her overreaction proved to him that she indeed has skin-color hang ups.

Guy: “you bought a new pair of shoes?”
Girl: “yes, do you like them”
Guy: “yeah.. And good for my figure you don’t spend as much time in the kitchen as do with shopping”

Result: he implies she spends too much and that her role is that of cooking (and she’s failing it). In the long run she might feel insecure and less of a woman for failing in what he presents as her female duties.

The mean joke in the message example at the beginning of this post was basically saying:

Result: If I left all these jokes slip I would contribute to these type of jokes becoming more and more pervasive and, worst of all, I might start believing it myself.
Also, I would admit that yes, he’s right, and there are good reasons why Germany is a bigger economy (namely because Germans are superior).
I don’t know you, but I’m not cool with that.

When someone pulls a power move disguised as a joke, you should react.

Because taking the hit without pushing back does a few bad things:

Here are a few ways of hitting back:

Make a mean joke back about them, their ethnic group, gender or whatever you can think.

If someone were to exaggerate here with those German / Italian jokes, I would go with something like this:

The Romans did their best to civilize the barbaric Germanic tribes here. Obviously not everyone joined the civilized world

Don’t laugh. Just look at them and they will understand what’s up.

#3. Call Out Their Rudeness

You can draw attention to their meanness, rudeness and insensibility either with a zinger of a comeback, another joke or simply seriously pointing it out.

No need for anything too complicated, this is enough:

Sorry man, I don’t see the fun in that. It just feels very rude to me

When you do that you will go from defender to attacker. At which point:

When you accept the “I was kidding” right away you let the power mover get away too quickly and too easily.

And, most importantly, you let the joke sink in.

Letting the joke sink in means you and the people around accept the power moving consequences of that joke (ie.: that they’re “better”).

Push back further, let them roast for longer in the apologizing limbo (That’s what I’ve done in the text above when I said “I wasn’t“).

You: that wasn’t really funny
Joker: come on man, it was just a joke
You: I know you’re joking, but it was offensive

By pretending to buy into their joking excuse while you stick to your guns, you are taking their excuse away.

#5. Avoid Exaggerating: But You Can Hint You Could Win Easily

But when you do that you show they got to you too powerfully.
And you let them drag you down to the low level games. Stay superior instead: don’t wallow with the pigs but fly with the eagles.

You can though hint that you might destroy them easily.
For example, you could say:

Look, answering to that would be too easy, but I don’t stoop lower just because someone has gone low.
So I will ignore it and move on.

Going meta means that you explain what they just did.

Basically, you give them a shortened form of this article:

Well, not really, people say it was a joke, but the joking form is only a more acceptable form of sharing racist feelings and aggressive opinions.
If you feel that way about me or about X, you should tell me openly.

And watch them backtrack in shame.

Battles always run at a mental level as well.

When you overreact, you communicate that you are emotionally very sensitive.

And when you’re emotionally very sensitive to something, people will suspect it’s because you actually feel that way (ie.: if you overreact if someone tells you that Germans are “superior” you communicate you actually believe in that).

As George Thompson says in Verbal Judo, if you learn not to take things personally, you are 80% done.

If you find yourself feeling offended a bit too many times, well, probably it’s not society being wrong but it’s just you.

Don’t be that guy who always overreacts, always calls out racism and always gets offended for gender humor.
Nobody wants those people around.

Here are a few examples of innocent stereotype jokes:

Exceptions: Jokes You Shouldn’t Get Offended For

Sometimes jokes which might sound offensive can actually help you further your relationship.

Racy jokes are also a way of getting more intimate.

The more someone can push the boundaries without repercussions, the closer you two are.

Having dated Asians and black women, my jokes with them would have been terribly offensive outside of our intimate settings.

But by making that joke we entered a frame which communicated that “we can say whatever we want to each other”.

In that case, racist jokes can only bond you closer.

Of course, the delivery is all that matters: it must come from a position which is not truly racist, but just fun-making.

Sometimes some people will make a mean joke about a group that neither of you belong to.

Before you get offended and tell him that’s not cool, consider the joker might have actually tried to get closer to you to form an ingroup with you.

Of course, these jokes are dangerous if you get carried away with them and they become the norm.

Some mean jokes and racist jokes are masked power moves. Ways of implying the superiority of the joke teller, of his ethnic group, or of his power position in the relationship.

Never allow those jokes to pass you by or you are tacitly confirming their power play and help crystallize their position of power over you.