Then, it shuld follow he has a lot of it, right?

He always says he loves people and always talk about Emotional Intelligence.

Then… He must be good with people and have EQ in spades.
Right?

Why Gary Vee Has Low EQ

Whenever I look at videos online, I analyze patterns.

I look for good communication, for power moves, social dynamics and for dominance signs.

When I saw this interview between Gary Vaynerchuk and Seth Godin I was shocked.

Rarely I had seen such a better example of… Communication breakdown.

No bashing on Gary Vaynerchuk, but when it comes to how to talk to people, he does everything wrong here. And you don’t need to take my word for it: Seth Godin threatens to get up and leave at a certain point.

We will use Vaynerchuk basic conversation mistakes, plus a few more examples, to avoid the biggest conversation pitfalls.

So let’s dive in to make sure you don’t make any of those anymore:

#1. Interrupts All The Time (0 Listening Skills)

This is one of the most important rules of talking to people well.

And one of the biggest reasons why most people fail to have good conversations (as explained in the fantastic book Difficult Conversations).

Indeed the more we care about a topic, the more emotional we get and the more we want to interject and dominate the conversation.
However, this is terrible both from a communication point of view and from a rapport point of view.

Our conversation partner will not listen when you interrupt them or monopolize the conversation.

Mental resources are not infinite.
And they will be busy dealing with bad emotions towards you, thinking what to say next or strategizing to win the argument.

When you let them finish instead, and possibly even help them along the way, their mind will be clear.
And they’ll like you and respect you a lot more, which translates in more empathic listening.

And when you talk too much, people cannot bond with you.
All they hear is an egocentric “me, me, me”.

The second reason is that when you jump with your own opinion you think you know what they wanted to say, but you often get it wrong.
And it will feel like the two of you are out of sync.

Exception: When She Wanna Impress You

In dating situations it can happen that a girl is so willing to impress you or fix a previous mistake that she  can’t help but jump in.

In that case, you should not take it as an affront, but as a sign that you’re holding sway.
Smile as if to say “you just interrupted me, but you’re adorable so I’ll forgive you”.

2. Seeks Differences (instead of building consensus)

Whenever an idea or an opinion run against what we believe in, our natural tendency is to fight it.
And to prove that we are right.

Ideally, that would be OK and we could all argue hard without any harm to our relationships.
But that’s not the reality of the world we live in.
So choose: you can either have rapport or you can focus on who’s right. 99% of people on this earth cannot have both.

From the example above, what good does it make when Vaynerchuk says:

Seth Godin is talking about science, how can he feel when someone says he “hates” what he just said is one of the coolest things that happened to mankind?
Obviously, he feels like there is no rapport there.

This holds true most everywhere -including at work where it shouldn’t-, but it holds even truer in (early) romance:

Many years ago I went back to a girl’s place with a bottle of wine as we chatted and flirted along the way.

That must have been an easy one, right? Well, it should have, yes.

But when she aired her very left wing opinions on genders, gypsies and “integration policies” this dumbas* escalated what was a bonding conversation into a discussion (super un-sexy).

I started explaining why my ideas were “right”, and I wanted to prove it. I wanted to win.

Of course, there are no winners in those scenarios, only losers.
Rapport was shattered, romance was gone… And I went home in my hand’s company soon after :).

Gary Vaynerchuk seem to make it a point to disagree, interrupt and seek confrontation.

He is a master rapport breaker.

Look at the video below.

Any “rational” person would agree 100% with Seth Godin. And we could argue he “won” the argument when he refused to give in -stronger frame- and put science on his side.

The conversation victory comes at the price of destroying rapport.

Example 2 – How to Keep Rapport

This year I had one of the most remarkable dates I have ever had.

She wanted to become a shaman.

She had occult talents, was in touch with otherworldly entities and she was sure aliens live among us. Or so she professed.

Of course the dumber side of me wanted to debate that. And to possibly prove it wrong (argh!).

But thanks God this time I knew better.

I told myself I was going to learn from this and stay nonjudgmental, warm and supportive. So I got curios. I inquired, dug deeper, shared my local stories of occult and.. Rapport and bonding sore.

A “NO” is a conversation stopper and one of the most powerful verbal weapons.

It communicates you fully disagree, that you know better, and that the two of you are miles apart (possibly he’s miles behind).

A “NO” is also often a power move in the sense that it gives power and authority to the person using it. At the price, of course, of rapport and harmony.

I’ll give you a real life example.

A friend of mine wanted to recruit me for a start up she wanted to launch. We had a brief phone conversation, which went a bit like this:

Her: (…) And this is my great idea!
Me: Oh that’s cool, seems like mobile marketing will be key to get traction
Her: No, it’s more about partnerships..
Me: Yeah, that too I guess, both are important. Germany would be a great market to start with
Her: No, I want to start with..

You will notice I don’t answer with “OK” because that would be an admission of submission.

It would communicate that I “OK” her correction and submit to her authority, neither of which was my intention.

I accept instead, confirm what she says as it was also my opinion and then defend and raise my opinion adding both are important.
And then I move to another topic to take the pressure off and avoid an escalation.

But again, she keeps “NO-ing” me -probably 3 times during the conversation-. With every NO she communicates that:

Albeit I don’t fully remember the exact words of that conversation I do clearly remember one thing: I didn’t wanna have anything to do with her project.

Example 2: Never Say NO to Compliments

A “NO” is particularly terrible when people reach out to you with a compliment, a gift or a peace-overture.

It’s because in those times they are, in a way, either submitting to us or raising us up.
And they expect a reward.

When a “NO” is the answer instead, it punishes us when we least expect it and we regret we even opened up (and possibly resent them for making us feel bad). 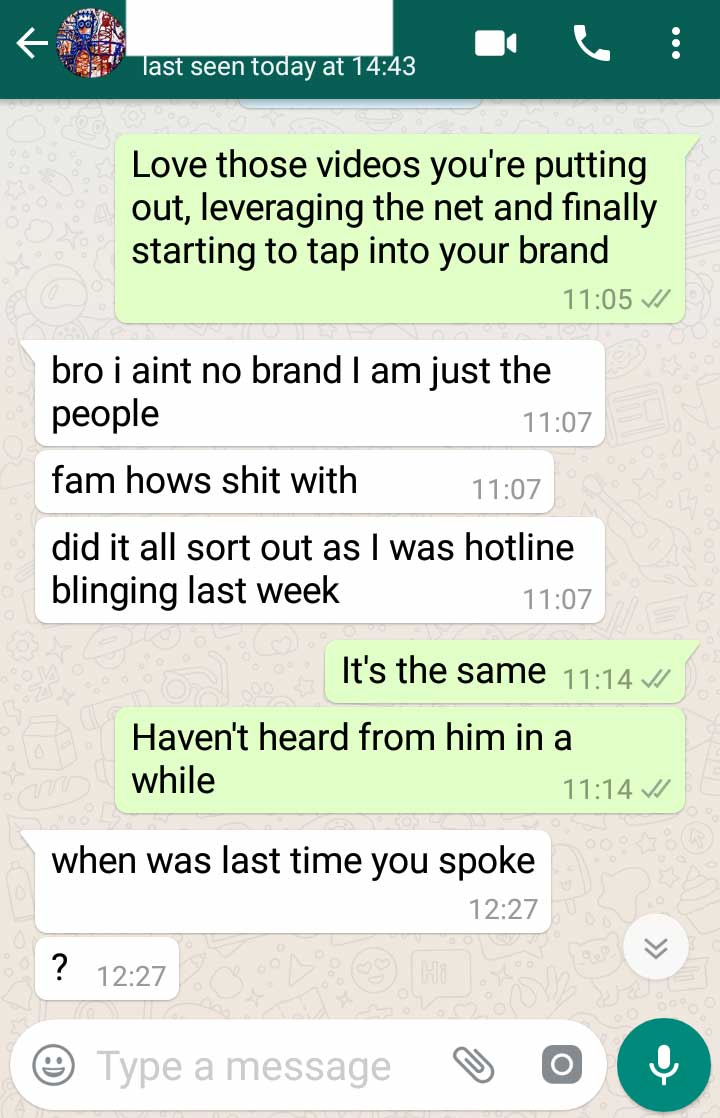 What to do then? You ALWAYS accept the compliment, even when they make no sense to you.

Example 3: There’s no NO in Sales

If you’re in sales, you should totally ban “NO” from your customers’ conversations. Even when it’s called for.

For example, when I was selling a complex product I was often faced with people not understanding it. And they would repeat back to me some nonsensical blabber.

The first reaction would be to say “NO” and correct them. Resist that urge: you never want to break rapport with customers. Let them finish instead, maybe even nod as they speak.

And then you say:

YES, it’s a bit like that. Basically..  (repeat your pitch in simpler form)

or if they were far off the mark:

-Wow, that would actually be a great idea for a new product. This product here… (repeat in simpler words)

-Yeah, that’s a bit like what X company does, they’re cool, what we do.. (repeat in simpler words)

Basically, whatever they say, never answer NO.
If they almost got it, compliment them and then add more information.

If they are far off the mark and you can’t think of anything good about what they said, blame yourself.

Gary has a huge issue in connecting and bonding with people.

He cannot listen, he is always itching to interrupt, he shouts to cut off people and he can never manage to take a conversation deep.

And when it comes to developing an emotional connection, that’s bad.
Because the deeper we discuss things, the deeper we feel like we connect with someone. Especially if it’s deep and personal. That’s the feeling that “you’re meant for each other” with a romantic partner.

The best conversationalists never stop at the surface for too long. They prod and dig until they get to the core of who their conversation partners are.
Staying on the surface is a particularly heinous conversation mistake when people actually want to get deep with you:

Example 1 – Kicking Back to Surface

Often it means they’re about to go deep and open up. That’s when you let them speak and encourage to go further.

When instead you interrupt them, change topic, start sharing your opinion or crack a joke you are basically forcing them back up to the surface.

They feel not only like you don’t get them, but also that you don’t care.
And it’s an immediate, huge disconnect.

This is exactly what Gary does here. Seth Godin wants to make important points he cares about. He wants to properly address the questions coming from the audience. But Gary keeps stopping him.
Vaynerchuk is forcing Seth Godin to stay superficial. And he resents him for that.

For more examples on creating a deep connection, check:

You might have noticed that conversing well requires you to pause the most controversial sides of your character.

Or to dig deeper in yourself to fish for different shades of your personality.

Indeed this is an article on rapport, and full or honesty and rapport do not always fully overlap.

But the two are not antithetic either.

Don’t fall for the lie of those lonely, frustrated few who peddle full honesty as their great quality.
As they go around hurting people and picking fights all day they’re just showing rudeness and stupidity -with other more or less severe personality flaws-.

Indeed, there’s enough overlap between honesty and rapport that you can have both.

Does Gary Vaynerchuk have ADHD, or attention deficit hyperactivity disorder?

I cannot know that for sure, but it definitely seems so.

Gary Vee is very good at screaming from a big imaginary megaphone and getting people to like is posts and soundbites.

But he is terrible when it comes to developing close relationships.
He certainly doesn’t like to hear from people, because it seems more like he’s in love with the sound of his own voice.
Maybe Gary Vee really loves people, but probably more those who give him an audience to parade himself.