Verbal Judo teaches readers how to use words to prevent escalations and get what you want in some of the most challenging situations.

About The Author: George J. Thompson is a former police officer and a communication skills trainer.
As he shares in his own book, he is also a martial arts expert but dedicated his career to use words to get what he wanted.

The author says that verbal judo is about using and deflecting the other person’s aggression to reach your goal.

It’s opposite to “verbal karate”, which is more likely to escalate and leave people’s feelings hurt.

Underpinning the whole idea of verbal judo is to treat people with dignity and respect.

George J. Thompson says that if you learn to not to take things personally, you’ll already be ahead of the curve and barely need any verbal judo.

Most of the interpersonal issues, indeed, are born out of ego (read how to re-build your ego).

Say what you want but do as I say

Empathy is the most critical skill of verbal judo, says the author.

Empathy doesn’t mean to sympathize or approve of him. It means to see through his eyes and understand.

The author says there are three types of people:

With difficult person, George shows early on what’s in it for them.

Following a major tenet of the 7 habits of highly effectively people, Thompson presents the solution he wants as a win-win for both.

“so far you have only done X. if you refuse to cooperate, you will spend the night in jail, get a criminal record and I will have to do a lot of paperwork. If you step out of the car and cooperate, we will be done in 10 minutes”.

This is also a similar technique as presented by former FBI agent in The Like Switch.

Paraphrasing is another key ingredient of effective verbal judo.

Paraphrasing often serves to soften the tone.
Angry people don’t really mean what they say, so when you paraphrase them and use their own words such as “always” and “on purpose” they will soften the tone themselves.

When you paraphrase never ask if they understood you: nobody will admit they didn’t.
Let them repeat.

And to paraphrase them, here’s the perfect way:

Let me be sure I understand what you have said

Verbal Judo has a very interesting chapter about the top phrases to avoid.

I invite you to read the book for the complete list, but here are some that struck me the most:

Here’s Why You Need to Explain The Rules

Because they are being egotists.
The author says that when people refuse to explain they show they are more concerned about themselves and appearing dominant than about the other person’s well being.

And it’s most likely to escalate.

If someone else gives you the dreaded answer “because those are the rules” you could say:

“Could you explain to me why those rules were put in the first place. They don’t make sense to me and if I understood it would be much easier for me to  comply”.

The 5 Steps of Verbal Judo

The author proposes a five-step approach to conversation:

When you present options, make him feel like it’s his choice (saves his face, also read How to Win Friends).
And flash out the stories, give details: make him feel what it’s like to choose the difficult option or the easy one.

The Structure of Verbal Judo: LEAPs

The author provides 5 steps and tool to generate compliance:

He goes into details for each step and I invite you to get the book for the details.

Praise and Criticism: Avoid The Sandwich

I love the author’s take on the typical sandwich feedback technique.

He says most people will not believe your praise at all when followed by a “but” or by a critique.

Do the opposite instead: start with the criticism and what you want to see them improve on.
Then deliver a heartfelt praise which is highly specific. Specific praises are credible and memorable.

React to What People Mean, Not What They Say

George Thompson says to react to what people mean, not to the actual words.

When people are angry they might not really mean what they say or not understand the situation.

Address the underlying issue and concern instead.

The author says the stress on cross-cultural communication can sometimes be more counterproductive than useful.

He says instead something I always believed in as well: what if we focused on the commonalities instead?

Same as the author, I too agree there are more key commonalities than differences. 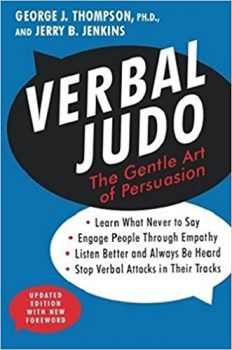 Confront Wimps
You need to confront the people who talk behind your backs or they will undermine you.
Exposure is unbearable to wimps, so if you call them out on it, they’ll disappear like snow on a hot day.

Don’t Say What Makes You Feel Good
… Unless it also makes the other person feel good.
When you’re angry it might feel good to lash out, but it’s almost always the wrong reaction. And you can never really take back what you said.

Albeit he presents himself as a man of words and not brawns, Thompson often comes across as a bit of a macho.
And, in a couple of instances, even slightly braggard.

Verbal Judo is a treasure trove of great communication tools.

It’s up there with the best of them, like Difficult Conversations and I liked it even more than Crucial Conversations.

I absolutely recommend you to get it.
This is only an overview and the examples in the book are what makes the difference.

EDIT:
As I reviewed the best communication skills books, I moved “Verbal Judo” from 5 to 4 stars.
It’s still up there with the best ones, but not as good as “Difficult Conversations” in my opinion.