The 7 Habits of Highly Effective People is the biggest self help book seller of the last thirty years. And while that doesn’t necessarily mean high quality… It does in this case. 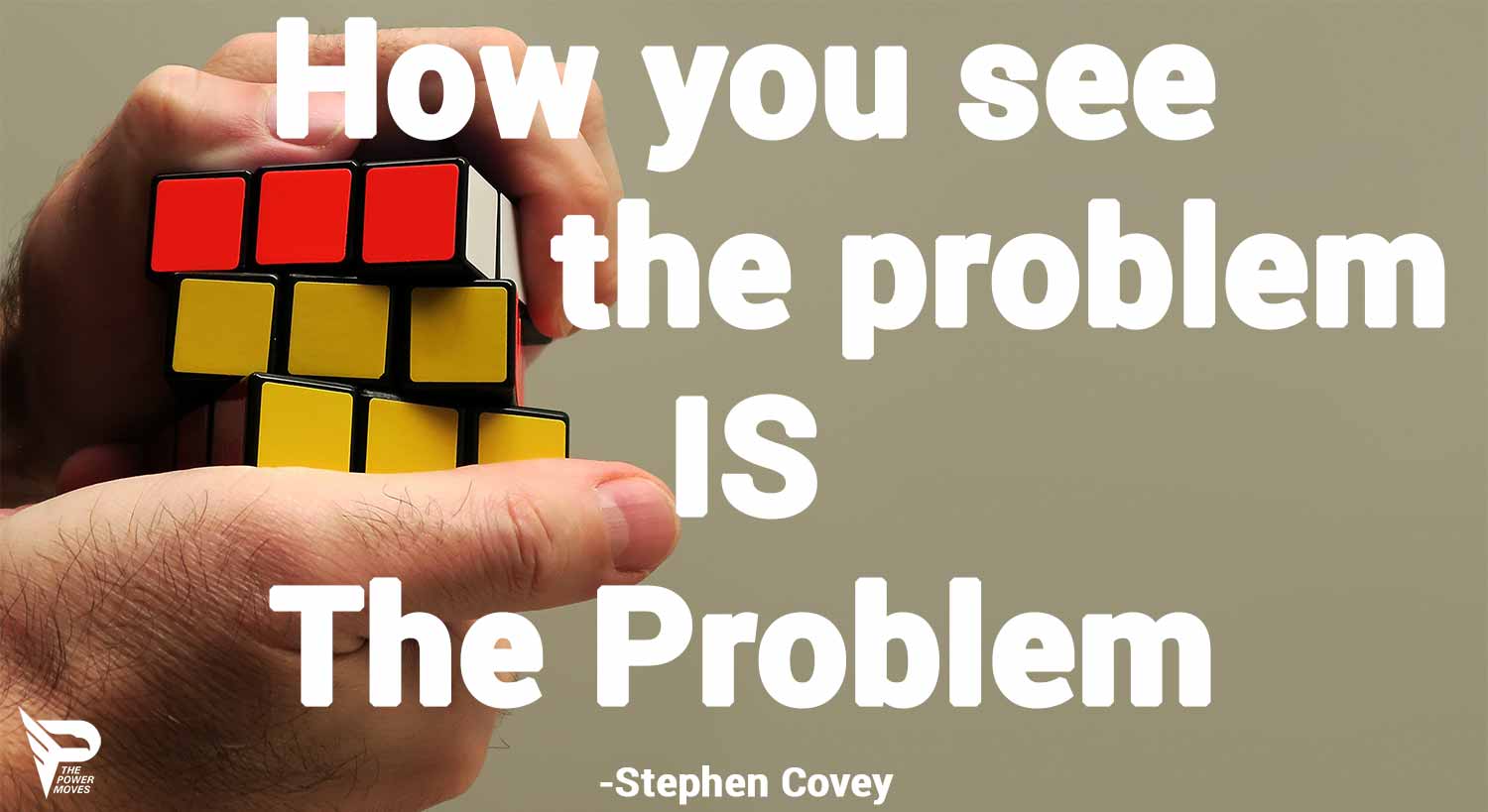 Part I: Paradigm and Principles

They see a big success and want to know how he did it, believing (and hoping) they can do the same following a quick bullet list.

But real change, the author says, comes not from the outside in, but from the inside out. And the most fundamental way of changing yourself is through a paradigm shift.

That paradigm shift is a new way of looking at the world.
“The 7 Habits of Highly Effective People” presents an approach to effectiveness based on character and principles.

Habits 4, 5 and 6 are about people and relationships. The will move you  from independence to interdependence. Such as, learning to cooperate to achieve more than you could have by yourself.

You Create Your Reality: You’re In Charge

Proactive is not what most people would think it is.

For Covey being proactive means exercising your power of choice between the stimulus you receive from the world and your response.
If you feel down, it’s because you allowed the stimulus to bring you down.

The author quotes Viktor Frankl, author of Man’s Search for Meaning, when he says:

Between stimulus and response there is a space. In that space is our power to choose our response. In our response lies our growth and our freedom

This is also a major stoic philosophy pillar which Ryan Holiday also renders in his fantastic The Obstacle is The Way.

Focus On What You Can Control

Covey introduces the “circle of control” to represent all that we care about.

We can only influence a portion of what we care about, and that’s where we should be focusing on.

Focusing on anything else means focusing on what the author calls “the circle of concerns”.
Focusing on what we cannot control is a waste of time and energy. And often also spoils our mood because it takes the form of worrying and complaining.

Ironically, the more you focus on the things you can control, the more your abilities and skills improve. Which in turn will further enlarge your circle of influence.

To start mentally shifting your focus into the circle of influence the author suggests you stop using “if” sentences such as “if only I had…” and start using instead “be” sentences, such as “I can be more..”

Habit 2: Begin with the End in Mind

Beginning with the end in mind means being clear about who you want to be and where you want to go.

And then travel that path.

However, it runs deeper than Robert Greene’s “plan all the way to the end” as described in “The 48 Laws of Power“.

Covey says that if you are not clear about the mental creation of where you want to be you are the mercy of randomness and circumstances.

Covey recommends that as much as you think about your life goals, you also think about who you want to be.

When you have that clear, you can draft principles and values in accordance to that person (check Principles to see Ray Dalio’s).

With your principles and values clear you will approach life and all the events in your life with a high level of clarity and confidence.

To make sure your life goals and personal principles are aligned Covey recommends you write a personal mission statement.

The mission statement should answer the questions “who do you want to be and what you do want to accomplish”.

This chapter reminded me of the auto suggestion chapter in Think and Grow Rich, but better and without woo-woo.

What do you want to be when you grow up?
Decide and then become it.

Habit three is all about prioritization.

If you follow the steps of Habit 1 and 2 then you have your values and life goal very clear.
This means you know what are your priorities.. And which are not.

Basically, your first and major prioritization is through the filter of your life goals.

Once you have a burning desire to become and do what you want your yeses will also clearly show what are your nos. That’s the bedrock of prioritization.

To effectively manage your time you should spend most of your time on non urgent and important tasks.

This way you will rarely have to deal with urgent and important tasks, which heighten your stress and often deliver sub-bar results. 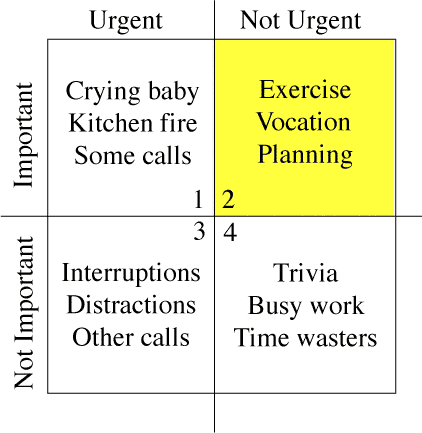 Covey says that win/win is a character based approach to human interactions.

To achieve this level, you must first acquire three essential character traits:

I particularly liked that the author stresses the importance of integrity in the sense of aligning yourself with your public actions.
Read here how to acquire framework self esteem based on your identity.

The author says most people think in terms of either/or: it’s either you’re nice (and a push over) or you’re tough (and get you own way).
This is what Brene Brown calls Viking or Victim mentality in Daring Greatly.
Maturity instead is that happy balance in between.
It requires you to be empathic and confident, considerate and brave, all at the same time.

Covey talks about human relationships in terms of emotional and human balance.

He says when you approach life with a win / win mindset, you always treat people well and you make deposits in your emotional bank.

If one day something goes wrong and you need a withdrawal, you can count on years of systematical balance surpluses.
And people will be happy to help you.

This theory reflects the view of social interactions as exchanges, with which I agree with (check my article for more).

These are all subpar approaches:

Habit 5: Seek First to Understand, Then to Be Understood

Covey says that communication is the most important skill in life.

And we are all heavily under-trained in listening. Indeed, very few people even listen at all.
Which is a pity, because the foundation of influencing people is to first understanding people.

If you need some help, check out the best communication skills books.

Covey says there are four levels of listening:

Empathic listening removes your own frame of reference as much as possible.
It looks at their body language, the tone of voice and nonverbal gestures.

Ultimately empathic listening means putting yourself in their shoes feeling what they’re feeling.

This is key because before people can move to solutions they need to feel you understand them.

To be understood the author advises not to start and communicate with just logic but to explain where you’re coming from emotionally as well.

My Note:
I agree. Trying to completely take emotions away might seem “stronger” but ultimately destroys relationships (see the emotionally unavailable men article).

Further reading
Dale Carnegie proposes the same approach in How To Win Friends and Influence People. And if you want to read practical applications in conversations I recommend the books Crucial Conversations and Difficult Conversations.
Or check all my summaries on communication.

A Team is Stronger Than an Individual

The idea of synergizing is that the whole of a well functioning team is greater than the mere sum of its part.

The key to an effective group synergy, says the author, is to really value the differences among us.
So ask yourself: do you want to be right, do you want everyone to agree?
Learn to embrace differences as a strength instead.

Synergy also entails “flow” and perfect group automation as if the group was functioning as one. That’s when you achieve top results.

Take Care of Your Greatest Asset: Yourself

No habits in the world will take you far unless you preserve, take care and keep improving on yourself.

Covey recommends you focus on the four major dimensions of your life:

He says it’s important you commit some time for each one dimension. And he’s right.

Remember You Have The Ultimate Trump Card
Nobody can make you feel bad if you don’t allow them. Your mind is yours, you wield the ultimate power.

Build Your Future (You)
Think about the (wo)man you want to be and what you want to have. And then forge your path to get there. On the way, keep your eyes on the ball. Meaning:

Prioritize What Matters To You
Do and spend time on the things you care for and that will lead you to where you want to be. Don’t allow circumstances to sidetrack you.

Some Key Mindsets Missing
The 7 Habits of Highly Successful People is so successful that I’m afraid some people might not read anything else.

And in all its greatness, it’s also missing a few key mindsets for self-development. A growth mindset, for example, is a key element missing (check here how to develop a growth mindset)

“The 7 Habits of Highly Successful People” is a fantastic book.

I might even go as far saying that it’s a must-read.

The last thing I’d like you to notice is that Stephen Covey says even today, more than a decade after he wrote the book, still struggles with the principles.
It’s a constant practice, he says.
The better you get, the more you realize you can do even better.

So start today:
Get The 7 Habits on Amazon