Charismatic people are natural leaders who can easily gather a following of ardent supporters and followers.

Being able to switch on charisma at will is a wonderful skill that will make you more powerful, more liked and more of a leader.

Charisma is a presence that excites us.

It’s that looking up to the them that gives charismatic men a strong social power.

Should You Try to Be Charismatic?

Most people would gain from learning to be more charismatic.

So let’s see how to do just that.

How to Be Charismatic

Here are 11 steps to be more charismatic:

Have something you believe in.

A goal you’re moving towards, a vision you believe in, a change you want to see in the world.

This is a world of lost souls looking for a master. And when you know where you’re going people will instinctively want to follow you.

Even if you’re not yet clear about the steps, the vision and drive are the most important aspects.
Where you’re going matter less than having a strong cause, an ideal or a vision you communicate passionately about.

Just look at Greta Thumberg.
She knows sh*t about climate change, but she communicates with purpose and passion and the sheep follow her. 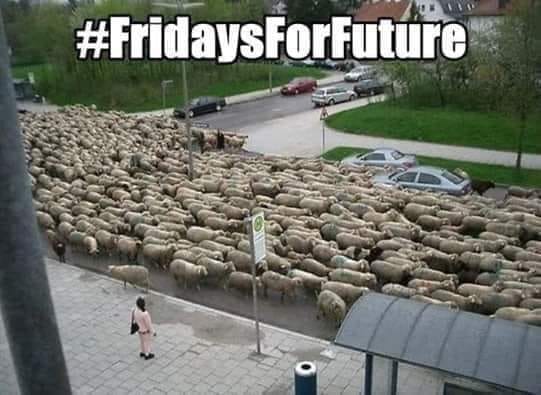 Most people pay lip service to their values.

And that’s a great opportunity for those who actually walk the talk.
The few who actually honor their values no matter what impose their bigger than life presence on the massess of hot hair producers.

And we look up to them.

By putting values and tradition above the baseness of money, The Godfather shows the trait of charismatic saintliness.

Most people compromise, change their mind, say one thing and do another, show a face in public and another in private.

It’s part of life, part of keeping an even keel and staying afloat. We come to accept it as simply how it is.

But deep down we admire the people who go on the extreme -and stay there no matter what-. They have guts, we think.
And especially in times of uncertainty and turmoil extremists  gather a strong crowd of followers. 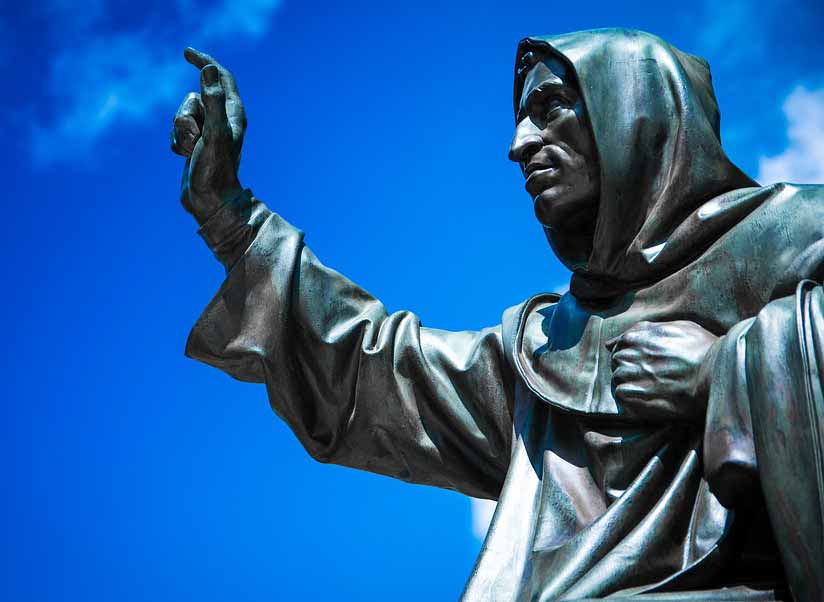 Girolamo Savonarola, in the picture, was a dangerously charismatic extremist.
With religious fervor and uncompromising puritanical zeal he set out to undo years of enlightenment in the world capital of enlightenment: Florence.
And with the zealot that only the most charismatic men can muster, he gathered a crowd of puritanic idiots to help in the dirty job.

He lacked the strategic oversight to understand when to stop and eventually was executed. But he did manage to stir much discontent and to burn and destroy much art before it came his turn to burn (dark pun).

Charismatic leaders are masters in using the demonic power of words to elevate, incite, stir anger or to simply beat their opponents into (verbal) submission.

A good  example of eloquence in the service of charisma is Jordan Peterson, author of The 12 Rules of Life:

Jordan Peterson gathered a huge following becuase he speaks well, with passion, and looks like he breathes lives into his deep well of knowledge.

Eloquence is nice, but by itself, it’s just words.

Eloquence by itself makes you an academic. But eloquence with passion, purpose and direction, now that makes you a charismatic leader instead.

This is an example of impassioned speech from the movie Braveheart:

Many charismatic men have led other gullible men to their own death.

Most people are constantly in doubt.

Not the charismatic.
The charismatic has an air of eternal confidence and certitude.
And it’s frankly difficult not to be swept away by the mixture of passion and conviction of some of the most charismatic men in history.

Sometimes they appeal to nothing concrete.
They call up in arms for honor, “empires”, values… And even peace (!). But they say it so convincingly passionately that, deep down, we all admire them and want to be on their side.

Benito Mussolini: The keyword is one and one only. Winning. And we will win.

Here’s another great quote from Marshall McLuhan that perfectly sums up the convinced charismatic man:

I may be wrong, but I’m never in doubt.

Reverse of The Law:

Some charismatic people will speak with conviction even when they have no idea what they’re talking about.

However, that cannot last long.
If people get to know you well and you keep talking nonsense, your charisma will quickly fade over time.

Pavid, fearful men are not charismatic.

Just think about it:

Would you admire and follow anyone if they withdrew when they’re needed the most?

Probably not, because we want our leader to show strength when strength is needed.
When the chips must fall on the table, you must show your strength and resolve to make things happen.

People admire and follow those who are in charge. And as Machiavelli said, being feared is better than being loved. Which is especially true in moments of crisis.

Ben Affleck is not afraid of laying down the law in Boiler Room:

A step above and beyond muscular leadership is showing fearlessness in the face of danger.

Al Pacino in Scarface can be a good example of fearlessness.

We all fall conventions, afraid of being judged and ridiculed.

Not the most charismatic men among us.
They are who they are and go for what they want without caring about what everyone else thinks.
And that’s supremely attractive.

We all put on a mask in public.
We try to hide our emotions, to show ourselves stronger, smarter and better than we really think we are.
So when someone can show himself (figuratively) naked in front of an audience it impresses us all.

Dropping the mask can be a sign of strength, and it’s also a sign that we are possibly more emotional than rational.
And again, it’s emotions that appeal us the strongest.

Vulnerability also includes admitting and fessing up to your shortcomings without fears.
Look at Bush doing it here:

Instead of listening, pretending of knowing or agreeing, Bush admits he doesn’t know.
And implies he doesn’t care.
He’s got other priorities, we imagine, and couldn’t care less about the German healthcare system.
Very charismatic in a slightly asshol-ish way.

Reversal of The Law

Vulnerability in showing anger and emotions, especially for past events, is OK if you frame it as your driving force.
But vulnerability as a show of weakness is a no-no.
Also read “vulnerability is not power“.

Some of the most charismatic characters show a daredevil side, a rebellious streak.

They live life their own way, sometimes even going against the grain of society.

That’s exactly what makes Han Solo, a Stars Wars character, the most likable and charismatic man in the trilogy:

Never tell me the odds

LOL, so typical Hollywood :). But it shows the adventurous spirit combating against “the timid bore of numbers and rationality”.

History is peppered of charismatic men.

Most dictators are charismatic men. They often take the helm of nations by riding the waves of discontent, rebellion or strong emotions.

They sometimes make up enemies so they can whip the crowd into a frenzy by pointing their fingers at something else.
They will ride that growing wave and as everyone is taken over by emotions, very few will realize how poorly equipped they are to actually lead a country.
For Hitler the enemies were Jews, for Lenin it was the rich capitalists oppressing the poor.
Let’s hope we’ll all be smart enough to recognize the next dangerous charismatic man before it’s too late…

Some other examples of charismatic during histories:

Charisma can turn on you.

Robert Greene in The Art of Seduction uses the chilling example of Robespierre’s own death as an example of the dangers of extreme charisma in the political arena.

Robespierre rode a wave of highly emotional rebellion that turned nasty with the reign of terror.
Eventually, Robespierre kept the heat of the terror on for way too long when the population wanted to go back to normal life. And in a few months he went from revered charismatic leader to everyone turning against him.

Charisma is indeed as volatile as the emotions it creates, says Greene.
The charismatic man often wins love and support by barging into a difficult situation as the savior. He provides a strong guidance and helps everyone right through the turmoil.

But once the people start feeling more secure or feel the times are changing, charisma is less needed and the charismatic man a thing of the past.
Some charismatic will try to keep the flames of danger and risk ablaze just to stay in power. Or because they don’t know any better or what else they can do.
But people will tire of it and at the first sign of weakness will turn on you.

Robert Greene says you should then turn the heat lower when the adventure is over and slowly settle into a more boring routine.
People will admire your self-control and adaptability if done correctly.

The alternative is having an army to prop yourself in power, which you will need as charismatics tend to make quite a few enemies.

Once the dust settles charismatic leaders and rulers tend to leave a mess behind with their wild personalities.

The one who follows after a charismatic is left with a big clean up to do. Most people fail to understand how the mess was created in the first place though.
They miss the charismatic leader and blame the successor for the problems.

To avoid this situation Robert Greene suggests instead going in a completely new direction.
In the 48 Laws of Power he explains how Truman escaped that way the charismatic curse of Theodore Roosevelt.

While to be charming it’s imperative that you are socially skilled, people’s skills is not a necessary requirement to be charismatic.

Indeed a charismatic man might also draw more power from being asocial. That communicates that you are all too consumed about your art, passion or mission to even care about people.

However, social skills and understanding of social dynamic is what would ultimately allow you to stay in power (or to stay popular).

If Robespierre and Rasputin had been more socially skilled for example they would have seen the writing on the wall and adapted their strategies.
But they were too self-absorbed and socially unaware to notice…

Charismatic leaders tend to hog all the power.

Haslam in the seminal book “The New Psychology of Leadership” says that:

People are so looking for a figure who projects an aura of certainty in uncertain times that we even help would-be leaders to convince us that yes, they are the answer to all our problems.

Lipman-Blumen says that, in the process, we even push charismatic leaders to believe in their own infallibility.
Until, eventually, reality catches up with us all.

But by then, lots of damage might have been done…

Charisma Is NOT Loudness

Finally, there is a lot of misunderstanding about charisma.

To better understand the difference, check out the Charisma University review and the course “Social Power” on this website.

People look up to them because they possess strong qualities and convictions that they wished they had themselves.

In this article, we saw the traits of charisma, the dangers of charisma and how to be charismatic without any downside. 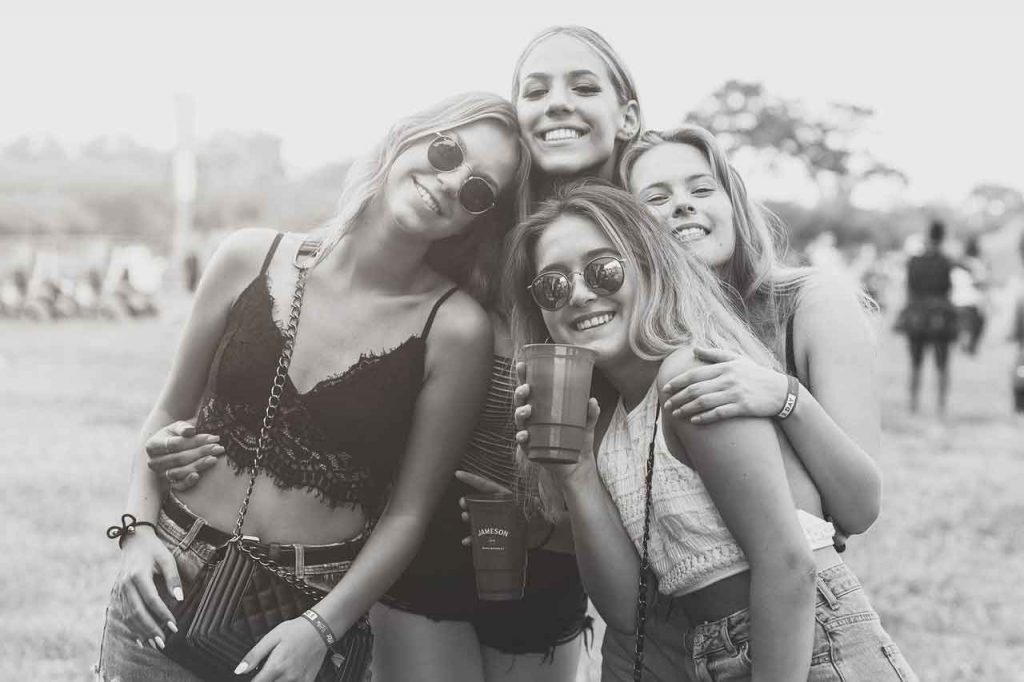 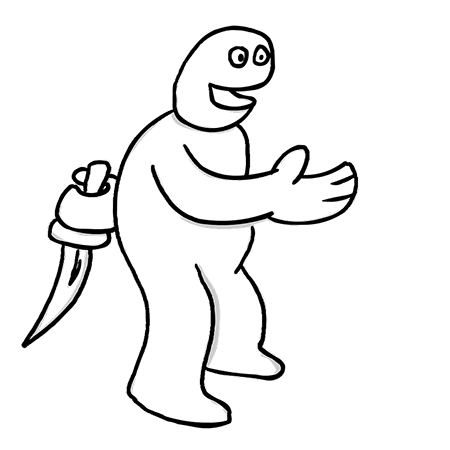 How to thank people properlyby Transitioned2 mins ago