This is a review of Charisma University.

About the Author: Charlie Houpert is the founder of the YouTube channel Charisma on Command and he has already written a book on charisma called, guess how, Charisma on Command. Charlie doesn’t expressly say it, but by reading his book and taking the CU course, he majored in philosophy and it seems like he started off dabbling as a dating coach.

Charlie says he went from introvert to charismatic extroverted.

That might be. But I’m not convinced that’s the case. Going from introvert to extrovert is rare -and we might argue if that’s even something an introvert would want to do-.
Maybe he was a shy extrovert, an ambivert or he simply grew into his own with time and effort.

Introversion is a relevant subject when discussing Charisma University and Charlie’s approach as we will see because what he recommends is the extrovert way of socialization -the far end of extroversion-. 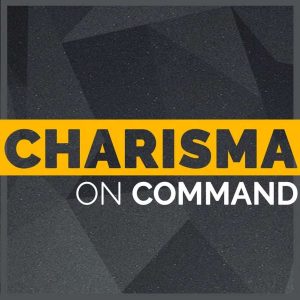 The first rule of first impressions is to not try to impress.

Charlie says you must hit 4 key emotions to make a great first impression:

My Note: Good points, not sure about the order
Charlie says you must hit them in the order or you’re in trouble. I like the idea of forming a strong “social foundation” before you show interest. Early interest might otherwise seem phony or might even be unwanted.

However, I am not a big fan of segmenting socialization into pre-defined “steps” that one must hit for success -it reminds me of The Mystery Method in seduction-.
Reality is complex and all components co-exist and overlap. Beginners who try to focus on the steps to hit one after the other might get stuck in their own head and end up being even more confused.

I love the format of showing examples. That’s what helps people understand the abstract concepts and bridge the gap from theory to real-life practice.

However, frankly, I really didn’t like the examples of first impressions in Charisma University.
Here they are:

This should be the example of a charismatic way of dealing with people:

To me this not an example of a gregarious or charismatic man.
Obama comes across as haughty, distant and rude. His “touches” are way too aggressive.
If he had done that to me, I would have been annoyed and would have pushed back to enforce my boundaries.

Charlie makes the point in Charisma University that revealing a weakness early makes you likable and charismatic.

There is indeed power in vulnerability. Both in connecting with people and in showing emotional strength (also read: Mask of Masculinity and Braving The Wilderness & The Gifts of Imperfection).

However, vulnerability expressed too early in an interaction can easily come across as out of place, insecure and socially awkward.
Yes, it can give you some brownie points in making you more likable and relatable if you are very high value. But that’s hardly more charismatic and definitely not powerful.

Also read: vulnerability is NOT power.

Charlie Houpert takes a book out of Tony Robbin’s book, rather literally, Awaken The Giant Within and duly gives proper credit.

The exercise for confidence is as follows:

Overall, I’m not a big fan of this type of situation, high energy “confidence” and I believe that real, long term confidence can only be achieved with an antifragile ego -also check Ultimate Power-.

But it was a good module and I really loved the example of the student who stopped all his classmates from cheating.

I also liked Charlie Houpert’s analysis of verbal expressions and body language mismatch.
For example, if you approach someone fully frontal, you must say introduce yourself directly or cut to the chase about what you want, else you look incongruent.

Again I have to disagree with what Charlie presents as “charismatic”.

Here is the Will Smith example:

This might be funny in a sort of “over the top way”, but I must wonder if this is charismatic.
And, unless you’re going for a jester style of social dominance, this is far from powerful.

Chris Rock is another example of great conversations in Charisma University.

Charlie recommends you laugh at your own jokes, and albeit that has a place in very high energy situations, I don’t recommend you always do so because it can make you come across as insecure.

Charisma University’s module on storytelling was by far my favorite.

Storytelling is one of my weaknesses and I learned a lot here.

The mindset of telling a story, says Charlie Houpert, is not to go from A to Z, but to adjust along the way depending on the attention you get and what the audience likes.

Here are some good advice on telling a powerful riveting story:

Charlie also differentiates between three different types of stories: the fun stories, the tragic stories, and the stories about yourself.

The tragic stories are slower and have lots of pauses to let the emotions sink in.
The happy and fun stories are fast-paced and punctuated by laughter and different and rising voice tonalities.

Stories about yourself serve the purpose of giving you credibility or of making the audience like you and respect you.

He stresses the importance of posture -his tip: imagine a hook pulling you up- and voice -he has one single voice exercise but I loved it-.

Once again, I was not convinced by Charlie’s Example of magnetic presence.

Which makes sense, because Charlie’s examples are mostly of “over the top” personalities and I don’t believe that’s the only way -or the best way- of being charismatic -or socially powerful-.

Just see the example of magnetic presence in “Charisma University” for yourself and you’ll immediately understand what I mean:

To be fair, Charlie Houpert does say that you can be magnetic with lower energy.
But most of his examples still end up being almost all high energy. He even mentions that Marlon Brando magnetic low energy charisma works only because it’s scripted.

With that, I must disagree.
Also see:

This is the module I probably enjoyed the least.

Leadership is mostly one type of leadership: inspirational leadership.
And the rest is about how to better understand people which is basically a summary of Tony Robbins’ Creating Lasting Change.

Also, I loved Tony Robbins’ approach to analyzing and understanding people based on the six human needs.
But, as per all other systems designed to reduce the complexity of reality, it can end up being a generalization unless you are aware of the limitations.

Just to give you an example:

I enjoyed Charisma University, but it has some cons for how I see social skills:

As Olivia Fox Cabane, author of The Charisma Myth says, there are many different ways of being charismatic.

Yet, Charlie seems to present one only way of being charismatic: loud, extroverted, and high energy.

Some video examples and breakdowns were from rather low-quality videos.

As a guy who constantly struggles to find high-quality videos to use as examples, I know how hard it can be.

Yet, in a 600 USD course, I would have expected fewer low-quality examples.

Charlie touches upon some of the basics of posture, voice, and clothing.

And of course, Charisma University is not meant to provide in-depth information on those topics. Yet, given how important they are, I think they deserved more space than what they actually got.
After all, that’s what often makes the biggest difference for beginners: the fundamentals.

Here are the pros of Charisma University:

Charisma university has lots of real-life examples and good breakdowns. Just as I like it.

The course provides a good crash course overview of social skills, especially for those who have a style similar to Charlie Houpert (or want to have a similar style).

Charlie could be dubbed the “explanator in command”. He has a knack for taking abstract thoughts and communicating them clearly for everyone to understand.
Personally, even more, the already good course content, I learned the most from his way of speaking.

I absolutely loved the format of mixing own videos with examples.

It’s similar to what I was aiming for my course Power University -in the end I went for a mix of written words, own videos, video examples, pictures and quizzes-.

I also enjoyed Charisma University’s content, it’s very good for the basics and I loved the module on storytelling. Charlie is also a master public speaker, and you can learn from Charlie himself as much as from his own examples.
Maybe it’s time someone makes a YouTube breakdown on “how to be charismatic like Charlie Houpert” :).

On the con side, I didn’t like the overarching theme that to be charismatic and successful with people you have to be high energy.

In my opinion, Charisma University is a great fit for more extroverted people. Or for people who want to acquire a more lively, “bouncing off the wall” type of personality.

Still, introverts can learn the extrovert style -and they probably should!-.
Sometimes in life it just pays to be more extroverted and higher energy. And the more tools you got in your toolset, the better off you are.
However, I don’t think these people should try to change their nature to become what they’re not, because they can find social success within their own styles (plus, going against one’s own nature requires lots of effort for uncertain results).

This is something that different personality types who go through Charisma University should keep in mind: you don’t have to become like Charlie, or like his examples, to be successful.
Introverts, highly sensitive, charming, seductive, quieter, or slow-moving individuals all can find their own strengths they can leverage.
As a matter of fact, I believe there is often more power in being silent and moving slower, than in being high-energy.
It’s not about changing their nature, but finding the strengths in the style that more closely match their nature. See for example the 7 archetypes of dominance, and you will see one can be dominant in totally different ways.

Of course Charisma University is legit.

And, of course, whether or you’ll become charismatic right after you go through it

And the answer to the latter is “no, you will not”.
And it’s the same for any course.
You won’t come out of my course and be a master of dating, power dynamics, and office politics as soon as you’re done.

But, a good course can give you the knowledge and theoretical foundation.
And gives you advice on what to work on.
That’s a lot, actually. The rest though is up to you.

And when it comes to that theoretical foundation, I would give to the content of Charisma University a 4-star rating.
It’s a high rating for a critical reviewer as I am.

But everything is subjective.
For people who are struggling with social skills, Charisma University’s content is worth 5 stars and more.

And finally, for me personally, as a more advanced student of human nature, I was seeking and expecting a bit more refinement and depth, and that takes it to 3 stars.

Is Charisma University Worth It?

And now the big question: is Charisma University worth it?

I find this question spurious: it depends heavily on your current social skills, social intelligence, and your financial situation.

A millionaire with low emotional intelligence, probably yes.
A guy who’s already been into self-development for a while, with an average income, relatively good social skills, and who doesn’t like the “over the top style”… You will have to answer for yourself.