Winning debates is an immensely helpful skill to have in life.

Especially if you’re planning to get into politics (or academia).

And this article is going to show you how to win a debate… Exactly when winning a debate seems impossible.

How to Win The Toughest Debate

Trumped headed into the second debate that the wheels were coming off of his political campaign.

He faced sexual assault allegation and one of the biggest uproars a candidate president has ever seen.

Yet, that wasn’t a huge change for Trump.
He always painted himself as an outsider and he always played by his own rules.
“His own rules”, of course, often meant “outside of the rules.

Trump indeed uses a lot of debate tactics and techniques that could be defined as “unfair”.
And this post will show you what those unfair techniques are.

#1. Strategic Agreement: Take Their Game Away

Let Them Charge You… Then Simply Sidestep

Sometimes a politician will derive most of his power not from his own values and personality, but by positioning themselves against you.

When that’s the case, you have two options:

When you can show you are the opposite of what they are trying to depict you, they will look silly for attacking a straw man (Straw Man argument fallacy).

And for trying to push an agenda that you are showing not to be true -with facts-, they are basically spending marketing money to look insincere and harm themselves.

Trump called Clinton “crooked Hillary”, and Hillary tried to do the same by making “dark Trump” stick.
While Clinton tried to frame Trump as dark and divisive she positioned her whole campaign as standing for the opposite of what Trump (supposedly) stood for.

Of course, as soon as the primaries were over, Trump went into overdrive to change that narrative and did so effectively: “dark Trump” never stuck.

This technique is especially effective during campaigns.

How you can use it to win a debate?

The most effective way of using this technique during a debate is right after they have launched a big tirade against you.
Or right after they pitched themselves as being the exact opposite of what you (supposedly) stand for.

In the second presidential debate, Hillary is smart enough not to verbalize that her position is against Trump, but it’s pretty obvious to almost everyone.
Hillary talks about “being great” -VS “make America great again”- of “being good” -as opposed to “we are doing terrible” and “togetherness” -as opposed to Trump’s alleged divisiveness-.

And what does Trump do?

He takes the stage and agrees with everything she said!

When Trump takes the stage and he just agrees with Hillary, he neutralizes her whole (indirect) attacked, makes her look terribly silly… and he makes himself more palatable to large swathes of moderates.

#2. Fight Fire With Fire: Blame Them of Your Weaknesses

Show Chinks in Their Armor And Nobody Will Notice Yours

It can sound silly when it’s done without any supporting argument but add just a little bit of meat around it, minimize your faults while you exaggerate your opponent’s faults… And you got an extremely effective weapon to win the argument.

When Trump was accused of sexual assault for his leaked videos talking about “grabbing women’s pu**y”, he resorted to this technique.

He said his were just words, but Bill Clinton has actually assaulted women with facts.
And Hillary Clinton has defended rapists and laughed about the victims.

Notice the difference: mine was just locker room talk. They did facts and Clinton even laughed about defending rapists.

Trump even brought those women on stage.
And since Hillary didn’t defend from Trump’s accusations, it always remained a lingering doubt in the audience.

This was a very well structured form of “you are, no you are” game and effectively helped Trump to climb out of the huge hole that the sex assault tape had relegated him in.

When All Expect Surrender: Charge

Trump’s whole campaign seemed to be on the verge of disbanding and coming undone.

When you face a similar situation, approaching the situation meekly or with the common “defend and attack” wouldn’t be enough.

You need something bigger.
You need to where nobody else would dare to go.

Trump needed something huge as well to even the scores.
The 48 Laws of Power suggest to enter action with boldness, and that’s exactly what Trump needed.

But he didn’t stop.

He then moves on to the email controversy saying that “lives have been ruined for doing a fifth of what she’s done“.
Trump took a small issue on Hillary’s side and effectively managed to make it seem like a huge scandal.

And it eventually culminates with his (in)famous retort:

Because you would be in jail

We have a strong tendency of sympathizing with people whom we feel are being unjustly oppressed.

If deployed when there’s no objective oppression it looks lame, pathetic and you look like you’re making excuses. But when you can spin it well, it works wonders.

In the presidential debate, the female moderator did seem slightly against Trump, or at least she was at times rather aggressive towards him, which helped Trump hugely in framing himself as the victim and the moderator as a Clinton supporter.

#5. Show They Are Cheap: Then Be Generous

Your Generosity Pays Double When Your Opponent is Cheap

When that happens, the party who is able to show the observers that he can preserve a positive and welcoming attitude no matter what stands to gain big time.

Trump does it masterfully.

It’s challenging to be the first one to offer the olive branch.
It’s challenging because it’s difficult to quickly change your state and there’s always the risk the other party might NOT reciprocate and use your opening to attack you instead.

Also the first party is more likely to only take a half step towards you rather than a full step.
And therein lies Trump’s Power Move in letting Hillary go first -whether that was intentional or not, we don’t know-.

When Hillary goes first her “compliment” looks stilted and avoidant.

That’s great for Trump: the lady who presented herself as the party for unity and the president for everyone was unable to negotiate peace.

She couldn’t even deliver an honest compliment!

Trump takes the stage, looks like a real family man, a proud father and deliver a sincere and honest compliment to Hillary. Huge point for Trump.

When Neutrals Side With You, You Must be Right

When you’re in a debate there’s a tendency for people to take sides.

Having people in your side support you is great, but it’s also expected: They’re on your side after all.

But when you can get obviously neutral people to support your cause, that’s when you really score big.

In the case of a debate you will rarely get neutral people openly supporting your view.
But you don’t need open support.
You all need to make it look like they are supporting you (Obama takes full advantage of that as well here).

When the moderator asks Hillary about her “too cozy for comfort” relationship with big banks, Trump says “thank you”.

That “thank you” draws attention to the question, which is a great way of pre-suading by drawing attention to it (Pre-Suasion, Cialdini).
And it makes it sound as if the moderator is now supporting Trump’s cause.

The moderator slight laughter also supports that view and Hillary’s big smile -as if she had just been found out- also help Trump in framing Clinton as the defender of big corporations’ interests.

And Make Them Look Sneaky

All politicians use very common and standard techniques such as:

Trump does it almost always, while Clinton does it most of the times (but a few notable times she didn’t and left her side open to counter-attacks: watch an example here).

This a rather standard procedure in political debates.

However, when your opponent is deflecting a major question or when he didn’t defend properly, here’s a simple technique to bring the spotlights back where you want them: explain to everyone the technique they have just used.

It will give you double the points as it will look like your opponent is using unfair debate techniques to get off the thorny issues.

Watch Trump execute it to perfection and get a major cheer out of it (this is right after the “thank you” move) :

8. Let Others Come To You

And If There Are Any Doubts To Who’s The Winner, Just LOOK Like The Winner

When there’s an audience watching you don’t win the debate only during the debate.

Everything you do before and after are all part of your show.

At the end of the debate, Hillary is the first to move.
She tries to show herself as social and friendly, but  she overdoes it and looks a bit like an over-excited schoolgirl meeting the family after her first class.

Trump instead moves slow -we’ve already spoken about the connection between slow movements and dominance– and, importantly, STAYS on the stage.

Clinton looks like the typical politician shaking hands, taking pictures and giving away fake smiles -and this is a period people are a bit tired of politicians-.
Trump instead looks like the man at the center of the attention, he keeps getting all the limelight he can and lets others come to him.

If their friends don’t like them then… Who would?

A common strategy to accrue social power and win debates is to appear like you have a lot of support from famous people and people who command a certain respect.

Trump used it more than anyone I remember seeing, and often in a very hyperbolic fashion.

But when Hillary used it against him to increase her support, what does he do?
He attacks and undermines that same social proof.

When Hillary mentions Sanders, Trump reminds everyone how Sanders said Hillary is a crooked politician.

And when Hillary mentions “my friend Michelle Obama“, Trump says it’s no friendship and reminds us all how Michelle wasn’t really very amiable towards Hillary in the past.

Most people are likely to remember both Sanders’ comments and Michelle Obama ads, so Hillary now looks like a chess-playing politician with no real friendships.
Such as, a fake person, which is one of the biggest issues Hillary had to contend with during her campaign.

If you’re here looking on how to win a debate I’d like to point out that some tips here are not always generalizable.

You will indeed not always be in a situation where you need to attack like a rabid dog.
And when not strictly needed it’s an attitude that can backfire.

However, a few of the other tactics like Strategic Agreement and Recruiting Neutrals will serve you well in any situation.

Make sure to check out How to Win a Debate (Part I) and Ben Shapiro bullying debate techniques for more. 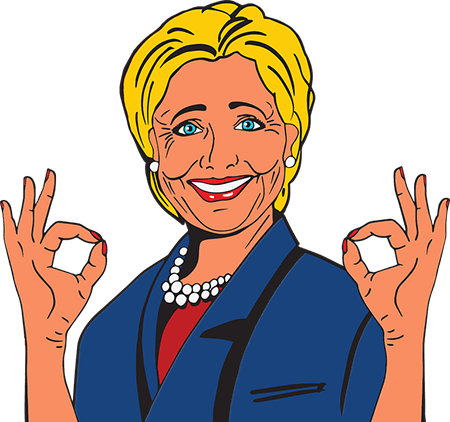 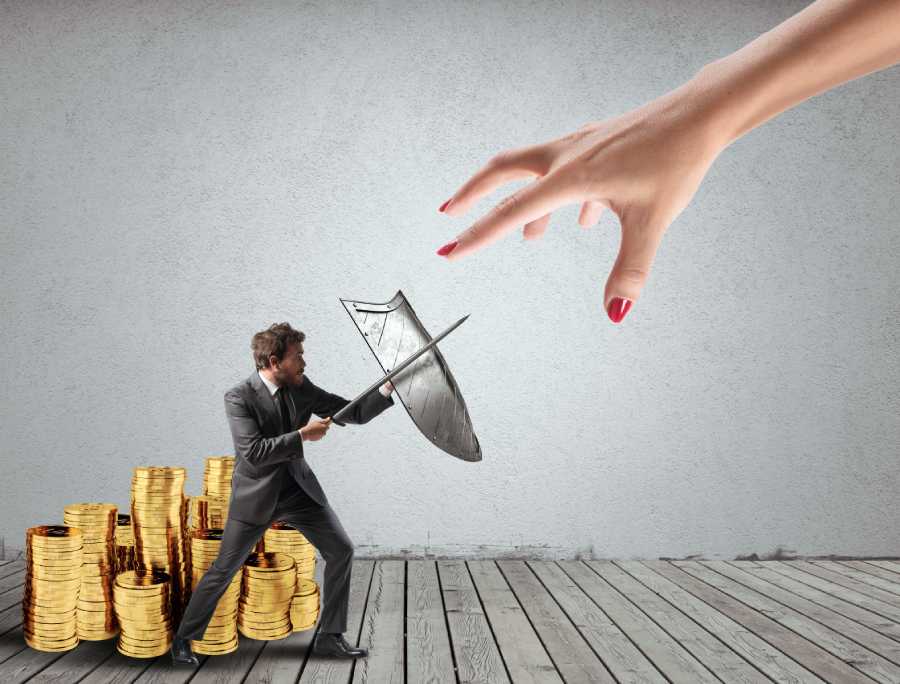