The No Asshole Rule
Robert I. Sutton
Business & Economics
Business Plus
February 22, 2007
224

The No Asshole Rule analyzes the impact of assholes on the workplace. Robert Sutton says that while it can provide short term benefits for the assholes, it’s highly poisonous and companies should never tolerate assholes.

Robert Sutton that we are all assholes sometimes, and in certain periods of our life.
However the certified asshole is the one who constantly bullies or puts others down, and leave their victims angry, humiliated or afraid.

Since their behavior is continuous, their effect is also cumulative, and even low reactive people can start feeling their bite after a while.

You can spot an asshole from the presence of these daily behaviors:

However, the main rule of thumb is this: how do you feel after the encounter? Do you feel oppressed, humiliated or overall worst off?

Lick Up, Kick Down

Assholes Are Bad for Business

Assholes lower the morale of the organization and lead to disengagement in the environment where they are left free to act.

It has huge on the organization as people are more likely to quit, take days off, talk behind people’s back and even steal.

When assholes get in positions of power their ability to devastate the work environment increases.

Some businesses and organizations tolerate assholes in the name of their apparent bottom line impact or their talent and skills which makes them difficult to replace.

Sutton however says that in the long run it’s always damaging for the company to put up with assholes’ antics.
He says that anyone who cannot get along respectfully with the people around should be considered incompetent no matter their amount of skills or talent.

And the company culture should be clear that all employees deserve to be treated with fairness and respect.

The pay off for the business is higher loyalty and employee morale.

Sutton says that the rule of thumb is: the greater the status difference between managers and employees, the more the bosses tend to disrespect lower-ranking employees.

Thus, to reduce and discourage assholing behavior business would do well to reduce the status differentials and to flatten the organization, potentially also decreasing the pay difference between employees.

The author says that aggressive and threatening behavior do can provide some benefits in the business world. A bit the same way it would work in wild animals or in a mafia organization (read domination signs of The Godfather).
Sutton says this happens because our brains associate aggression with high status.

However, this doesn’t mean that an organization should promote assholes or that asshole behavior is good. Indeed, behavior that can help win over a rival manager or team seldom translates for advantages to the whole organization (also read Snakes in Suits).

Furthermore, assholes are more likely to drive away the very best of the employees, those with options and greater skills.
This ensures that the organization bleeds talent and turns into a toxic, talent-poor environment.

Founders and upper management can also help by fostering a culture that restrains internal competition and fosters cooperation.

Subtler approaches also include replacing aggressive and warlike words and phrases such as “enemy”, “battleground”, “trenches” and similar.
Using pronouns such as “we”, “us” and “our” instead of “I” and “me” can help reminding people that we’re all together in it.

However, the biggest rule is to get rid of assholes ASAP. If you let them fester, it might be too late: they drive the great people away and hire and attract other assholes.

Sutton says that if you keep hanging with assholes at work, you will eventually start behaving like one. For example he realized that he started treating his wife worst while he was employed in an asshole-infested team.

If you can’t change job, at least try to reduce contact with the assholes.
And I particularly liked Sutton’s recommendation of increasing your emotional distance with the asshole. 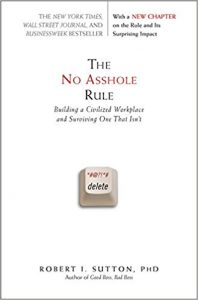 Use Assholes (or Distance Yourself)
I agree with the author saying you should keep distance with people disrespecting others or trying to get under your skin.
However, as the guy behind a website called The Power Moves, I’d actually welcome you to use the occasion to also spar with them and hone your power moves skills and social dominance understanding.
It’s too good an occasion to let it slip.

Lack of Details and Coping Strategies
While most of the analysis is good, there is a lack of powerful coping strategies. This is not an how to book or a power move resources for you to destroy or learn how to effectively disable assholes.
It’s not also highly detailed in the analysis of social dynamics of domination and aggression.

Well Researched
The No Asshole Rule is not just personal opinion, but it’s a well researched and data-backed work which I appreciated.

Good Psychology
I liked Robert Sutton’s psychological analysis and understanding of the phenomenon of workplace bullying and aggression.

The Asshole Rule is a quick and helpful read.
As a guy who’s always been a very careful observer of human nature and dominant behavior, most of the content wasn’t new to me.
And I find that a blanket “no to assholes” is more of a moralistic stance than a highly realistic one.

But I appreciated the statistics and recommendation.

If you want to learn to play the asshole game against assholes this might not be the right book for you (this website is).

But I recommend The No Asshole Rule to people who are responsible of business culture. And to those who want to understand better overly aggressive, dominant and overall unpleasant people.