Are you looking to better understand toxic people?

It’s great you are researching that, because toxic people can ruin your life.

By the end of this article you will know the signs of toxic people and how you can avoid them.

What is a toxic person?
A toxic person is anyone who is stuck in an endless cycle of negativity and who drags everyone around into them down.

Don’t try to fix them, because the vast majority of the times you can’t them.

Here are the most toxic of them all that you must avoid:

I write “men” as most abusive individuals, albeit not all, are men.

There are several types of abusive men, but all have something in common:

Many abusive men, especially the nonviolent ones, will keep the worst behavior behind closed doors.
But as soon as you get a sniff of any of the above signs, run for the heels.

Scarface is an example of abusive man with his sister (controlling behavior):

Emotional vampires act and believe as if everyone has to pander to their problems and emotional needs.

Your issues don’t matter because, well.. Theirs do.
They never stop to wonder if they are bothering you, or if you have something else to do. In their mind you are on this earth to act as their emotional tampon.

There are several types and layers of emotional vampires:

The Good Girl has an example of some of the worst kinds of emotional vampires.

You can be certain certain of two things in life: death and and that an addict will always try to get without giving.

Addictive personalities tend to get addicted more than others, to all kinds of substances:

You name it.
And they’re always looking for the next fix.

Everything is drama in the life of a drama queen.
They have one problem after the other, and they love blowing things out of proportion.
If one problem miraculously get solved -rarely thanks to their initiative- another one looms even larger.

Don’t even try to help them out or recommend them a course of action: they have an approach of impotency to life. You just wouldn’t understand how hard it is, they will say.
It’s not like they can fix it, you know.

They prefer complaining and complaining.
Their life, the war in TV, the economy, their spouse…

Drama queens will never change, they attract drama or they make it up.
So unless you enjoy drama yourself, stay away.

These are the people who are jealous about those who have it better.

Of course those others don’t have it better because they worked harder or because they were good.
Nope.
They got lucky.
Or cheated, or slept their way to their promotion.

Narcissists can feel, but it’s often shallow and they have troubles putting themselves in your shoes.

They live in a world of glitter and appearances.
And in narcissist-dom, they always hold a prestigious position in society.
Even when they are at the bottom.
Indeed narcissists have an overblown image of themselves. And if you couple that with weak ago, you understand why they are always seeking confirmation.

To keep up their image of high status, this brand of toxic people obsesses with what others think and with the external signs of wealth and power.

Notice her attention to form and her vanity.
And of course her reaction to her daughter’s news. Even her daughter’s pregnancy is about how it negatively affects her.

Sociopaths and psychopaths can be openly violent.
But they can also be hidden and sneaky.

They are extremely selfish, they feel no empathy or regret and they are obsessed with domination and winning.
This makes for an explosive mix.

Indeed, they often see life as a big chess game.
And the people around them are the pawns they will try to move -or destroy- with their games and machination.

Possibly sociopaths and psychopaths are the most toxic individual in this whole list.

Donald Trump might as well be a sociopath.
Look at his behavior in these instances:

This is different than the psychopaths or sociopaths’ way of being vacuous.
The high functioning psychopaths and sociopaths will pretend of having feeling to better integrate (and play their games).

But the vacuous will make no effort to look like a normal, emphatic person.

What do you mean. That’s a question right there.

LOL that says everything you need to know.

Vacuous can be a reaction to abuse experienced as children. A good movie for this type of dynamics is the movie Mysterious Skin -but it’s a difficult movie to watch, you’ve been warned-.

Sometimes there are a good reasons for which even honest people need to lie.

But chronic liars are different. They don’t lie because they have to. And sometimes not even becasue it’s good for them.
Chronic liears just lie all the time.

Are you waiting for them?
They are almost there, just a couple of blocks away.
They don’t show up in the next 10 minutes?
They’re just one block away now…

And once they get there, no they didn’t lie about their location!
They were late because of traffic or because they’ve been held up.

Chronic liars are toxic because a life with them is a life of second guessing, doubting and continuous fighting.
The dynamic will be you accusing and yelling and them denying. A relationship of cat and mouse, and you will soon lose all respect for a mouse who can’t talk straight.

You can’t have a relationship with chronic liars.

Finally, chronic liars who are very good at lying, also tend to have a strong gaslighting effect on people (ie.: make you feel crazy).

Power obsessed people see every feedback, argument or decision as a battle they need to win.

They can never admit they’re wrong and they have huge troubles in accepting even the smallest input from the people around.

Do you want to change channel on the TV and they weren’t even watching?
Just a minute, they first need to finish hearing something.

Do you need them to make a detour to pick up the cleaning?
Not today, they need to rush home to make an important -and nonexistent- call.

Men with a power obsession always know better and always need to get it their way.

Women most often fall prey of power obsessed men because they confuse their initial steam-rolling ways for strong leadership.
But it’s not strong leadership.
These men are in many ways similar to abusive men and make for an impossible life.

They will never complain, but they will keep building resentment inside.
Eventually, resentment will start spilling in ways normal people would have never seen coming:

People with weak egos are the everyday version of toxic people.

They go over the moon with compliments -forgetting that compliments mean nothing-.
And they swing the opposite side for every minor criticism. They get defensive, attack or go berserk on a full blown identity crisis.

A relationship with weak-ego people is very difficult because you always need to mince your words and think hard on how you can deliver the feedback.
But no matter how hard you try, they’ll still get hurt and do nothing with your feedback.
Except for hating you just because you said it, of course.

If you have anyone remotely resembling the toxic people in this list, detach yourself.

Detaching yourself is always the best solution.
But when that’s not possible, here are a few alternatives:

1. Play the same game on them

The best defense is the attack.
For example, to a toxic individual always asking for stuff, ask the same back:

Toxic Person: hey, do you have 50 I could borrow
You: damn you beat me to it, I was just thinking of asking you the same. Suppose you don’t have a 20 to spot me then?

If they badger you with their problems, cut the interaction short:

Toxic Person: and then they did this X and Y to me, can you believe it, unbeliavable…
You: yeah I can imagine. Look I’d like to stay and chat, but I need to go now

Alternatively, you can start talikng about yourself. See how they react. Do they bring the conversation back to them all the time?
They have no social skills -and couldn’t care less about you-. You don’t need those types of friends.

Then when you speak, open up again.
Basically here you are using your body to play the same game on them: a game of selfishness.
It’s a terrible race to the bottom of course, but as long as it helps you get away from toxicity, be it.

Pretend your phone is ringing, tell them you gotta run, say you got no time, mention you’re in a rush.
Use one excuse after the other until they understand you’re not there for their toxic behavior.

No, really, the best solution is to get away.
If it’s someone in the family, reduce contact.
There is no shame in scaling back with a narcissistic mother or a psychopath father.

They have done enough damage already and there is no need for more. 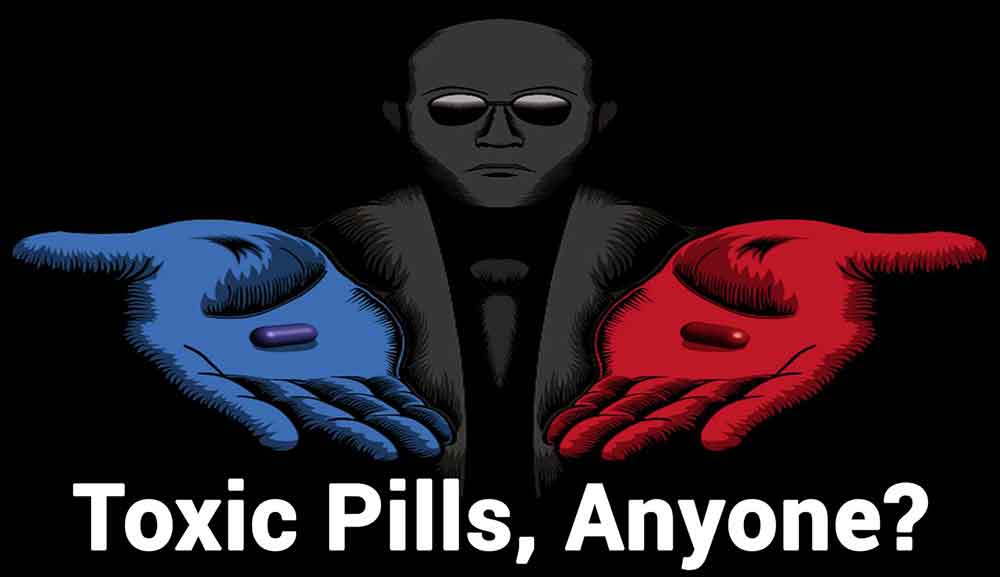