Underpriced's offer is ending. Price jumps in 8 days.
Enroll before it's too late.
Our Rating

About The Author: George Lakoff is a cognitive scientist and linguist. In “Don’t Think of An Elephant!” he does not hide that he is a fervent Democrat and a political activist.

#1. We See The World Through Frames

Lakoff says that frames are “mental structures that shape the way we see the world”.

Frames sit deep in our mind, but can be activated unconsciously by catch-phrases, references and simple words.

When a frame is already in place, it can be activated through words. Such as, when you hear a certain word, a frame connected to that word in your brain is activated.

This is important because even when you negate a frame, that frame still gets activated.
That means that when you argue against an opponent using their language and words, you activate their frames.

Thus, when you criticize your opponent with their words, you are reinforcing their messages.

Moral of the story: you must develop your own frames and say what you want to say with your own words.

If a moderate person who is partly conservative hears conservative arguments and messages over and over again, he will grow more conservative-leaning synapses.

And, over time, he will also become more conservative.

#3. You Need Frames Before You Can Activate Them

Frames do get activated by words, but framing isn’t simply coming up with fancy names.

To activate a frame, there should be a frame first.

And creating a frame entails repeating a message over and over until it becomes ingrained in our brains.

Reframing is more a matter of accessing what we already believe unconsciously, making it conscious, and repeating it till it enters normal public discourse.
It doesn’t happen overnight.

Because long-term concepts are instantiated in our brain and do not change overnight or by simply being told “facts”.

#4. Facts Only Matter if Morally Framed

Facts do matter, but only if framed in terms of their moral importance.

This is because if the facts don’t fit the moral frames you have in your brain, then you will reject them (challenge them, ignore them or belittle them).

For facts to make sense, they need to fit with the synapses already connected in our brains.

When There is No Frame

When there is no frame, you can’t communicate properly with a couple of catchy words.
The Republicans can do it with “tax-relief” because they worked for years on establishing the underlying frames.

The lack of an underlying frame is called “hypocognition”.

Lakoff says there are two different moral systems in politics, each underpinning Democratic or Conservative parties.

Incidentally, charity for the “deserving” few costs a lot less than taxes to provide resources for the benefit of all.
-George Lakoff

The liberal moral system is based on a nurturing parent.

Most people are not 100% in a system but operate different systems in different areas of their lives (“biconceptualism”).

The two systems can operate in the same person thanks to two mechanisms;

It’s with these people that framing and wedge issues work best: because they are the ones that can more easily switch between liberal and conservative.

George Lakoff draws a parallel between behavioral economics, with the work of authors such as Tversky and Kanehmann, and people’s voting pattern.

Same as people don’t always make the most rational economic decisions, they also don’t vote for the party that best represents their interest.
Lakoff says that people vote their identity.

Lakoff implies that it can be easily proven by the Republicans’ ability to cut tax for the ultra-wealthy, which only burdened the poorer class.

These are two examples of framing I loved from “Don’t Think of An Elephant!”

It was a genius move to make the middle class and poor people feel like they were getting something out of it.
“Relief” felt like it was a political move to unburden the people, to help them fly higher and be freer.

Bush said America wasn’t going to need any “permission slip” to “defend itself”.

He was leveraging the strict father worldview of the conservative framing and framing the interaction between nations as if between people.
It’s children who need a permission slip, and America was no child. America was the adult (also read “I’m OK You’re OK” for more on the parent-child role).

Orwellian language is the framing of a negative policy with its opposite.

For example, the conservative “Healthy Forests Initiative” is an Orwellian frame because it’s about cutting trees.

Promoting the name “climate change” instead of “global warming” is also an Orwellian frame, in Lakoff’s point of view (but I disagree there).

#9. This Is The Ultimate Republican Manipulation

George Lakoff says that Republicans want policies for the wealthy. But they need the vote of the non-wealthy.

To do so, they managed a great trick: to paint Democrats as elitists (“limousine liberals”, “liberal elite”, “tax-and-spend”) and the Conservatives as populists (Reagan’s cowboy image, George Bush’s Bushisms).

Don’t write “don’t hesitate to contact me”, because the word “hesitate” will make people hesitant.
George Lakoff says that when Nixon said “I’m not a crook”, everyone immediately thought he was a crook.

“I am not a crook”, and everyone started thinking he might have been a crook.

If you find yourself using too many negative forms, it might be the case that you haven’t developed a strong form of discourse that you can reference.

I have written extensively here on people who showed up into shows that were designed to ridicule, shame them or generally make them look like idiots (see Julien on CNN, Tucker Carlson and Neil Strauss on The View).

So I couldn’t agree more when Lakoff says to stay away from set-ups or, at least, to prepare well and always reframe (instead of simply replying to pre-frame questions).

Albeit I fully enjoyed “Don’t Think of An Elephant!”, there is also much I am skeptical about.
Including:

1. Correlation Is Not Causation

Correlation is not causation and the author doesn’t seem to notice it.

The author seems to over-connect political victories to frames.
But political parties alternate all the times.
I felt reading “Don’t Think of An Elephant” that the author falls for an all-too-typical human bias of seeing patterns where there are none (also read “Fooled by Randomness“).

A central theme of “Don’t Think of An Elephant” is that Republicans are winning the framing war.

But is it true?

Lakoff says that Republicans “hated each other” in the 1950s.
But then they got together and studies how to frame issues and how to win the framing battle.

Since then, they spent much money on think-thanks from the 1960s they gained the upper hand against fragmented and clueless Democrats.

The theory sounds interesting, but it’s utterly uncorroborated in the numbers.
I checked on Wikipedia and since 1960 there have been 5 Democratic presidents to 6 Republicans (and 7 terms VS 8).
And those include 2 Republican presidents who won by a whisker (Bush and Donald Trump, with Trump actually losing the popular vote).

Lakoff talks about a scientific paper on climate change.

Instead, he wanted the scientific paper to make bolder statements.

I can’t lie: right there and then I lost much of my faith in Lakoff as a scientist and as an authority source.

Indeed, little later, Lakoff shows the type of language that he prefers:

We cannot merely adapt to it.
The costs are incalculable.
What we are facing is huge.
Each day, the amount of extra energy accumulating via the heating of the earth is the equivalent of 400,000 Hiroshima atomic bombs.
Each day!

Lakoff talks about mirror neurons, as the reason why we can feel what others are feeling.
But mirror neurons in humans have been difficult to find and study, let alone link them to psychopathologies as Lakoff does (also read “Replication Crisis” and “Pop-Psychology Myths“).

Lakoff says that psychopaths can sense what others are feeling, not be affected by it, and then use it to manipulate them.
But that’s a big generalization (also read “The Psychopath Whisperer).

5. Very Partisan (But Honest About It)

That’s OK for me as long as he delivers great information -and he does-, but something to keep in mind.

For example, he keeps repeating that “the private depends on the public”, and to me that makes no sense.
Both the private and the public enable each other. Not seeing the obvious codependence, in my opinion, is a major lack of systemic understanding of reality.

The author bases much of his tirade on resources distribution on Piketty’s work.

Nassim Taleb in “Skin In The Game” says that Piketty got it all wrong.

I don’t know enough here to judge, but considering Taleb’s background in math and statistics, I’d go with Taleb here.

That being said, I do actually with the author when it comes to the general principle.

The author says that “religion like Catholicism and Islam promote population growth”.

Albeit that’s not fully wrong if you read what those religions say, it also flies in the face of what we know about sociology -and, as well, actual data-.

Catholic and rich countries are not making more children when they become rich and wealthy, thus showing that religion and natality are not tightly interlinked.
And a Catholic country like Italy is facing a huge natality crisis again proves that religion’s power to influence people on whether or not to make children is very limited at best.

There are a lot of statements that the author presents as truths but that are not references and that left me scratching my head.

When the very rich get exponentially richer and everyone else exponentially loses access to wealth, there is an inevitable pressure for short-term profits

Inevitable… ?
Based on what?

The author wants to make a point that Republican’s focus on security and securing the borders -and the world- is misplaced.

Most security experts say that there is no sure way to keep terrorists out or to deny them the use of some weapon or other; a determined, well-financed terrorist organization can penetrate any security system

What’s that supposed to mean, then?
That one should not invest in security systems? 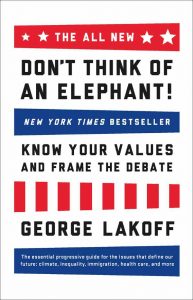 One of the best analysis of framing I have ever read.
Also read “techniques to outframe anyone” and “basics of framing“.

10 Frame Control Techniques to Out-Frame Anyone

Very interesting analysis of the different moral systems of Democrats and Republicans.

It’s uncanny how Lakoff seems to well describe some conservative thought leaders who emerged after -it made me think of Jordan Peterson and his obstinacy on good and evil-.

Some great analysis on how the Bush administration framed the war in Iraq and how it managed to get everyone’s approval for it.

The war benefitted big corporations but thanks to the tax cuts, the war was all financed by the poor and by the middle class.

“Don’t Think of An Elephant!” is a classic.

It could have been a classic and a top 5 book in both the “best persuasion books” and “best manipulation books” lists.

Unluckily, it’s also very partisan and it presents a lot of generalizations and unsubstantiated statements.

However, the good part on framing is really good and I can say that George Lakoff won me over with the depth of his analysis.

This is a must-read for anyone interested in psychology, influence & persuasion as well as political manipulation.