Group conversations are daunting for beginners.

But worry not, like most other things in life, it can be learned.

By the end of this post, you will know what are the top mistakes and the golden rules of awesome group conversations.

Some days ago I was sitting in a cool bar having a beer and laughing along with the guys.

We were all having a great time.

Of course, the fact that we were talking about women contributed to that group’s engagement, but… That’s no guarantee of great group conversation as we shall see.

We will call the socially awkward fella “party pooper”.

And as soon as Party Pooper barged into the conversation, the mood immediately soured.
Some nursed their beer, some looked away.. And everyone disengaged.

Party Pooper had effectively managed to bring the group from cohesive and engaged to removed and disjointed.

What had happened? How could the mood shift so quickly?

I can’t remember the conversation verbatim.

But this one below is a good close approximation:

…
Guy Who Gets It: And what about Cristina, what do you guys think of Cristina
Guy 2: Physically not my type, I like though how she’s always kind and welcoming towards everyone
Guy Who Gets It: Yeah she is awesome, but I understand if she’s not your type. But what’s your type then…
Guy 2: blabla
Guy Who Gets It: Oh got it, you’re into X, I like that too, what do you think about Cristina, Guy 3
Guy 3: I dig her man, nice body shape and the boobs, man, blablabla
Guy Who Gets It: Damn those boobs (smiles). Guy 4 also appreciates her boobs (looks at Guy 4)
Guy 4: I would blablabla
(Everyone laughs, ready to move on to some other topic / girl, when… )
Clueless Party Pooper: Oh yeah, about Cristina, I met this great guy at the conference in Rome, Paul. I was having a very deep conversation about her with Paul. We have a very good understanding, that guy is amazing, turned out both of us…
Everyone: *looking away*

You will notice that the Clueless Party Pooper makes a few mistakes all packed into one sentence.
Let’s see which ones:

The first conversation mistake is that he tries to bring back to life an already dead topic.

That’s a mistake people sometimes do when they try to remember something but cannot.
Then they finally do and say it even though the conversation has moved on. When that happens to you, don’t try to remember anything: you’re better off going with the flow instead.

But it wouldn’t have been the end of the word if he had quickly weighed in with his opinion.
The two bigger issues are:

You will notice Party Pooper takes the conversation where it cannot go anywhere else.

Beautiful conversations are like an ebb and flow of an ocean wave. They come and go naturally between water and land.
But he doesn’t pass the buck along to anyone else and neither does he throw any new meat on the conversational fire.

He just goes on a new road, all for himself, and it’s a dead end road.

That’s another common mistake, and when it happens you will notice that there’s a pause within the group where nobody says anything.

However, Party Pooper made a much bigger mistake it that would have made the job of an even skilled conversationalist much harder.
And it’s this:

3. Conversation Hijacking – And You Guys Are Out

The biggest issue of them all was that Party Pooper took a conversation that was all about the people in the group and turned into a “me, me, me fest“.

You will notice the conversation was entertaining not only because of the topic, but because everyone was chipping in.
And everyone’s opinion was being valued and appreciated (that’s the hallmark of a great conversationalist, as we shall see).

Imagine an inclusive line, and that line was all around the group. Everybody was in it, and that’s one of the reasons why everyone was so engaged and enraptured.

With Pooper’s interjection it became instead “me and this other guy”.
He basically took that red line and put it around himself and that new guy alien to the group.

This is what he did with a picture: 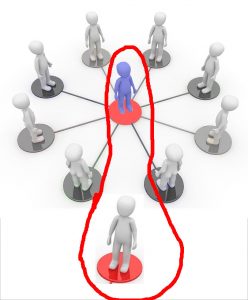 And that’s why nobody said anything or wanted to add everything.
It’s because everyone had been left out and with no way back in.

And maybe, just maybe, everyone deep down thought what a dumba** move the Pooper had once again done.

It’s a bit like this “italian guy” spoofing in Family Guy:

See how unsupportive that is?
It’s the equivalent of saying “you sucked… But me, mate.. Me I’m great”.

If you dig deeper, you will also notice that this is yet another form of social climbing.

Because it basically does these three things:

First of all Party Pooper throws a name of a guy at a conference nobody else attended and lavishes praise on this Paul.

If the person were famous, it would have been typical name-dropping and social climbing by association (check an example with Tai Lopez).

Since nobody knew this guy, Party Pooper needed to build him up first, which looked like he was fawning on him with the end result which was possibly even worst then “simple” name dropping.

He then proceeds to build this special connection with this supposedly great guy by associating himself with him -“deep conversation”, also a slight dig at our conversation-.

As we’ve seen a couple of times, the worst kind of social climbing don’t people don’t just raise the climber’s status, but lower the status of others as well.
Here it’s a bit less obvious, but it’s there.

By hijacking the conversation and building this “special understanding” with this great guy outside of the group he is indeed also slightly demeaning us.
Nobody in the group was allowed into their little bubble and nobody was given the stage afterwards.

Notice also that he doesn’t share what the content of the conversation was, making it seem as if the group wasn’t exclusive and special enough to hear about it.

For more on social climbing:

Unless you read a website such as The Power Moves -in which case kudos to you :)- most people are unlikely to consciously understand (or reflect) on what happened.

However, don’t let that fool you: on a less conscious level everyone notices.

And if anyone in that group were to have a party, what do you think are the chances Party Pooper will be invited? 🙂

Indeed albeit there’s no conscious understanding, the consequences are very much real and concrete.
People feel zero rapport with individuals who behave like Party Pooper and will most likely not like them all that much.

What’s the proper way of doing group conversation, then?

How To Converse Well In Groups

How to be successful in group conversations, then?

It’s about bringing a positive mood and having everyone engaged (positive doesn’t necessarily mean laughing BTW).

Guy Who Gets It, as the name suggests, does a lot of good things.
let’s see a few of them:

You will notice from the conversation at the beginning that Guy Who Gets It is working as a connector.

He is asking an opinion to one guy, then adds a bit of comment, and then passes the packet to another guy to further enrich the conversation.

He is allowing everyone to participate and chip in.

That’s why everyone is drawn in: everyone knows that his opinion matters and that his time to speak will come soon.
So, in exchange, everyone cares about listening and understanding what the others are saying.

2. Refrains From Too Many Comments

High value men don’t feel the need to always get their ideas validates.

And many high value men would rather take the “moderator role” in group conversations.

People who are dominant enough to take the moderator role and “pass the mic around” should know the N.1 risk of having group power: that of hogging the conversation.

You will notice indeed that Guy Who Gets It doesn’t talk at length about his own opinions.
He just adds quick remarks on each. And all of them are rapport-building, like: “I like that too”, “damn those boobs”.

Everyone feels connected to Guy Who Gets It.
And everyone loves him.

The other risk of being the one passing the mic is that you end up with a group which is too dependent on the moderator.

In that case, the group ends up like this one here (a Star Network type for the geekiest among you): 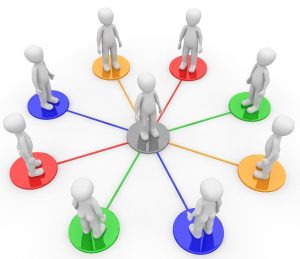 Star networks are fragile because they’re dependent on the central node.

So for building effective group relationships one should let the other nodes take part as well.

Back to people’s world, that means to let less talkative and shier people chip in and connect directly between themselves.

You will notice Guy Who Gets It says “Guy 4 Also Appreciate Those Boobs”, basically bringing Guy 3 and Guy 4 together as two people who both share the same tastes and liking.

Normally Guy 3 and 4 will also look at each other and add a few comments, which brings the two closer together.
With a good, engaged atmosphere, more people will jump in, thus strengthening the bond between them and bringing the group further closer together. 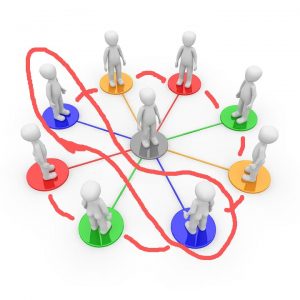 This is also a great way to introduce people by the way.
Find a connection or commonality between them and use it for an introduction. For example:

Guys Who Gets It: Matteo, meet Catherine, she also loves cooking

Guys Who Gets It: Caterina, meet Matthew, he also plays in a band.

That way you bring the group closer.
And once the group is closer, you can even exit the group because you have made it independent of yourself.

As John Maxwell said, the true test of leadership is time (meaning: what happens once you leave).

I understand that some people might think this is just a shallow example of group conversation.

Just talking about women with a beer, after all.
Well, I don’t fully agree: these are great types of conversations to bond and connect people together.

Furthermore, notice that Guy Who Gets It still goes for a quick dive into more personal territory.

When Guy 2 says Cristina is not her type of girl, that’s the perfect occasion to go a bit deeper, and Guy Who Gets It asks what type of girls does he like then.

That’s a deeper question than it might seem at first blush. Brene Brown in Daring Greatly righteously says we are on this earth looking for connections.
And guess what, romantic connections are some of the deepest connections we form.

Thus, asking about what type of partners one gel with is really getting to know an extremely important aspect of any individual.

There are of course several other techniques for successful group socialization.

But this article gave you a good idea on how to prevent some of the most common blunders.
And it gave you a few good ideas on what constitutes a proper group conversation.

The techniques in this article work best for when you’re the group moderator, the most extrovert one, the one who knows all the others in the group or the most socially powerful group member.

And make friends and spread the good vibes 🙂