If you are traveling around SE Asia -including Thailand- you need to learn a thing or two on how to avoid ladyboys and transexuals.

Don’t expect them to do it for you.

It’s your duty to learn, because, well… Some of them will lie to you.

My Experience With Ladyboys

As I write this post I am traveling around SE Asia, which is the region with the highest concentration of ladyboys.

Ladyboys are so many indeed, and often so indistinguishable from pretty girls, that many guys get a bit worried.

I’m no stranger to that feeling.
Ladyboys on the hunt are one of the things that make traveling around this world region a real pain in the ass.

Don’t ask me how I learned this stuff :). But I’ve traveled around here many times already.
And I had a couple of close calls myself. So this is my guide on how to avoid the ladyboy surprise -with the hope you won’t need to learn by experience :)-:

How To Spot a Ladyboy

Here are the major signs of a ladyboy:

This is probably the biggest giveaway.

Sometimes it’s super obvious, some other times a bit less so. The voice will not necessarily sound masculine, but it will be “off”.

It often sounds nasal, but there’s no point trying to convey an auditory signal in written form because it won’t help you much.

Check the video below and, in general, trust your instincts.
Trust your instincts: with women you rarely think their voice is “strange”.
So when you talk to a person who looks like a woman but the voice is somewhat “off”, that’s a big indicator.

P.S.: I’m only putting this video here as a resource to recognize a ladyboy’s voice.
It’s a crazy prank, but I also find it somewhat distasteful. It kind of rubs me off the wrong way (but the ladyboy seemed to enjoy, so it’s all cool).

Of course, this won’t help if you’re doing online dating.

This is the obvious second one and you’ve probably heard them before.

Adam’s apple comes up first often and I’ve heard it many times, but it never helped me much.
I have found hands to be most useful.

Especially at the touch: if they feel like coarse, hardened hands, you might not be the only who’s ever gotten hard there :).

Whenever I hold a woman’s hand and they’re soft and “womanly”, I breathe a sigh of relief (but that’s not the ultimate indicator, some take supplements!).

3. Ladyboys Tend to Be (Sexually) Trashy

Ladyboys often overdo it with their sexuality and show more than most girls would.

A little story from a couple of years ago when my LB spotting skills were hovering around the absolute zero:

I was sitting with a girl who flat out denied her ladyboys-ness and got offended I even asked.

Little later, she proudly volunteered to show me a video of some idiot smashing her from behind.

Now I’ve crossed my path with a fair share of women, including one who recorded our session, but never a girl showed me her videos having sex.

It doesn’t mean there aren’t such women of course, but when sexuality is thrown at your face, keep in mind that red flags come with long poles :).

This also includes sending you un-requested pictures of her looking hot and/or skimpily dressed.

Girls will rarely volunteer those pictures before you’re already lovers. Ladyboys do so very gladly.

Women, even when they like you, tend to be coy and more reserved.

Some women who really like you can even be nervous.

But not ladyboys.
They’re excited you’re considering them and run towards you at 100 km/h.

Watch Out For Hotel Visits

And if you meet online and they agree to come straight to your  hotel/place, watch out, that’s another sign.

Plenty of real women will do it too, granted, so don’t avoid it just out of principle.

But still, consider it another check for you to worry about. She might bring along a little surprise for you 🙂

If you’re in a committed relationship you’re probably thinking “oh no dude, that’s what all women do”.

But women at least have the courtesy of roping you tight and strong before regaling you with their full range of behavior :).

Not ladyboys though. Straight off the gates, they make a big show out of everything: much of what they do looks like a cheap show they’re putting on.
They are also more easily upset as well, and albeit this is highly unscientific, I’m not the only one who noticed.

Ladyboys will accentuate any feminine trait while covering up their masculine ones. This means:

Basically, anything that looks like someone is trying too hard to look and act like a woman is another indicator for you to worry about :).

If you’re doing online dating, you will notice that lots of girls these days have their Instagram there or anything else where you can “follow them” -do not follow them of course :)-.

Ladyboys go one step beyond though.
Eager to move things along with you, they will often also have their contact details such as Line ID, number, WhatsApp, etc.

Jobs such as “freelance model”, “CEO”, “owner (by myself)”, on top of being an indicator of low quality women, can also be LB indicator, albeit not as strong as the contact info.

And of course, I’m not joking here.

Make yourself no qualms.

If you’re traveling in SE Asia or Thailand Always ask.

Not when you’re unsure, not when you think she might be, but make it a habit.
You’d be astonished how often you can be wrong.

Don’t think the girl will be offended: from personal experience I can tell you they won’t if you ask un-judgmentally.

If the first time you’re a bit queasy, you can easily spin your question into a compliment.
For example:

You: You never know here, some of the prettiest, best-dressed girls seem to be ladyboys and you’ve got such a great style.

If she’s a woman she will likely appreciate you’re only into women.
And last but not least, the question serves as a screening device as well: with her answer she had to “prove” herself to you.

She jumped through your screening hoops and… For that question to be relevant, she also admitted you two might be getting sexual.

Three birds with a stone.

Any time you get evasive answers, avoid. Chances are it’s not a real woman:

The Limits of Asking

A few guides and answers around the web present asking as the final solution.

And then they add you can ask to the manager.

These guys are referring of course to paid hookers working at go-go bars. Those working girls are much less likely to lie about their gender.

But if you’re like me and don’t do pay-per-play, then you can still meet a few bad apples who will lie about their true gender.
Once I went out to meet a Tinder girl who told me she was a natural girl. She wasn’t.

Oh, and here is one more tip.
If you ask and they reply with a sexy picture, then she is a transgender: 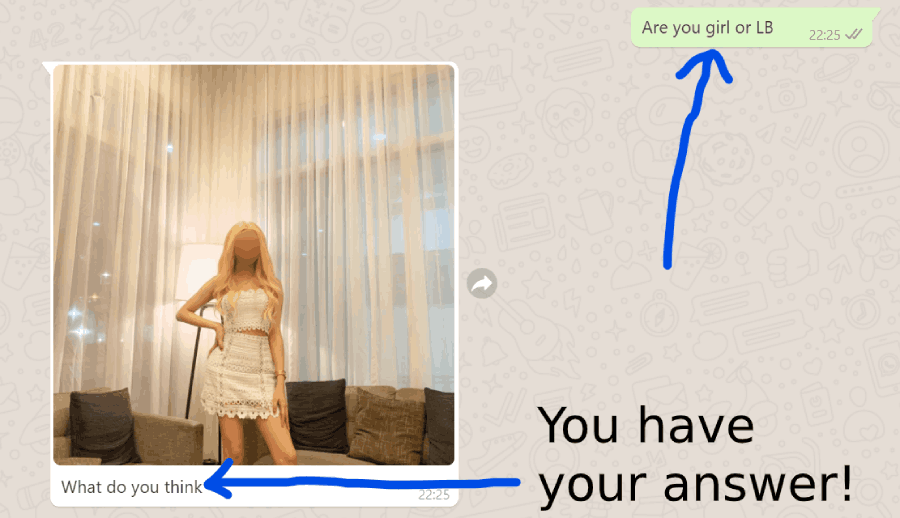 This is the very final step.

Some ladyboys will be fully post-op in all areas.
And after years of hormone therapy (estrogens), their skin is softer than a real girl.
Technically at that point, they’re not even ladyboys anymore.

However, their surgical vagina still doesn’t get naturally wet.

Which means that if you’re closing in and they tell you they need an external lube… You might wanna think twice about it.

And what if all else fails?

I often don’t kiss on the mouth while leading to sex and prefer neck and body kisses instead.

You might not agree with that, but you might want to do it in Thailand, Philippines or any other region with lots of ladyboys.

Because none of the previous step is foolproof.
Anybody who’s telling you they can always spot a ladyboy is lying.

When the worst pangs of ladyboy-induced paranoia set in, you might want to do the same.

Start kissing on the neck and remove her panties first. Once you make sure there’s a nice vagina there… Nice :). Now you can relax and enjoy the ride.
And If you find a surprise instead, smile: I just saved you a make-out session with a man :).

How to Avoid Ladyboys in Thailand

There’s a saying in Italian:

Most ladyboys will tell you they are ladyboys.
Those are cool.
Most is not all of them though. Some will play offended you even asked and insist they are women.

And I have met those “bad” types of ladyboys most often in Thailand.

Some ladyboys will go as far as scheduling their period and carrying tampons with them.
Don’t count on those to tell you the truth any time soon :).

And many ladyboys in Thailand are very thirsty for di*ks, especially foreign ones.
So as a foreigner you’re a juicy target for ladyboys.

A few guys have that bragging attitude they’d never be fooled.
Most of those guys are the easiest to fool.

It goes beyond ladyboys and to life in general: let people think they’re too smart to be fooled and you just made it easier for anyone to fool them.

My recommendation to be on the safe side while traveling in Thailand is this: until you see a vagina, don’t kiss on the mouth.

The Man Who Thought He Had Sex With A Woman

For those of you who still think they can’t be fooled, here is the craziest ladyboy fooling ever happened:

Shi Pei Pu, a Chinese ladyboy, fooled his French boyfriend for 18 (!) years passing herself for a woman.

Shi Pei Pu never even had his penis removed and even kept dressing as a man during the whole time (!).

And if that’s not crazy enough, She Pei Pu had his beau believe she conceived a son, got doted on for years and even manipulated him to spy on France.
Read the story on Wikipedia.

I care about clarifying: this is not an article to hate or judge.

Lying about one’s true gender is not cool, but I wish the vast majority of honest ladyboys all the best: it’s probably not a super easy life in many ways.

And I’m glad some people like katoeys or don’t mind if they have sex with a woman or with someone who just looks like a woman.
It’s a good thing these people exist, so they both can make each other happy.

Some others would rather avoid the ladyboy experience though.
And to be the safest, you gotta take that responsibility on yourself.

This article will hopefully help you to stay safe and ladyboy-free. 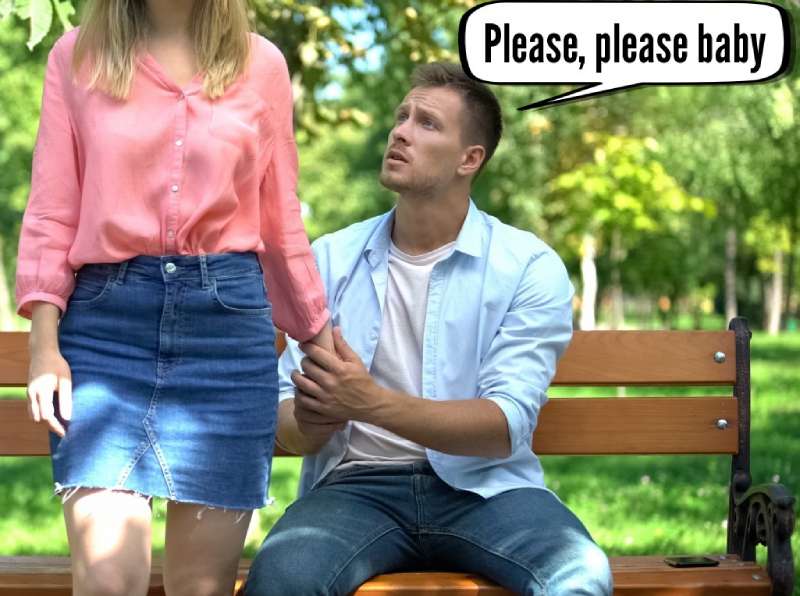 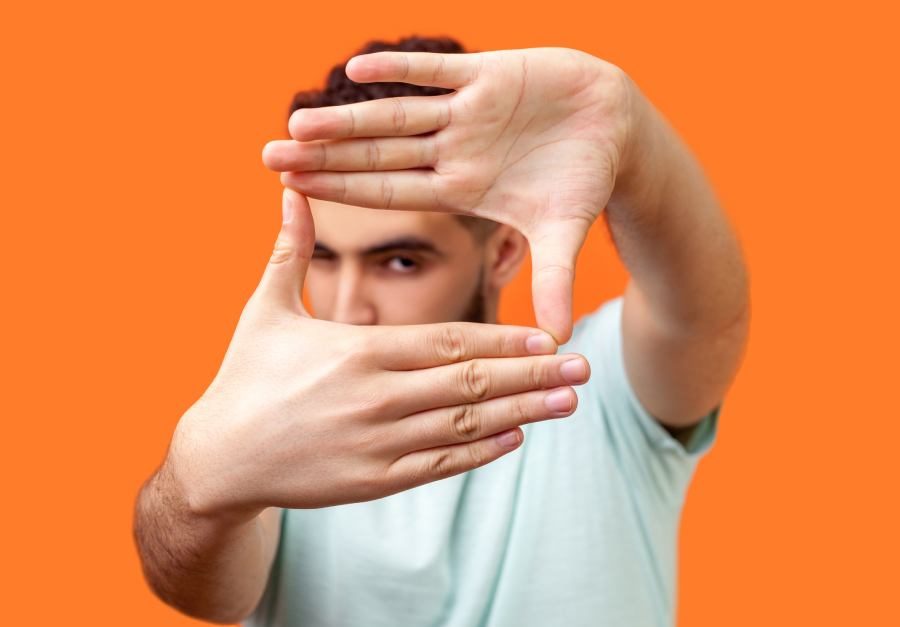 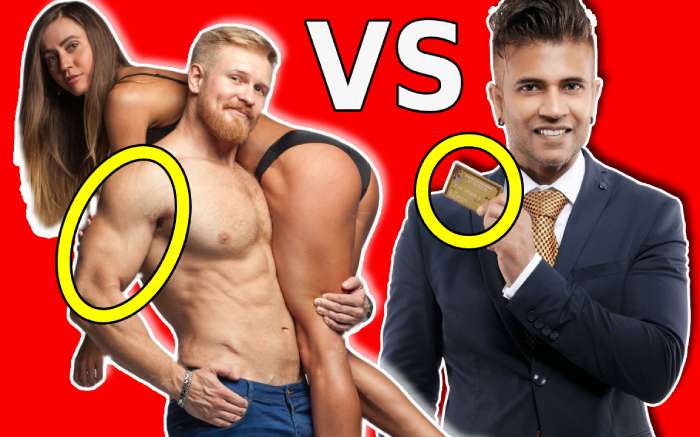 Short Thank Yous and Feedback - E …by AJ1 hour ago