Frenemies are so common that they are not an exception.

They are the rule.

Frenemies feel two ways about you:

How to Spot a Frenemy

If you want to spot your frenemies, the best you can do is to improve your reading of social dynamics, nonverbal commuication, body language and, overall, increasing your emotional intelligence.

This guide helps you doing just that:

1. Jealous of your achievements

Frenemies tend to be more focused on threats than on opportunities. They often don’t see themselves in control of their life and their success.
Their biggest successes indeed comes when the people around them fail, which helps them feel better about themselves.

Their “strategy” to feel good then is to see you fail (or at least don’t make you feel good while you win):

Some of the most extreme and out-of-control frenemies can’t control their jealous tongues.
And they will comment off the cuff that your achievement was “OK”, “lucky the top performer wasn’t there” or “well, you finally made it, you’ve been training so hard for it”, as if to say why did it take you so long.

They will not compliment you when you win, or they will do with a tense face and a fake grin.
If they are part of the audience, their clapping will be barely audible: they don’t want to add a single decibel to the sound of your success.

When people blame you for their failure or say that they achieved less because of your actions, that’s a strong sign that they see the world -and the relationship with you- as competitive.
You can never be real friends with these people, frenemy is the only possibility.

Frenemy: If you hadn’t done X, I would have won

I have personally heard this format a few times, and it never failed to identify a frenemy

Note: this can also be the sign of a paranoid personality. In doubt, only underplay the issue, say it just went that way but that they did very well.

2. They find underhanded ways to hurt you

Since they must keep a semblance of friendship but deep down they also want to hurt you, frenemies heavily engage in passive aggression.
For example:

The more astute players will devalue their frenemies not by attacking them, but by raising the value of their opponents.

Here is an example from Meet The Parents where a compliment to one ends up being an obvious dig to someone else:

If your “friends” seem to often end up praising your opponents, it might be a sign they’re not a friend at all.

Hurtful humor is one of the main ways frenemies let out their spite.
You know how this one goes. They make a hurtful remark and then they hide behind the “I’m just joking” shield.
Read: how to deal with mean jokes.

Delivering compliments that seem nice on the surface but that are actually thinly veiled attacks.
For example:

Frenemy: Good job. When you can pull yourself together you’re not that bad

Obviously this one suggests that most of the times you can’t pull yourself together.

Or, as Robert Greene notes in The Laws of Human nature, praising the money you made with your success, thus implying it your venal streak and degrading your work to a mere money-grabbing scheme.

Frenemies will look at opportunities to sink you.

They make it sound like a duly correction, or even like an advice.
But the meanness in it is bursting at the seams.

This is an example from a Whatsapp group of mine. We were talking about GDPR: 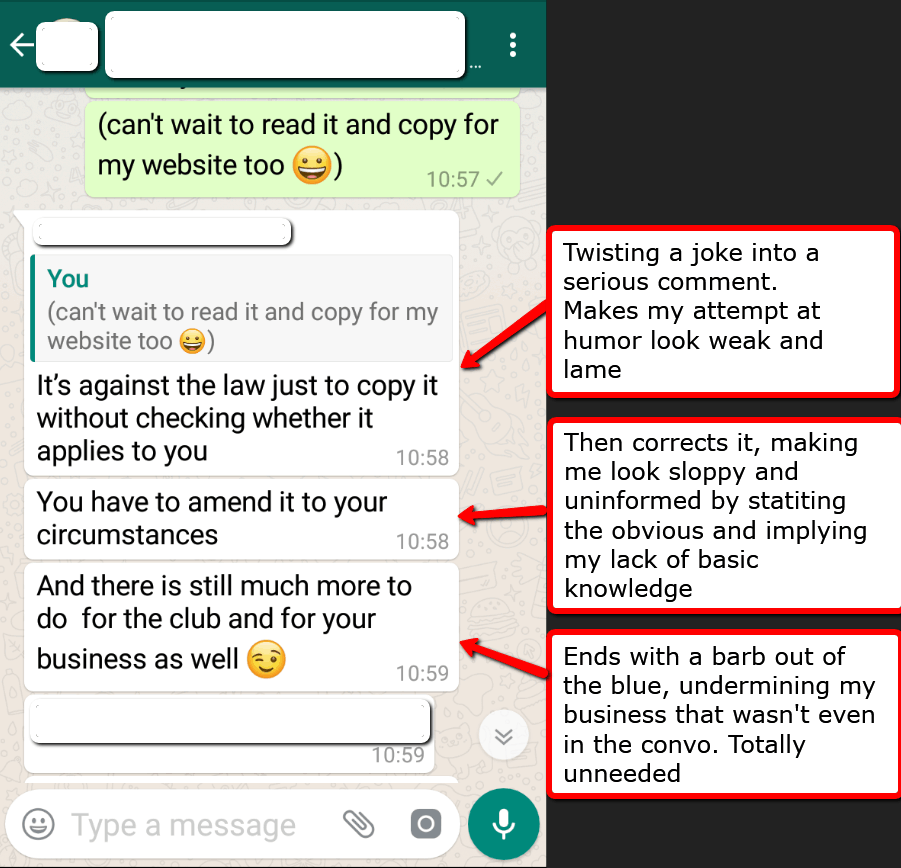 But if you take care of developing an antifragile ego they’re actually doing you a favor here: the more criticism you get, even mean criticism, the more likely it is you can improve.

3. They talk behind your back

Frenemies are very open about your shortcomings… Just they won’t say it to you. But they will run their mouths to your group, your other friends and just about anyone with whom they can assault your social status.

You can often spot a frenemy because they will be all too happy to report something bad that someone said about you.

Of course they won’t agree with it, but deep down you can see a twinkle in their eyes that they are overjoyed at the chance of hurting you.

Try to run this experiment:

Showcase a big win or an achievement of yours on Facebook. Then notice who likes it and who comments on it.

You might think that a like is easier to fake than a compliment, but many frenemies are so paralyzed by envy they can’t even bring themselves to a like.
They hate it so much to see you win and happy that they can’t even manage to click a like. If you ask them, of course, they haven’t been using FB all that much and missed it.

But the biggest giveaway is this: they don’t like your update but they inbox you for more info.
If that’s the case, reply late and vaguely.

… Or they make negative comments

Look at this example.

I uploaded a picture to celebrate this website hitting the 5.000 visitors a day.

I knew that the lamb saag looked like dangerously like human’s waste.. And I was looking forward to see who would point that out.

I love finding out who my frenemies are.
In this case: two birds with a stone.
That guy who liked the comment without liking the picture is even worse:  that’s basically a confession of his bitter feelings.

5. Lots of questions without (good) advice

People who are really interested in you and happy to help will make lots of questions, but they will also share their own experiences and give you good advice.

Frenemies will also ask you lots of questions, but they do it as a way to weigh up an enemy. They ask you, almost afraid that your answers will be positive, and they won’t give you any (good) advice.

If your news are negative, they’ll secretly be happy and tell you that “it’s OK and you will do fine”. They’ll never tell you to get up on your feet and get working because that’s what most likely to make you successful.
And they don’t want that.

“So adorable” – she hates it. Typical frenemy.

If they often end up hurting, sabotaging you, or otherwise decreasing your performance, you have a strong indicator you’re dealing with a frenemy:

This one belongs to the very worst category of frenemies and the ones you absolutely, positively must remove from your life.
Here is how a deliberate mistake would look like:

Her: Jenny! I’m so sorry honey! I forgot to tell you this is an all white party. They won’t let you in like that

Yep, she just forgot, how scatterbrained of her.

They might say something mean about someone.. Only to realize you’re friends with them, or they’re just like you.

Him: Ahah of course nobody wants to date him, look how ugly he is, he is balder than a bowling ball!
(turning to you and trying to make the people around laugh at you)
Oooops, sorry man, didn’t mean to offend bald people

He surely didn’t mean it..

Frenemies will smile and talk nice to you.
But their body language will betray their real emotions.

This whole exchange of shoe-shaming from SATC screams fake and frenemy to the core:

When you can spot a similar pattern in your friends… There is probably no friendship there.

I wouldn’t approach a frenemy with a fighting mindset at all.

First of all, you don’t have anything to gain and it will displace your energies from something better.
Life is not meant for fighting idiots.

And second, frenemies are a normal part of life.
It’s simply how many people are wired, and wherever you go chances are that you will deal with at least some of them.

The only exceptions are environments of super high quality people where everyone is going after their own dream and goal and where everyone is more focused on self development than on pushing others down.
Try to move into such an environment and spend less and less time with the frenemies.

But if you really wanna fight them..

Alright, I’ve given you the peace & love spiel.

Now, if you really wanna fight them here is how:

Whenever they attack you, don’t stand here like a thunder from clear sky hit you, but hit back.
Here is the example of the bald offense:

Him: Ahah of course nobody wants to date him, look how ugly he is, he is balder than a bowling ball!
(turning to you and trying to make the people around laugh at you)
Oooops, sorry man, didn’t mean to offend bald people
You: I don’t know if he’s ugly maybe he’s got the moves. Something that wouldn’t hurt Mr. Pudgy here (touch his belly or pinch his arm).
Oh, guys, I always wanted to ask you this but always forgot..

Note that touching is also a sign of dominance which will make you come easily on top. And now it’s difficult for him to retort without escalating. But escalating would mean he shows his ugly face, and in either case, you win.
The last sentence there moves on -always a good idea after you deliver a strong blow- and shows leadership qualities.

In the example of the party, find a way to get in anyway. Then be the diva in a place of white sheeps.
Remember, with frenemies the very best revenge is runaway success.

Even if you decide not to fight them but to minimize contact, which I hope you will, it’s still good practice to assess how dangerous they can be.
This is the rule of thumb. When they go for:

Diirect attacks can be more unsettling but at least the competition is out in the open.
With indirect attacks, you’re never sure what they’re up to and what rumors they’re spreading. Watch out.

Frenemy is not a constant.

That means that if you are going through a rough patch and a frenemy of yours is going strong he won’t see you as competition anymore and you’ll drop off his frenemy radar.

That guy won’t be a frenemy… Until you get back on your feet.
Or until he gets back on his knees.

So the best way to get rid of frenemies? Move ahead in life and leave the frenemies in your dust.

However, that won’t remove frenemies for ever unluckily.
As you move ahead, new frenemies who before thought you were too beneath them will pop up.
And in a way, the more successful you become, the more you will attract envy and jealousy. And the more you will see the ugly face of fren-dom.

So smile, don’t get too hang-up on frenemies. And to paraphrase someone:

Many frenemies, much honor.