Date-onomics reviews how the gender ratio (men to women) affects  behavior and personalities, both within dating and outside of dating.
It is a must-read for anyone who wants to understand human’s behavior -and dating-.

Jon Birger makes a compelling case that the falling marriage rates, hook up behavior and a chronic lack of good caliber men willing to commit in the college-educated cohort are all byproducts of lopsided gender ratio (ie.: too few men compared to women).

Not Enough Men With Degrees

The issue for women holding a college degree is that, historically:

I laughed hard when the author quips that “it’s not that He’s Just Not That Into You, it’s just that there aren’t enough of him”.

Why So Few Men With Degrees?

Where Does It Happen?

Birger says the issue is present in almost every developed country.

What does it mean to you?

Birger draws parallel with other nominally monogamous animal species and notes that the effects of changing the gender ration are stunningly similar.

Scientists seem to agree that, albeit changes impact both gender, they affect men more than they affect women (you can see similarities here with evolutionary psychology literature such as The Selfish Gene and The Moral Animal).

When there more women than men, men are:

When there are more men than women, women also are more likely to cheat.

But not as much as men.

Most importantly, women tend to become choosier. Their focus is on screening men harder as they look for the best they can get.

The author quotes the book “too many women” -which I’m planning to review soon- in assessing the cultural changes of gender ratio.

More men bring a culture of courtships, romance and men doting on women.

But when women outnumber men, women are more likely to become sexual objects.

Other consequences of fewer men:

Other consequences of fewer women:

Is Feminism The Consequence of Disgruntled Women?

The author links the rise of feminism to the woes those same women face with men.

Since men are hard to come by, women are more likely to focus on work, career and possibly politics.

As we’ve seen, when men are in short supply, women are treated poorly and more like sexual objects.
So, since women are more and more at the mercy of men, they fight back demanding more rights.

Couple that with the possible resentment towards men, and you have a major driver for feminism.

Let Him Chase is Bad Strategy!

I almost wanted to cry when the author debunked the idea that most women’s dating books sell: that you have to make him chase and invest.

No, Birger explains: in difficult markets it’s the assertive women who get the guy.

These are the women who meet the guy, play little unavailability games and who ask for the relationships.

Thank you Jon Birger, more women should heed that.

Why The Best Women Remain Single

The author tackles a few more interesting phenomenon, including:

Get the book to read the answers to those questions. 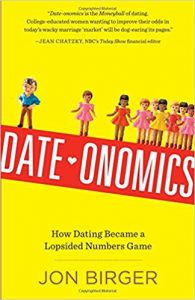 There were a many “empirical evidence stories”. I get a bit skittish when I read the micro stories as evidence for the whole.
But, overall, this was not the case: Birger uses enough data to back up the stories.

Date-onomics is a crossover between a sociological research, a data-driven scientific paper, and an evolutionary psychology text.

it’s one of the most eye-opening books I have read, and I listed in my “best red pill books list“.
It’s one of those rare books that made me excited about the new amount of wisdom I was absorbing.

Date-onomics is not a dating book in the strict sense, but I would consider it one of the best dating book one could read. And certainly it was the most eye-opening for me.
Way too underrated and super recommended.