Are you interested in ways to make him invest in you?

You found the right article.
And it will drastically change the way you look at men investing in you.

How Does A Man Invest In A Woman

Any act of caring or adding value to her life and well being which requires the expenditure of effort or resources.

Sounds too abstract and theoretical?

OK, here are some simple examples then:

As you can see, investing is mostly good.
Even better, investing in each other is what great relationships!

Common investing might as well be the single most importnat indicator of a great relationship.

But one partner investing a lot in the other without equal investment back…?

Not so great, as we shall see (and not good for your dating effectiveness, either).

Let’s begin with what the dating literature says on how to make a man invest in you:

Most -if not all- women dating books and resources say that you should let him invest in you as much as possible.

It’s a common mantra in:

Most of these books have indeed common the idea that the more you get and the least you give, the better it is.

Why Everyone Says He Must Invest More

The idea of letting him invest heavily is that:

And for the most part, these are all true.

Why It Makes Sense (on paper)

These are the advantages of the typical dating advice on making men invest in you:

Generally, you don’t want men who invest very little because they don’t make for great relationship partners -and same is true for women-.

And as a rule of thumb, fuckboys and womanizers tend to invest less.
So it might be true that pushing for him to invest more could weed out the players.

However, as we shall see, it also weeds out more discerning and experienced men who are simply not OK with being “pushed” into more and more investment.

We tend to like less what’s very available (Cialdini), so investing little while receiving lots will “safeguard” your feelings indeed.

This is only good if you don’t want to fall in love, though.

This is probably partially because of sunk costs (Coleman, 2009) and back rationalization (check Incognito by David Eagleman).
But in a nutshell, it’s true: the more one gives to you, the more he values you.

There are exceptions (especially in difficult markets, read The Eligible Bachelor Paradox), but overall the theory does make sense.

But now, the big question:

Who does it work with?

The Drawback of Making Him Invest

Social relationships can be seen as big exchange markets.

And the Rule of Social Exchange postulates that good relationships tend to reach a balance of value -who you are- and investment -what you do for the other-.

One corollary of the social exchange theory is that when one side has some major lack in overall value, he must make it up with “external value injections”.

Investing is indeed a way of making up for a lack of value.

So when you make him invest a lot, this is what the relationship looks like from a purely exchange-driven model: 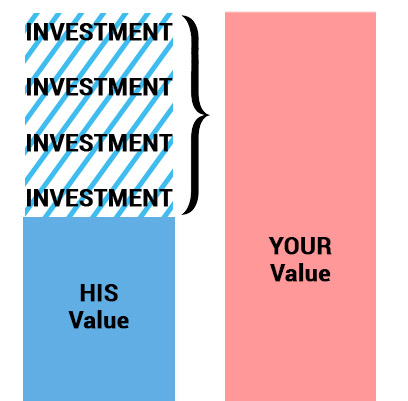 Now, can you start seeing what “forcing him to invest a lot can be an issue?

As for anything people-related there are exceptions of course, but, as a rule of thumb: the men who are OK with investing in you without equal amount back are the ones who are not good enough for you!

Yes: it’s mostly men who feel they’re not good enough for you will over-invest.

When they cannot bring enough value with who they are, then they throw on the table different kind of extra services, such as:

On average, men who invest a lot tend to be less experienced, less valuable and more lower-quality types of providers (see: providers and lovers).
In short, they often don’t know any better.

Here’s an example which always cracks me up:

When he says “I thought I did everything right”, he refers to investing a lot.

ROI is a financial term that means “return on investment”.

And it applies to dating as well.

We all have an internal system of value exchange, and we all seek to keep balanced.

What does that mean to you?

It means that men who are around your same value or higher are unlikely to invest a lot without requiring equal amounts back.

This is how it looks like with bar charts: 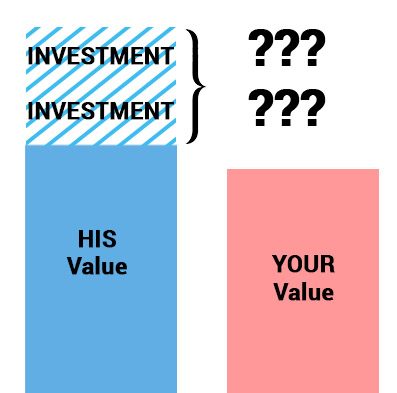 These guys will invest the first time and then… And then they will expect you to do the same. They might not be aware of it consciously, but unconsciously they expect something back (unless they read ThePowerMoves, in which case they will consciously expect it :).

And when they see nothing is coming from you, they will feel something is off.

And what will happen if you keep following the typical dating advice and expect even more without giving?

Bruce Bryan of Never Chase Men Again hits the nail on the head when he says that men with a backbone will flee very soon if you demand without giving.

Indeed those guys will think you’re an entitled woman, with big demands and little to show for. That’s a big trait of socially clueless women and low quality women.

That’s why I highly recommend you don’t seek to make him invest without giving equally back.
Because high-quality man might be very happy to date you… Unless you start demanding and expecting over-investment, in which case you are driving the very best men away.

Power Move Tip:
Strategically, you can differentiate between men.
You might for example seek investment from the clueless ones who are blind to the imbalance.
While you can seek a balance with the cooler and smarter ones.

Making Him Invest: The Right Way

What’s the alternative then?

The alternative is reciprocal investment escalation.

Let him do the first step, and make sure you reward him and make him feel good, which will encourage more giving.
Give something too, which will reassure him you’re in it as a contributor as well.

And the virtuous cycle of mutual investment will start feeding on itself.

Not only this attitude of reciprocal investment will foster more and more giving, but research shows that partners in equitable relationships are happier and last longer (Equity Theory of Love).

See here a chart bar example of how a woman can lock in a higher quality man (starting from the bottom):

Let’s now dig deeper on how you can get into a great relationship with the mutual investment virtuous cycle.

That’s how you show him you’re a keeper.

That’s a woman he feels he can rely on for life, which is indeed a major trait all the male authors highlighted in women’s dating books.

Emotional investment is a subset of overall investment, but it’s the most important.

Bruce Bryan recommends you open up first and show your vulnerability.
If he shows nothing, it’s not a good sign: he might be an emotionally unavailable man or an avoidant attachment type.

If he does he replies with is own emotional investment (ie.: opens up, listens, asks more questions, increases intimacy etc.) he’s a keeper.

I like the idea of making the first move and gauging the reaction.
But whoever makes the first major overture, the pattern is the same: one step each.

Building the tower of a great relationship is a common effort. One brick at a time, one brick each.

The idea in most dating books for women is that you must make him invest as much as possible and he’ll fall head over heels for you.

While that’s true, I explain in this post that mostly works for the least outstanding of men.

And while you do want him to give, you should always take warmly, make him feel about giving and give a little bit back.
Keep escalating in lockstep towards mutual investment and commitment until you step together to the alter (if that’s what you want).

Also check:
Why you shouldn’t use sex as a bargaining chip.