Getting into a leadership position can be difficult.

But what’s even more difficult, as history has proven over and over again, is keeping that power in the long run.

Power indeed often rests on shaky foundations: people want you there, but they also resent your power.
But by the end of this article, you will know how to keep power over the long haul.

The Ambivalence of Power

The main reason why power rests on shaky foundations is because of people’s inherent ambivalence towards people.

When things go badly, the same people who came to give you the crown will now come clamoring for your head.

In the past, heads have been rolling literally.
And executions were big public celebrations:

Note: Staying power with gullible subjects is easier
Notice how sis charisma still gets through the sheep, even when those sheep were there to see him die. If you’re leading gullible people, staying in power is easier.
It’s when you’re leading more intelligent and/or people more at your level that it gets more difficult.

Heads roll more seldom these days, but don’t think it’s any easier to stay in power.
We’re exactly the same people as centuries ago indeed, and we can see the same pleasure of seeing our leaders crumble whenever a big-name politician loses a major election, or whenever a new big scandal hits the news.

The pleasure, of course, is double when the one who fell was a bad leader, like with Theranos’ Elizabeth Holmes.
Then we can all bask together in the crowd’s animal spirit, taking our sweet revenge on those who got all the leadership perks, but eventually betrayed us.

However, often you don’t need terrible leadership to lose your power.
That ambivalence can be easily tipped towards the negative even with average or, sometimes, even with good leadership.

From a social dynamics point of view, the change from support to resentment can be swift and sudden. And it catches most leaders off guard.

Leaders Only See The (Positive) Tip of The Iceberg

Most leaders fail to see the ambivalence of leadership for three reasons:

Leaders mostly see the hand-clapping, the babies handed to them for kisses and pictures, the smiles…

And until the tipping point is about to reach many leaders fail to read the changing times, possibly unconsciously trying to cling to the status quote.
He dismisses the backhanded compliments of the frenemies, the slight disrespect, the passive aggression.
And he focuses on brown nosers, cronies and the many sycophants who fail to see the end nearing.

But what is it that causes leaders to lose the goodwill of the people they lead?

Some people say that power corrupts, while some others disagree.

I think we have ample evidence that power can corrupt. Or, at least, make easily-corruptible people worst.

History has shown it to us more times than we can count.
Leaders get power, maybe through fully legitimate elections.
And they soon forget they weren’t bestowed power by birthright, that they are not there to enjoy fame, fortunes and the trappings of power but that they are there to lead.
And to lead means to move people and the organization towards a better future.

Instead, they get used to the power, to the attention, to the spotlight and to the trappings of leadership.

This is entitlement kicking in.
And albeit entitlement coupled with strong and forceful action can be helpful in quickly climbing dominance hierarchies, entitlement almost always loses you the people’s goodwill which, in turn, makes it hard to keep your power -at least legitimately-.

An important caveat indeed is that the people’s goodwill might not matter much in dictatorships.
Dictatorships follow different rules. But since most readers are thankfully living in more or less democratic countries, we are talking about non-dictatorial power here.

And in any democratic organization and in most groups, leaders and politicians can be voted out. And leaders are often voted out, independently of their results, simply based on how much people like them (or dislike them).

I have witnessed a politician after the other having fallen prey of entitlement and got the boot because of hubris.

I list some famous people here so you can check them.
But you don’t need to be a president to fall for the “power’s entitlement trap”. Any position of power, even among your friends, carries the same risks.
The general rule is this: the more you start acting like a king who’s above everyone else, and the more people will come to resent you.
And it those resentful people can vote, join forces, or find the power to boot you, they will gladly do so.

Even if elections weren’t a problem, the results almost always suffer when leaders become entitled and egotistic.

Entitled leaders grow and ego and close off and new ideas.
It’s similar to the effect of a fixed mindset, and they see any bad news as a sign of dissent and an affront to their power and authority.

People sense when that happens and they start disliking their leaders.

This is what happened to French president Nicolas Sarkozi, Matteo Renzi in Italy and, recently, Emanuel Macron who saw one of the biggest street protests to rock the Western streets in modern times.

This was a very telling video of Macron’s increasing entitlement and “power haze”:

He was right in demanding more respect from the snotty kid, but the way he did it, it deeply reeked of entitlement and a huge ego.

People feel their leaders’ ego ballooning and they wonder whether they are in charge to feed their own ego or to lead them.
When that happens, respect dwindles and goodwill disappears. The disconnect grows and resentment also grows.

In the worst cases, leaders who can manage to cling to power in the face of growing push-backs become paranoid.
They spend all their time and energies to fend off enemies, whether they are real or imagined.

This is what happened with Richard Nixon and this is what’s happening with Donald Trump (also read: The Dangerous Case of Donald Trump).

When things get even worst, delusional leaders cling to power as they destroy organizations or whole countries, as it was the case with Muammar Gaddafi.

In Eleven Rings, Phil Jackson says he once told a power-hungry but not yet ready to lead Kobe Bryant:

You can’t be captain when nobody wants to follow you

How true.
Leaders can get a bit more mileage out of followers who don’t fall anymore because tehy are already in power.
But when your followers don’t follow to you anymore, then it’s either you let the tanks roll, or your grip to power starts getting shaky.

I will eventually make an article for despots only.
But it bears repeating again: sadly for the population, the rules change for leaders that have access to the military.

Hated, selfish, and sociopathic leaders can remain in power if they pay the military well, and if they secure the generals’ support (De Mesquita, 2011). 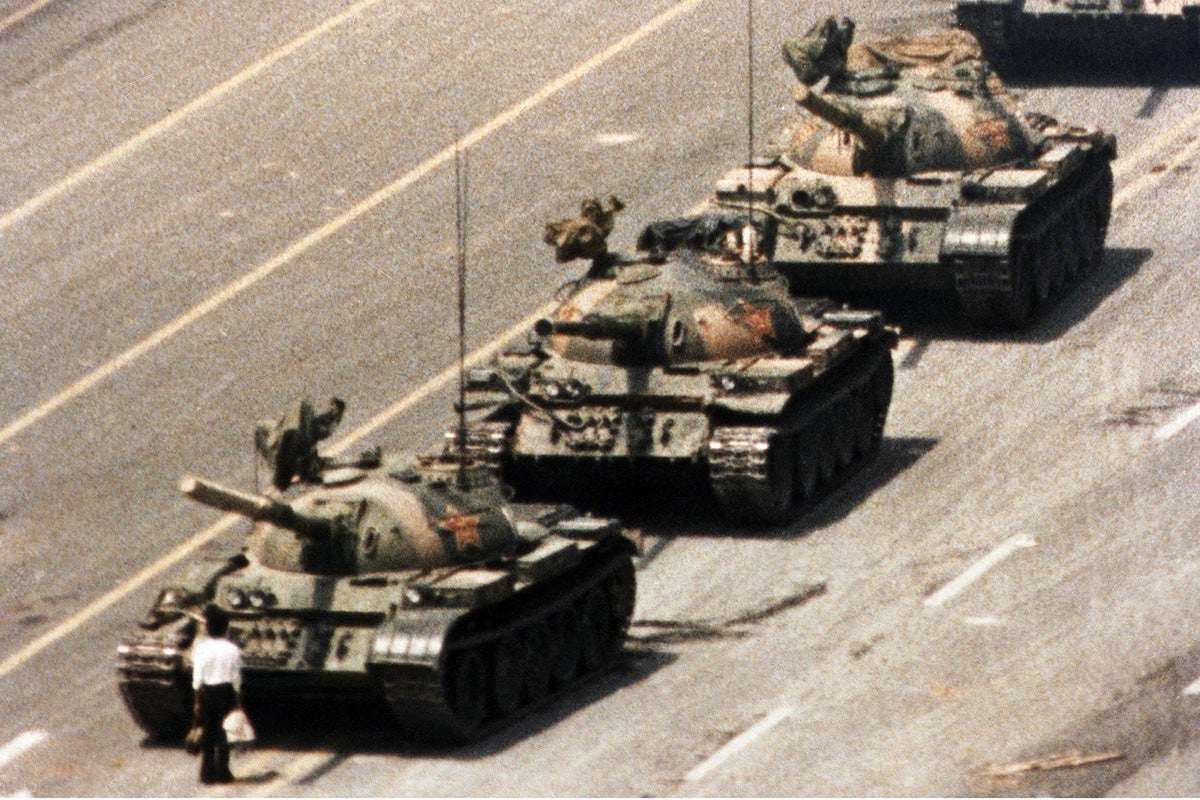 Great picture. But, ultimately, the tanks did score their win for the regime

Hopefully, though, you will at keeping power because the people want you there.
As we’ve already mentioned, it’s usually better fo all. And it’s doable. If you put your effort into charming your followers and doing well for the team, everyone will win -and you will get to keep the power-.

You Keep Power When People Want You With Power

Great leaders know that, ultimately, their power rests with their followers.

And you must earn their trust by delivering, improving their lots and staying true to your values and ideals.
And, ultimately, by showing the way on how to be high-quality person with your own personality.

Great leaders also know that as much as they will stay in power as long as people want them in power, they can also increase their power by increasing their goodwill with the people.

Writes Robert Greene in The Laws of Human Nature:

(us as leaders) must realize that we are actually in a weak position, and we must struggle to adopt the opposite attitude: We expect nothing from the people around us, from those whom we lead.
We are not defensive or sitting back but completely active—everything we get from others, and most definitely their respect, must be earned. We have to continually prove ourselves. We have to show that our primary consideration is not ourselves and our sensitive egos but the welfare of the group.
(…)
With such an attitude, we will notice a very different effect. People will open themselves to our influence; as we move toward them, they move toward us. They want to win our approval and respect. With such an emotional connection, we are more easily forgiven for mistakes.

The true price of leadership is the willingness to place the needs of others above your own.
Great leaders truly care about those they are privileged to lead and understand that the true cost of the leadership privilege comes at the expense of self-interest.

“Privileged to lead”, that’s the key mindset difference between entitled leaders and leaders who build goodwill, are loved by their people and stay in leadership positions for the long haul.

Leaders depend on those whom they lead

In this regard, a leader-group relationship is not that different from a person to person relationship.

How Great Leader Hold to Power

On top of the core pillars that we already saw in the overview of social power, this is what the most beloved leaders do:

Benito Mussolini genius propaganda was one of the first examples of great use of mass media to influence the public.
By showing himself working hard people could look up to him without feeling jealous and resentful for his position: he was earning his stripes (or so it looked, at least).

As Willink and Babin explain in Extreme Ownership, leaders take responsibility for whatever happens in their group and within their mission.

If things go south, leaders shoulder the blame.
Leaders who shoulder the blame hold up to the unwritten leadership contract: I get the trappings of power, but also shield you from blame and troubles (as much as possible).

And if things go well, they pass the credit.

We live in a world -or perhaps we’ve always lived in a world- where facts randomly follow promises.
Duplicitous marketing slogans oversell mediocre products and politicians who promise change and better times often only deliver for their cronies.

But that’s a great opportunity for enlightened leaders to distinguish themselves and causing major upsets even among better-funded competitors.

That’s who Sanders was able to pull the offsets that he’s pulled against the more established Hillary Clinton:

Hillary’s Clinton coarse voice BTW is one of the reasons she has lots.

There are different ways to maintain power, and this article focused on the positive aspect of keeping power: doing a great job as a leader.

This article also stated that power can corrupt.
And the more it corrupts you, the worst leader you become and the harder it is to remain in power.

It’s your duty as a leader to develop the mental checks-and-balances that make sure you stay grounded and never forget that good leadership is, ultimately, about responsibility.

Never grow entitled to power: that’s the easiest way to make people resent you and force you out of office.

You must earn the trust and love of the people you lead and always remind yourself that you are there to serve.
That’s the mindset that will bring you love, fame and long-lasting power (and, incidentally, also make for a better world).