Submissive behavior and body language among humans communicate the acceptance of someone else’s leadership over the environment and/or over oneself.
It a nutshell, submissive behavior relinquishes control and gives power to others.

Albeit there is nothing inherently wrong with submissive behavior, too much submissive can become a problem for those who want to maximize their potential and reach ambitious goals.

This is why eliminating some submissive behavior, or at least being more conscious of it, will result in a net improvement for all those people who overdo submission in their lives.

By the end of this article, you will know clearly how submissive body language and behavior look like in real life, so that you can gain more conscious control over yourself.

The core of submissiveness is deferential behavior towards leaders and more powerful individuals.

Deferring takes many forms, including:

Submissive people aren’t sure what they need to do and what they can do.

They look around because they need cues from the social environment.
They need confirmation that they’re still in good standing with the group and that they are toeing the line.

Most of all, they look at the leader.

Here is an example from The Wolf of Wall Street.
Notice how the underlings look at Di Caprio, the leader, for several times during this scene:

Also notice at minute 1:22. The underling makes a joke and looks at the leader to check his reaction. Then he nods as if to say “alright, I’m done here, take the lead”.

And here is another interesting example from the movie “The Break-Up”.
It’s a split of a second, but notice how he keeps looking at her after he delivers his dominant line:

He sounds like he is dominant and in control.
But pay attention to how he looks at her after he delivered his line and he’s still sipping on his beer. He is staring at her to glean what her reaction will be, which suggests that she has a strong influence on him.
He is not super submissive, but he’s not the leader either.

The dynamics in “The Break-Up” are very common in relationships where the man looks dominant, but where the ultimate power actually rests with her.

There are many situations in life in which you are not the leader. And that’s OK.
However, looking at the leader too often sends the message that you might not have much leadership qualities at all. And that doesn’t bode well for your future, both from a career perspective and from a social power point of view.
In that scene from “The Wolf of Wall Street” they all look like eternal underlings, no matter how much money they make or what their official title is.
And in real life, 95% of the times, the eternal underlings are not the ones who make it into upper management.
To have a great career, you must learn to act more like an executive. In the beginning, look around. But once you understand the politics, the company culture, and the general rules of socialization, then avoid seeking constant confirmation.

1.2. Rotating towards the leader

It can repel people who are afraid or not comfortable with the dominant person (equal charge), but it will attract all the rest (opposite charge).

For example, submissive women, or women who are extremely into their men, move towards their partners with their bodies (or even hide behind their partners when they’re feeling shy and nervous).

Similarly, they will angle their bodies towards the person they are either most attracted to or who has the most social power (which is often the same person).

Notice the meeting between South and North Korean leaders, and how the women move right after the meeting:

Kim Jong Un’s sister doesn’t rotate towards him.
We can speculate she is very independent, she doesn’t respect him much or she does not like him much (but it’s heavy speculation with so little footage).
On the other hand, we can guess that Lee Nak-Yeon’s wife recognizes his leadership over her because she rotates towards him.

1.3. Following the leader and group’s laughing-patterns

Patterns of laughter and smiles are a great indicator of social power in a group.

The social dynamics of laughter are very telling for two reasons:

The latter is an important decision in the group’s social dynamics and submissive people are often scared of taking it by themselves.

When non-leaders start laughing only to realize that the group or the leader is not laughing, they will often stop.

She doesn’t really like the joke and he quickly lets the joke die.
He doesn’t do it too badly because it’s not an abrupt ending, but you could guess from this behavior that he has no strong leadership in that relationship.
For men, it’s particularly important that they don’t let the women they want to seduce dictate what they can or cannot laugh about. Because that will likely kill most of her attraction.

Training Day has one much more obvious example when it comes to leadership and patterns of laughter.

1.4. Laughing at leader’s joke even when not funny

Submissive people will force themselves to laugh when the group is laughing and, of course, when the leader is cracking a joke.

See Power University for an example.

Real Life Check:
If someone around you has done a poor joke, I recommend you arch your lips up just a little bit without showing your teeth as if to say “that wasn’t really funny but I’m being polite”.
Then move on.

Do you remember the article on body language of dominance?

We first introduced there that submissive people close their bodies and make space for dominant individuals.

The same applies to socialization, which is expressed in many forms:

Walking backward is a way of giving space to the person whom we perceive as being the leader.

You can see this in seduction as well, where it replicates a dominant/dominated body language which can be the precursor of sexual submission:

Real Life Check:
This can be a great seduction power move for men.
A “predator-prey” dynamic is extremely seductive when she’s attracted and primed for sexual intercourse.
However, men must be conscious to only pull it in situations where the woman is attracted and feels safe. Because in all other environments it’s outright scary and rape-y (and not in a good way).

When you rush away from someone you communicate that you’re overly worried about bothering or taking too much of their time.

Alternatively, it can also communicate that you’re intimidated or you’re afraid of them, like in this Godfather’s scene:

People who don’t believe in themselves will also cover their mouths, as if to hide what they believe and think.

Sometimes it’s not as obvious, but any movement of our hands in front of our face is often a sign of protective, self-effacing behavior. Keep your hands as far as possible from your mouth.

A dramatized example from Fantozzi:

For Women:
Covering one’s mouth can be a highly seductive coy signal. It’s very feminine and it attracts most men.
It’s also a signal of potential “exploitability”, and we explained how that’s an effective dating strategy.
Women can keep covering their mouth as a strategic tool of attraction, but should avoid doing so when they want to be more assertive and be taken more seriously -ie.: on the workplace-.
Also read: how women can be successful in male workplaces.

People with power are not afraid of looking at people’s eyes.

And that includes the times during which they voice disagreement, when they criticize or when they are making a controversial pitch.

People who feel strong enough to criticize but not strong enough to look into people’s eyes are communicating a personal drive to get things done, but also that are not fully confident in their own power.

Schumer comes across solid, overall.
He has a strong voice, and deliver his opinions with conviction (a strong frame).
But the moment he says “lemme just say something mister president” he does not look at Trump. His gaze is fixated ahead of him and it goes lower.
He communicates two things: that he probably doesn’t like Trump and is not very comfortable with him. And two, that he is in a submissive position relative to Trump (who instead keeps looking at him straight on like a predator).

2.5. Leaning towards the leader

In intimate relationships or in seduction the partner who is more into the other will usually move towards the leader, grab the leader’s arm, or even seek protection behind the leader.

Who moves towards who is also an indicator of who needs who the most. 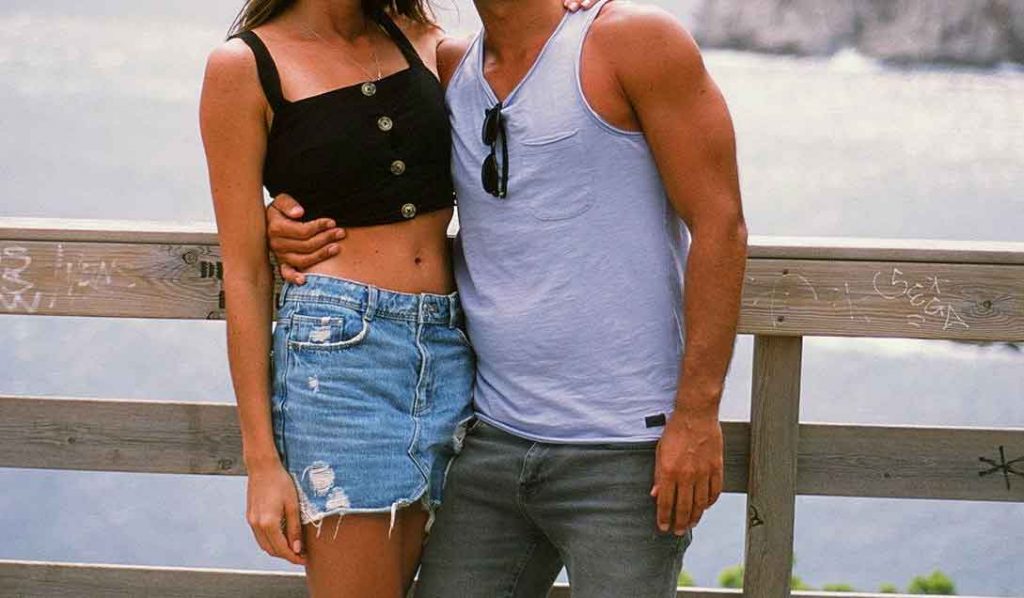 Sexy picture, but it’s him who leans into her.

Insecurity and submissiveness are not the same.

But there is a strong overlap between them.
Insecure individuals rarely are leaders, and submissive people tend to be insecure.

Submissive individuals tend to be particularly tentative and insecure around more assertive individuals.
They are focused on threats, and fearful of causing the ire of the more dominant individuals.

Some examples of insecurity signals:

A risky comment can make or break your social status.

If people back it up (ie.: laugh, accept the topic or adopt your attitude towards it), you’ve just acted as a leader.
If they ignore it or reject it, they just rejected your leadership.

Since risky comments are so consequential in social dynamics, submissive people are afraid of the consequences.
And when they do make a risky comment, they are afraid they might have gone “too far”, and they’re afraid the group might not accept it.
So they look away, look down, close themselves up or “move away” from what they just said.

This is similar to when people lie and then they move away.
Look at Nixon here and see if you notice anything:

See what Nixon does right after he says “I’m not a crook”?
He moves away.
He can’t stand there because, deep down, he knows he’s a crook.
That’s the same with people who feel like they have just said or done something too socially risky: they feel the need to escape and defend. And they do so by moving away, looking away, nervously laughing or closing up their body language.

Look how James Bond does the exact opposite instead: he looks away before delivering the witty remark and then stands behind his words by looking straight into his eyes and holding the pause.

This is a bit like the ostrich move -which doesn’t really happen in nature but you get the point-.

Instead of facing the issue, we’d rather move away and hope the issue goes away by itself.

Milton in Office Space does it twice:

Lowering your head down instead of sideways is even more submissive.

Some body language experts, including Allan Pease, say that blinking is a way of blocking messages we don’t feel comfortable with.

The more we blink, the more we get to remove ourselves from situations and people that make us uncomfortable -or afraid-.

Frankly, I’m not sure the explanation is true. But too much blinking does indeed make you come across as more insecure.

On the other hand, a longer blink-free gaze makes you look more confident.

But while insecurity is situational and changes depending on the environment, low self-esteem is a character’s trait and tends to be “stickier” (but you can change that too).

Please see Power University for more (I need to leave something out for the customers).

This is an excerpt from Power University