How do the most influential people exert soft power to control social interactions?

Why do we conform to some people and not to others?

You will know by the end of this article.

A person’s emotions, opinions or behaviors are affected by others intentionally or unintentionally.

It is indeed a form of influence that does not rely so much on coercion or physical dominance, but functions at a subtler social and mental level.

In some social interactions indeed there is one person who dominates the others at a mental and emotional level.
This person sets the frame of reference of the relationship. Setting the frame means that he originates all the non-written rules for what’s good or not good, what’s funny or not funny, what’s acceptable and what’s not acceptable.

A socially powerful individual wields immense “social soft power”.
At the core, it affects us in a very simple way: we want to be liked and appreciated by him.

When he likes us, he gives us emotional rewards.
When he doesn’t like us, he delivers emotional punishments.

And we bend us over backwards to make sure we conform to him to get more of the former.

In Social Power, this website’s flagship course, I call this social position “the judge”.
I chose the main “judge” because it well summarizes the main ways with which dominant individuals wield soft power: by setting a frame of reference on what’s good or not good, and then by having people comply to it with their judgment.
The soft power of socially dominant individual is to make people act and react based on their judgment.

It’s a soft power because the coercion is limited. The submissive individual is happy to obey those rules.
He wants to be in the judge’s good grace.

How to Control People With Soft Power

Let me preface this right away.

There are no “secret” magical steps you can take and then people will listen you.
There are no combination of words, no magic “abracadabra” and no buttons you can touch.

And to do that, you need to have heaps of value they want to draw from and bask in.

The more value you have, in the more disparate fields possible, the more social power you wield and the more you can influence people around.

When you think about increasing your value, I would welcome you not to think of personal traits and skills as silos because the opposite is true: they are all connected.
Once you raise one: you raise all others:

Just think about it: if you raise your competence aren’t you more confident? You will probably earn more, the ladies at work will want you more, your knowledge will also increase etc. etc.
It’s the same for each key personality trait of life skill: raise one and you get a major uptick on all others.

Frame is a set if beliefs, morals and ethical systems and perspectives with which people look at reality and judge the world -and that’s why the name “frame” makes a lot of sense-.

Why do frame determine who has most power in a relationship?

It’s because of what frames carry with them.
Frames carry a code of moral conduct: what’s fair and what’s not fair.

Basically, setting your frame is a bit like imposing your legal system.

And when you buy into someone’s frame, you are playing by their rules, your behavior being judged based on what they believe in.
Of course, often people don’t set their frames because they “believe” in it but simply because it’s good (for them).

Part of learning social dynamics is learning to see frames and whose frame you are playing by.

As a quick example, watch this scene from Mrs Doubtfire:

3. Make Them Addicted to Your Rewards & Punishment

The socially powerful individual delivers rewards and punishment which are based on his frame of reference and his value system.

In the realm of social influence, rewards and punishment are most often emotional.

This is what French and Raven called, indeed, “reward power” in their classical study “the basis of social power“.

Unhappiness is particularly interesting.
When there is a close relationship -especially intimate relationships- and there is a huge difference in terms of mental dominance, the simple act of being unhappy will be enough to make the submissive party scuttle around to make the dominant party happy again.

This is why women who wield strong social influence in relationships just need to act annoyed to make react and chase after them.
Look at this example from Scarface:

Make Them Prove to You

In relationships where one individual is the judge, the other party often ends up “proving himself” to the judge.

And that makes him the submissive party of the relationship. 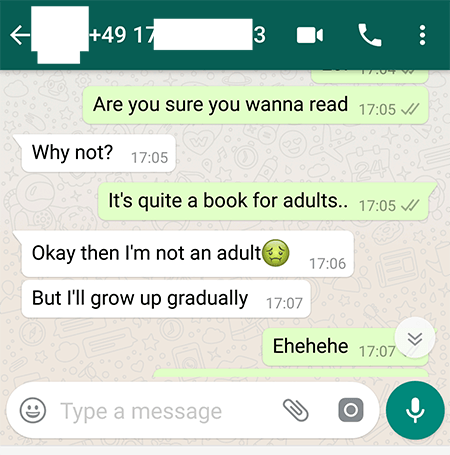 Notice in this example how I set myself as the judge as creating a group of “adults” who read deep texts and she’s not yet there because she’s too young (or worse: not yet mature enough).
That strengthen my position as the judge and her as to having to prove to me she’s “adult” enough. I’ll later tell her I was just joking of course: I’m not big into playing games.

The judge role can move from soft power to harder power by increasing its coercive power with “shaming attacks”.

Shame attacks threaten to ostracize people not just from the judge, but from the whole group of reference, which in our archaic past was equivalent to a death threat.

Shame attacks use emotional constructs such as “evil”, “treason”, “dishonorable”, “not good enough (for us)” etc.

People deploying shame attacks don’t necessarily refer to an actual codified system of laws and regulation of course.
They are often using their frames of ethics and morals instead and they are delivering judgment from an authority position that, often, is self-appointed.

Shame attacks can often push people so much on the defensive that they relinquish any counterattack in exchange for forgiving.

This interview was a whole case of shame attacks delivered from a judge and parent position.

But ultimately, you don’t want to use it because shame is a tool coming from a position of weakness. You can get away with it a few times, and you can even grow your power with it like some charismatic leaders do. But in the long run, it’s more likely to backfire.

Historically, Robespierre leveraged shame and finger pointing for his terror. Same did Savonarola when in the name of religious zealot he had hundreds of secular books and artistic masterpieces burn in the public square of Florence.
And they both ended up executed -both of them were cases of rust in peace-.

Finally, the nastiest social attacks go at the core of our identities and at what we hold dearest.

Our identities differ from person to person, but key traits are common to many of us.
Almost all men for example partial to any attack to their “sense of being a man”.
And almost all women are easy marks for attacks to beauty and femininity.

I’m not saying never to use them, there can be countless situations when any weapon that is usually unfair becomes fair.
But you definitely want to avoid relying on them as your go-to weapon because only nasty people rely on nasty tools of aggression.

Finally, the soft power of social influence usually flows from the person who poses questions to the one who has to answer them.

When one party yields a strong social influence on the other, the questions aren’t just a back and forth or matter-of-factly exchanges of data.
Usually what happens instead is that the person answering is trying to impress the dominant individual -or at least, avoiding to fall from his grace-.

Here is an example from the movie Meet The Parents:

De Niro’s questions are strong and direct. Stiller makes a joke to relieve some pressure but instead of accepting the release of pressure -a friendly but not so dominant gesture- De Niro keeps piling pressure on, culminating with “but you didn’t pick it”.

Questioning can also be hard-core interrogation-style, like in this example from The Wolf of Wall Street, where Di Caprio plays a rather submissive husband.

There is an overlap between the judge role and the and the parent/child relationship of transactional analysis.

And when kids get rebellious in their teens they are rebelling in great part not against hard rules, but against the soft power of judgment.
They want to claim their adult independence and they don’t want anymore to be under the emotional yoke of their parents -often mother-.

In a similar fashion, when you become the judge in adult relationship your power is to make the judged emotionally dependent on your approval.
They will invest and they will be trying to win over your sympathies. Often, they will even try to change or they will on themselves to win your approval.
In romantic relationships judgement power usually goes to women-.

There is an overlap between social influence and the parent role.
Check out this video:

The course I’m referring to is Social Power, which gives you many more tools and practical examples.

When The Submissive Rebels

We saw one example for this one in the article on female control of relationships:

His rebelling is in many ways similar to how a child would rebel to the mother.

However, there are also plenty of situations where you don’t want to be influenced.
A mother who is still controlling your choices as an adult for example, or a manipulator who wants to get something from you.

To overcome social influence you need to:

1. See the dynamics at play

You need to first of all to understand that you are entering a power dynamic where people are trying to take a judge position over you.

This article is already helping you in that direction.
And this video is by no means an exhaustive list, but there are some expressions that scream “I’m the judge” and that often push people on the defensive:

When you see them, don’t overreact and don’t let it go to your head. Don’t ask what you did wrong or what’s the problem. Just reflect internally that they are taking a judge position against you.

Refuse both the extremes of compliance and rebellion: both are child reactions.
You must remain calm and deal with it like an adult.

Social influence and individual soft power are much simpler -and much more powerful- than any NLP language pattern of speech, hypnosis or any “trick” you can think of.
It relies of two major pillars:

The high value makes people want to follow you, be like you and get your approval.
The social skills helps you to capitalizes on that initial goodwill and further increase your soft power.