Why Marriages Succeed or Fail provides research-backed analysis of marriages and relationships, helping couples to succeed and avoiding falure.

“Why Marriages Succeed or Fail” leverages years of research and contains lots of expletive examples.
The examples are not present in this summary.

And do you want to guess what’s a major way to tell them apart?
How they fight :).

Here are the three types:

They’re calm and make an effort to understand the partner point of views and their emotions.
They use a lot of “aha” and “I see” and encourage the partner to share everything.

Validating couples tend to have traditional and defined roles and to be good friends valuing the “we” of their marriage.

Risks: passionless and losing sight of unique personalities for the “we”.
But overall it’s a solid marriage.

Frequent and heated arguments without listening to each other. They’re all about winning.
They value full honesty and independence.

Risks: Can verbally hurt each other or lead to violence in extreme cases.

They minimize conflicts and avoid “unsolvable” issues altogether.
The bond is so strong that it trumps the disagreements.

Risks: They don’t learn to address issues. And they are low on introspection and understanding, which can lead a partner to think their spouse doesn’t really understand them.

These are the different mixes of personalities we can have.

“You” is the first half:

You can feel overwhelmed with conflict engagers and feel their partner is too  combative. You can feel it’s too much when they “force” you to resolve conflicts (instead of sidestepping).

You find your partner argumentative and domineering and they don’t give you the chance to express your feelings. You wish you could work more as a unit and a “we”

You perceive your partner as too detached. You try to get a raise out of your partner sometimes and feel like your need for autonomy falls on deaf ears.

They argue often and use name calling, sarcasm.

They are equally offensive to each other, but without fully engaging their spouse. It happen when two stonewallers are in a relationship and it’s the most likely to breakup.

Gottman says that happiness in relationships is not in a particular style of fighting or making up, but:

Later in the book he gives two more pointers:

If you allow negativity without making an effort for positivity your marriage will get sour.
Gottman advises to make an effort. Think of your spouse in a positive light during the day, for example.

And notice that anger per se is not negative (unless expressed with contempt, defensiveness and criticism).
Couples who divorce and split up fight a lot, yes, but volatile couples also fight a lot. But then make up for it with far more time laughing, joking and loving each other.

Gottman then wonders if it wouldn’t be better to avoid all disagreement and negativity.

He says in the short run maybe yes, but in the long run couples need to hear the differences.
Disagreements and anger might lead to short term misery, but they’re helpful in the long run.

The Four Horsemen of The Apocalypse

Relationships with lots of negativity often have toxic elements which Gottman dubs “the four horsemen of the apocalypse“.
He chose that name because they easily predict marriage dissolution.

There’s a key difference between complaining and criticizing.

Complaining mentions a specific behavior or instance, or something you wish would be different.
They often start with “I”.

Criticism is a global attack on personality or character, and passes a judgement. They often begin with “you” and add “always” or “should”.

You always do that, you only think about yourself

Antidote: complain without blame and make your criticisms specific. Use I statements and express your needs in the positive form. What would you like to see more.

Contempt is the intention to insult, hurt and psychologically abuse your partner.

The partner using contempt takes a position of superiority and wants to make the other feel inferior and unworthy.
When contempt engulfs your relationship you have difficulty in remembering any single positive quality of your partner.
Signs of contempt are:

Antidote: it’s the greatest predictor of divorce and must be fixed. You counteract it with a culture of appreciation and respect.

Play the victim, counterattack or rightful indignation. You deploy them to defend yourself or reverse the blame.
Defensiveness prevents you from solving the problem and making your partner feel heard and cared for.
The partner using defensiveness feels under siege and therefore doesn’t see anything wrong with being defensive, which makes it so hard to invert.

Antitodote: Calming yourself is the first step, then stop seeing your partner’s words as an attack and force yourself to understand and empathize.

Stonewalling happens when one partner withdraws from an argument or interaction.
He stops engaging or physically leaves to convey disapproval and distance.

You could see stonewalling as the opposite of exploding. It’s an implosion and, similar to exploding, does not help your relationship.

Most stonewallers are men (85%) and they often do it not to hurt their wives but while trying to be neutral. However women’s heart rate jumps when their husbands stonewall them as for women it’s emotionally painful (men are not as bothered by wives stonewalling them instead).

Stone walling can compound when the wife kitchen-sinks, such as starts aggressing more and more to get a reaction out of him, starting a vicious circle.

Antidote: let your partner know that you need to take a break. Then calm down and go back to engage her (/him).

Gottman says that the tipping point towards divorce happens when the four horsemen turn our internal self narratives fully negative.

When that happens, we can’t see past criticism to find a solution. We hear a complain and we think “typical of this princess”, or “classic of his ahole attitude”.

When that happens, we cannot avoid defending ourselves and we can’t see any qualities in our partners anymore. Everything our partner says takes a negative connotation.
The two types of impaired scripts:

As long as you feel like an innocent victim of an abuser, you marriage will not improve

Feeling like a victim plus hostility and contempt towards the spouse.
When inner scrips are permanently damaged it leads to vicious cycles of negativity

Flooding is the experience of feeling swamped or “system overload”.

Men get flooded more easily, which possibly explains why men are more likely to stonewall (imploding under pressure).

Gottman says people can become chronically flooded. And that’s when inner scripts get impaired.
The flooded partner ignores positive gestures or see them with suspicion. And interprets negative interactions as “the clear sign of who he really is”.

Flooding is the driving force behind the isolation cascade that leads to dissolution.

If you feel lonely, you need to admit to your spouse how you feel. Let them know you’re lonely and you need to change or you fear for your relationship.

First recognize when you’re flooding. To calm yourself down, breath slowly and deeply.

Take a break for 20 mins and only go back when you’re fully physiologically calm. If you don’t, you’ll take over your partner’s emotions.
It’s important you don’t think of your spouse or of the fight, especially in negative forms. Instead read, work, read a magazine.

Gottman proposes to measure the heart rate and advises the exact percentages at which you should take a break.
I don’t feel it’s helpful for most couples as they won’t go that far. Just keep in mind that you’re only fully calm after you actually feel fully calm. So stay another 15 minutes away.

Start with listening non defensively. Empathize and put yourself in your partner’s shoes.
Avoid any facial expression that convey disappointment or sarcasm,

Gottman says that we sometimes focus on negatives to improve, but we must be careful not to let negativity take center stage.
Looking at the positive also works in relationships as in all other areas of life.
Using lots of praise and admiration is a great way to forestall cycles of negativity and institutionalize virtuous cycles instead.

Changing is not a matter of one-off changes. It’s a matter of repetition: you must internalize the changes (read the power of habits).

With that in mind, here are some key differences between gender:

On average, women are the emotional managers in relationships and the ones to bring up difficult topics.

A few more tips on improving your marriage: 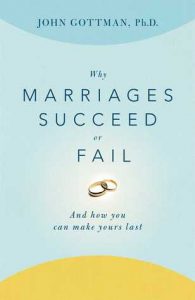 Take Care of Your Relationships
There’s so much great information here that I cannot summarize it in one go. The only thing I’d like you to focus on is to… Focus on your relationship.
It’s one of the most important determinant of your happiness, health and even success.
And the good thing? You don’t just do it for you but also for your partner (and the people around you).

Repetition
There’s so much information that I’d have really appreciated a better structure.

“Why Marriages Succeed or Fail” is another pearl from John Gottman.

The book is too good to summarize effectively and it has a ton of examples that will help you understand the concept to make your marriage great again (and sorry for spoofing Trump :).