It will not take long before you meet a woman who defines herself as “a spontaneous woman”.

Often you will see the “spontaneous girl game” when it comes to dating.
Oh yes, because that is a dating game.

So much so and so widespread indeed that we can even give it its own name: the “spontaneous girl game”.

This article shows you what this psychological game is all about and how you can deal with it.

An Example of “Spontaneous Girl” Dating

How many times have you heard that sentence from people you’re trying to schedule something with?

I was having a couple of beers with the guys yesterday evening, making a pleasant exception to my work schedule and diet regimen.
As we drank and chatted, I asked Mark about Anna, a common acquaintance of ours.

Mark likes Anna, but they’re friends, so it wasn’t a typical case of setting the date.
But don’t get fooled: the dynamics are the same whether it’s friendship or dating.
Dating just happens to be more common and more extreme.

Mark asked Anna for a couple possible dates when she was free and she replied, you guessed it, that “she prefers being spontaneous”. Mark then did a common mistake guys do: taking her words at face value.

So he pinged her a couple times “spontaneously” and, since this was friendship, he was finally able to find a time.

He changed his schedule for Anna, dropped a couple of friends to have some more 1:1 time and then… Then 30 minutes before the “spontaneous date”… She spontaneously canceled.

When someone replies to you they like being spontaneous, don’t read it at face value, but translate it in your head with one of the following:

Be advised that “for a while” often ends up being “for ever”.

I’m not good at reaching decisions. Postponing is my way of deciding.

Spontaneity, on those rare occasions, when it’s actually true, communicates a lack of priorities and a clear vision for one’s life.

Because, guess what, people with clear goals know what to say yes and no to and they don’t let chance and “spontaneity” get in the way of their goals.

#4. I’m politely brushing you off

I have difficulties saying no to people. And you’re so cute I’m afraid you might get hurt. So I give you a future maybe.

Some people have a hard time saying no.

It can be too nice girls, too nice guys or even people with passive aggressive personalities.
And they rather deflect the date than say no right away.

#4. I’m keeping you in the backburner

You’re not my top priority, but I’m keeping you as an option. Maybe you’ll propose to take me shopping. I’d say yes to that?

This is the so called “friend zone”.
Of course, even if you two are just friends, you still want a relationship of equals, so you shouldn’t be OK with her dictating the tempo 100%.

#5. You should chase me: make it easy for me

I’m not gonna block any time for you. Try to ping me and if I’m cool with it and I don’t have my period… I might consider you.

Be advised that the more times you ping and the more NOs you get, the more she’ll never be free (here’s an article on turning around no ladders).

#6. Do more to prove yourself to me

I’m not yet fully open to you but start by jumping through my hoops a bit more first. And if I’m entertained enough I might consider it.

And here’s a rule of thumb: the more you jump through people’s hoops, the less they respect you.

“I like being spontaneous” most of the times is an unconscious power move.
But conscious or unconscious, the effects are the same.

The party who likes being spontaneous is the party with more power. And the party who accepts it is also accepting the subordinate role in the relationship.

After all, think about, who do people want to be spontaneous with?

Who Are Women Spontaneous With?

If you think about it, who do women -or people in general for that matter- usually give the “spontaneous woman” line to?

I bet you those spontaneous people don’t show up late at work saying they like being spontaneous.

Even with terrible bosses, if they care about keeping their jobs, they would at least take care of coming up with a more credible excuse.

If our spontaneous friends are flying on vacation somewhere, they probably don’t show up one hour late at the counter telling them they spontaneously wanted to enjoy a wine before checking in.

And if they have a boyfriend they like they probably don’t tell their boyfriends they want to be spontaneous when he’s organizing a meal together.

As silly as the top 2 might sound, what do all these scenarios have in common?

This Is Who Women Are Spontaneous With

In short, this is who women (and men as well) pull the spontaneity card with:

Not sure however doens’t necessarily mean “no”.
So here comes the juiciest part of this article:

Wrong Ways of Dealing With Spontaneity

Here are the most common bad ways of dealing with the “I like being spontaneous” line:

And chasing after her schedule.

Notice there’s a slight jab in “I like being spontaneous”. And that’s that she’s free and rebellious, and you’re a bit of square.

When you say you like her for that, your are rewarding her for impolite behavior, which is the opposite of what you should do.

When you say “me too”, you’re doing a U-turn: you’re dropping your scheduling ways and conforming to her free-flowing standards.

And of course, women will like you when you make them U-turn, not when they make you change opinions.

You deal with “I like being spontaneous” by refusing to accept it.
Three ways:

In the first case, you accept that either you’re not top priority for her, or that she’s a time waster, low quality woman and you move on.

If it’s a friend and you want to stay in touch, I think leaving it up to her (or him) might be the best way to go.
You simply tell your friend:

You: Hey, I understand that you’re busy and it’s difficult to plan in advance. Tell you what, if you want to meet up, ping me when you’re good to go and we’ll see if we can set it up

This option tells your friend that you are not going to accept any subordinate role.

You expect her to do what both parties are expected to do in a healthy relationship: chip in and contribute. So since she’s the party who can’t make plans, it’s also her who must come up with spontaneous ideas (and not you pinging her).

If it’s a dating scenario, I like the third option best:

I like forcing a decision as you can never be sure who you can move to yes until, well, until you actually push for a final decision.
To force a decision, you reject the spontaneous gambit and pin her to an exact date (or to a no thanks).

Here’s a great way to do it:

You: Oh I totally get you.
I used to love being spontaneous too!
Now I’m a bit too busy for spontaneity though and I’m afraid it might never happen if we don’t plan (and… That could be a pity).
What do you say we set a date instead

I love this one.

It starts by relating to her and pretending you’re going along.

Then it delivers the punch (counter-power move) to re-establish balance in the relationship. That’s when you’re basically telling her she must not have much going on to be spontaneous. But you do have much going on and can’t afford spontaneity.

And then it rebuilds her value a bit to avoid ending on a combative tone, which is the part when you say “I’m afraid it might never happen“.
And ends on a conciliatory tone making it a collaborative effort when you end by asking her to weigh in.

Deliver this line and chances are you’ll get a yes.

And here’s is a successful real life texting example: 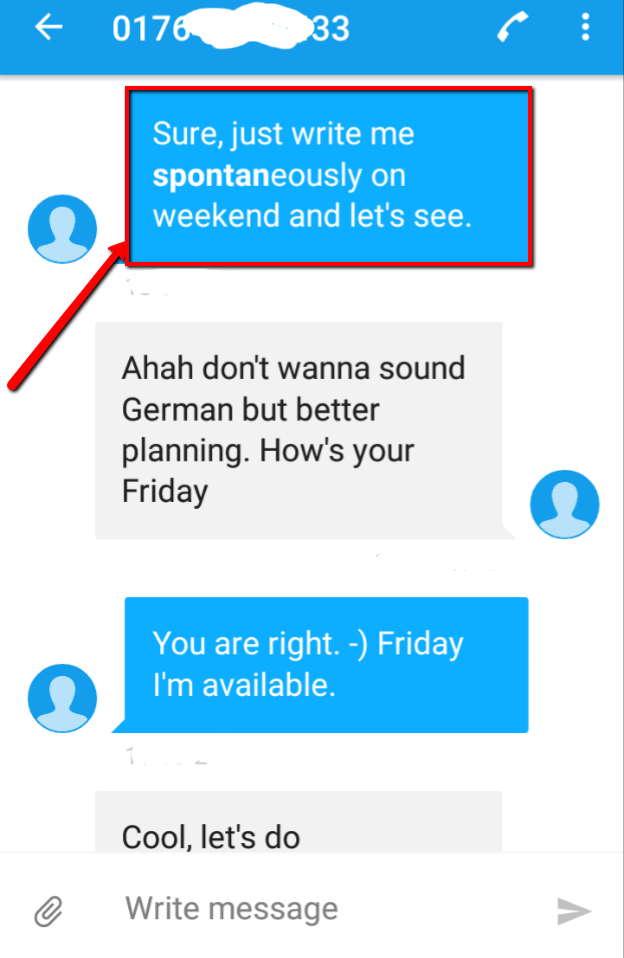 Note: in text keep it short and not too stern: it’s easy coming across the wrong way in text (this is an excerpt of my texting guideline from texts to dates).
Also read a case study on handling flaky girls.

In this article, we saw that “I like being spontaneous” is often either a brush off or a game to put you in the subordinate role in the relationship.

To avoid it, you must not ping her spontaneously but must put the ball in her court or force her on a decision.

Best of all, if you deliver it with a counter-power move saying you’re too busy for spontaneity.. But you’d like to see her. So she better let you know her schedule.

P.S.: for a definitive cure to the spontaneous girls, check out the texting guide. 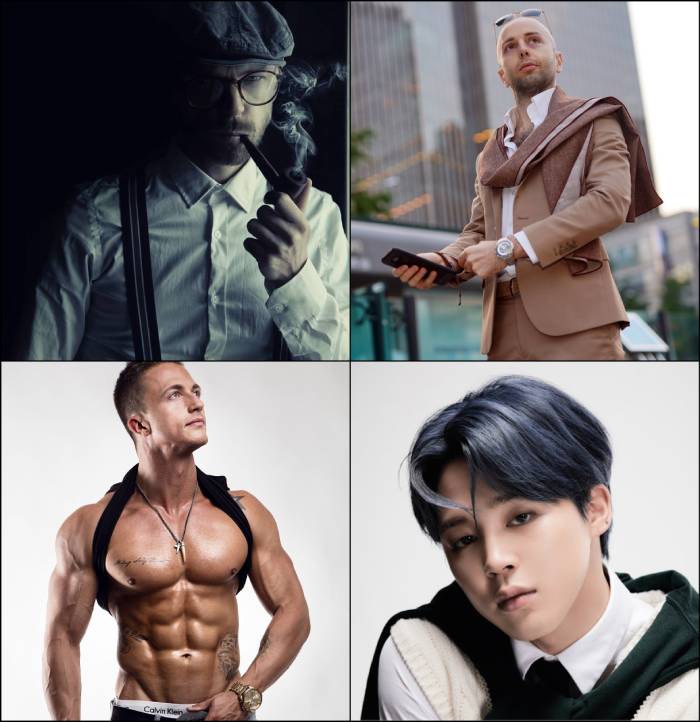 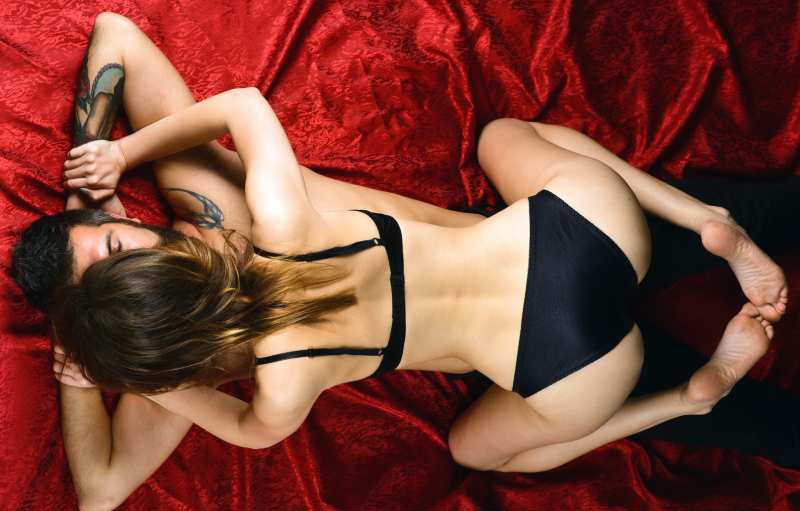 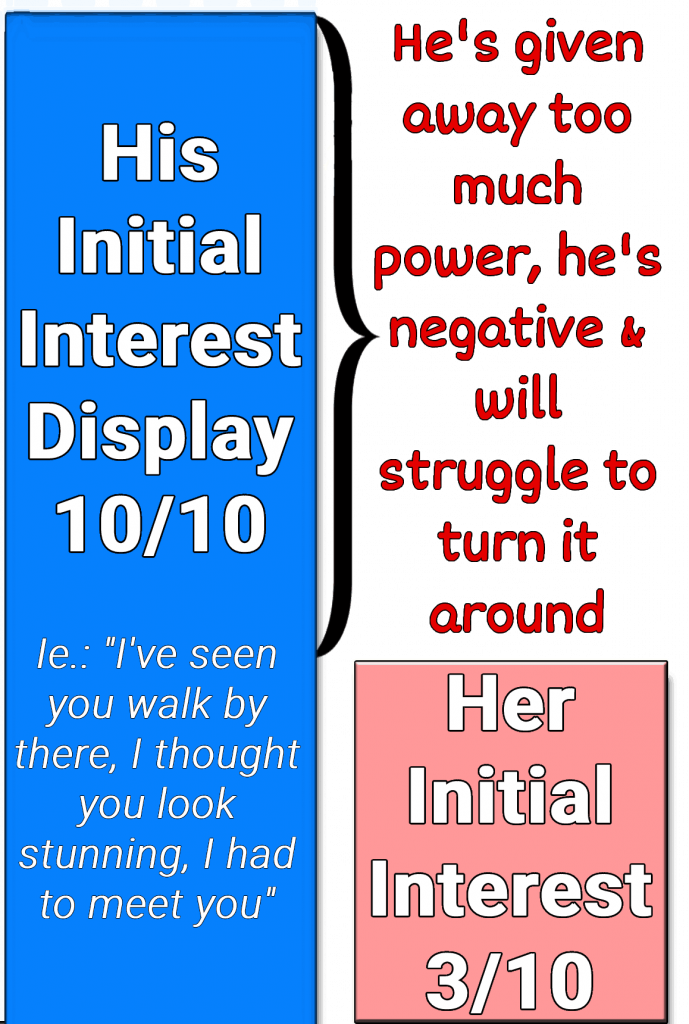