Why Men Love Bitches (2002) teaches women how to date effectively to earn a man’s love, respect, and devotion.

“Why Men Love Bitches” is the feminist way of dating.
It’s good to maintain power, but it’s poor to actually be successful at dating.

“Why Men Love Bitches” focuses on dating power dynamics and relationship control, and teaches women how to play that game to win. That means that “Women Who Love Bitches” is best suited for women who are “too nice”.

There are many great tips and suggestions Sherry Argov shares in “Why Men Love Bitches”.

If I had to pick three that tend to repeat across the book, it would be these:

The overall tone seems to be mostly of “be strong, be independent, and he will fall for you”.
You can read more techniques in:

There are a lot of great insight in “Why Men Love Bitches”.

If I had to mention the biggest “aha” moment for me was Argov’s analysis of nagging.
She says nagging reassures men that their women care. So it doesn’t serve to help women win, but only to make him feel like he “has her”.

I agree with that, but I also believe that there is a strong power in nagging that puts pressure on him, frames her as the judge and, potentially, makes her the prize of the relationship (also read: soft power).

Long term nagging also has the power of sculpting the man the way she wants, and you can read more about that in “how women control relationships“.

What I Didn’t Agree with

The “men VS women” frame is what I dislike.

This is exactly what happened to this reviewer, who started applying the advice in her relationship:

Unluckily, this is very common in the dating advice industry.
The same happens in many dating books for men.
These books end up being misogynists because they frame dating and relationships as battles to be won (see the review of “The Rational Male” for more).

I usually expect my relationships -and of my partners- to seek mutual support and caring.
Because if not, why being a relationship at all?

Indeed, I believe that it’s a precondition for all great relationships to be focused on adding value to each other and giving. That’s what high-quality men and high-quality women seek.
And that’s why I believe that focusing on power and control only lands you average men and women.
You get the men and women who don’t understand power dynamics. The men who do understand power dynamics might still want to fuck her, just out of power, but will prefer different partners for relationships.

And a high-quality relationship demands mutual support, which starts with dating.

You can also read:

You can also see one real-life example here.

I found instead the bitch of “Why Men Love Bitches” advise being more on the bellicose end rather than on the “we’re in this together”.

Should Women Make Him Chase and Invest?

Sherry Argov recommends women to make him invest in them.

That’s common advice in the dating literature for women and there is much science to indeed confirm that it works.

For example, studies show that givers feel more committed to the recipient after giving.
So a man doting and investing on her will like the woman more.
In that sense, “Why Men Love Bitches” is right.

Yet, whether that technique works or backfires, depends highly on the environment you are dating in, and the type of man you are dating.

I go a bit deeper in the numbers in “how to date” but, usually, I don’t recommend women try too hard to make him chase.

Because today there are more high-quality women than men, which gives men an advantage in general.
And that’s even more true for high-quality men.

Asking for big investments upfront drives away the men who have the most options -and those are the ones whom ideally you want to get-.
That’s why I say that this approach works great… For more average men.
I recommend you take a look at “why dating for successful women is harder (and what they can do about it)”.

Why Successful Women Fail At Dating (& How to Fix It)

This is especially true if she is not well versed in asking without giving back in equal amount.
When she dates with “getting as much as possible” in mind, it’s very easy looking like a low-quality woman.
In my opinion, discerning men who are attuned to social dynamics will never be OK with giving and giving without nothing in return (and again, those are ideally the men she wants).

This is why, overall, I cannot fully agree with “Why Men Love Bitches” without adding a few caveats.

Should She Let Him Wait For Sex?

Sherry Argov seems to recommend she lets him wait for sex.

And, again, there are plenty of reasons why that’s a good idea, including the male’s ingrained mindset of dividing women along the “Madonna-whore dichotomy“.

For the exceptions also check out:

And for the techniques on how to actually delay sex, check:

When reviewing “Do Men Love Bitches”, this is an important question:

Well, if we want to give a proper answer, as with most things relating to human psychology, we need to start with “it depends”.

There certainly are men who indeed go crazy over the bitch.
Those men seek to control, domesticate, and dominate the independent bitch.

However, we might argue whether that’s a healthy dynamic to set off.
Because those men might indeed tire once she finally relents, and then lose interest.

So the bitch would condemn herself to a lifetime of constant aloofness and slight distance, becoming in a way a bit of an emotionally unavailable (wo)man.

Some men though will never go for a bitch because they prefer women who are easier to control.
You can read more in “submissive VS strong women” and “are men intimidated by strong and independent women?“.

Submissive Women VS Strong Women: Who Wins at Dating?

With some other men, it’s best to make them feel like they have you and they protect you and take care of you.
This is something Sherry Argov also recommends actually, albeit at times as a tool for getting what she wants.

This is the type of man and relationship that Steve Harvey describes in his bestseller Act Like a Lady Think Like a Man.

In summary: yes, some men are attracted to independent bitches. Her fierce independence can serve as a powerful motivator to make these men pursue her in an effort to tame and dominate them.
On the other hand, that can lead to relationship combativeness and not all men are into that.
Ultimately, the dating market for more submissive and feminine women is larger than the dating market for the bitches (but that’s not to say women should drop their independent ways).

Who Should Read It

“Why Men Love Bitches” can be the perfect book for certain types of women.

I think for women who are too nice, fall in love too quickly or get too clingy.
For these women, it can be a much needed wake-up call.

It will be a tough pill to swallow and some tough love coming their ways, but it can save them from some major heartache.
In that sense, it’s a bit a like the equivalent of the red pill for men, and the corresponding book for men would be “No More Mr. Nice Guy“.

Indeed, the full title is:

Why Men Love Bitches – From Doormat to Dream Girl

Example: The Girl Who Should Have Been Bitchier

For example, I once had a girl who used to drop gifts in my postbox.
Once I told her I got fired and 30 minutes later… She rang at my door with a gift.
I couldn’t even let her come in because… There was another woman at my place.
I can tell you this much: I have never felt more guilty in my dating life than on that evening.

That lady turned clingy and sometimes annoyingly so. And If I had to make her the best gift I could ever do to her, it would be “Why Men Love Bitches”.

On the other hand, I must say that if “too nice girls” are lucky to meet nice guys, or men who appreciate them, then they can be happy without evening learning power dynamics.

I’m glad to say that girl who dropped gifts in my letter-box is now in a long term, happy relationship :).

But Good For Anyone to Understand Power Dynamics

But “Why Men Love Bitches” is also good for more experienced and balanced women who can still improve their understanding of dating power dynamics.

Even I, possibly not the most beginner in these topics, had to learn a lot from Argov.

On top of the insight on nagging, another “aha” moment for me was with men who purposefully push women’s button to make them overreact.
Albeit I don’t think most men do so consciously, that was pure genius insight. 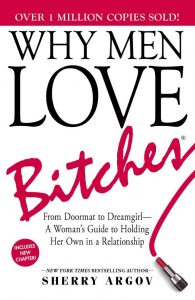 The Beginning of a Genre

“Why Men Love Bitches” has been a trailblazer.

This is the first book I am aware of that brings some “realpolitik”, power moves-style wisdom into dating for women.

It’s the equivalent of “The Prince” in dating.

If you read a bunch of books on women’s dating like I’ve done, you are sure to notice that some authors took Sherry’s core message and repackaged it.

That’s sure to bother the author, I can imagine, but in a way it’s also a sign of great quality and groundbreaking content.

It reminded me of a reporter who once asked Prada’s CEO: doesn’t it bother you that everyone’s selling copies of your products?
I thought that must indeed bother him to no end.

But I was left speechless when the CEO replied:

Read here my own experience with piracy.

That’s why my rating is 3.5: to serve as a reminder that relationships can be more than a zero-sum game.

That warning being given, I recommend “Why Men Love Bitches”, and it’s very in line with the content I put out here at The Power Moves.