The System is a course by Todd Valentine teaching men how to meet, seduce, and sleep with women.
In “The System”, Todd proposes a 5 step process going from open to close and includes many breakdowns of his own interactions.

About The Author: Todd Valentine is a dating coach with many years of experience, both when it comes to dating for himself, and to teaching. He first started with Real Social Dynamics, and then broke off to do his own thing.
He is also the author of “Day Game“.

I agree with everything.

The system is based on the following 5 steps:

I very much like and agree with Todd general advice on which open to use, which he tailors to skill levels.

Beginners should open more direct, or they risk coming across like friends.

Intermediate should be more in the middle, in between direct and indirect.

And advanced practitioner should use more indirect openers and try to communicate their intentions with nonverbal and undertones.

The rationale is that directly stating you like her gives your game away and gives you power away.
You place her above you and make her the prize.
Indirect allows you to withhold more power in the interaction and gives her more space to chase.

Overall, I don’t fully agree that an advanced man shouldn’t go direct. I think that there are situations where you can go very direct sexual and move very quick and you will not lose points but instead kick-off a sexual “whirlwhind romance” effect.
But all the rest is spot on and high quality information.

You don’t want to be too sexual too soon or the question in her mind will be “will I have sex with this guy”.
And that’s a bar too high for the very beginning and you will lose a lot of girls, who will naturally answer “no” even though many of them would have later turned into “yes”.

If you treat them like they’re different, you’ve already lost.

The first step for 9s and 10s is to realize that if all they do is coast on their looks, then they are quite empty.

Many girls who make money off their looks make very little money.
Strippers make more, but they face diminishing returns and are often very insecure.

And many girls who make lots of money on their looks… Well, they are selling themselves.

Dealing with the “blase'” response

Some girls will play the “high value woman” when you approach them and pretend they didn’t see or or hear you.
There are three ways to handle it, says Todd:

The idea here is to communicate that you know what’s going on and that they need to play their game to avoid low value men hitting on them.
With this one it’s like you were saying “hey don’t worry, I know what’s up and I’m as high value as you are”

The exercises “the wall” will be helpful here.

Tease her and find a way to make her react somehow.

The last part of “The System” is for the exercises.

One of the exercises is called “the wall”, and it goes like this:

Talk for a minute to a wall to get used to girls giving you nothing. It will get you used to come up with things to say.

Level 3: talk to the wall from a high value frame, from a perspective that you’re wanted, that the wall likes you, that you are used to great social feedback.

A good chunk of the program is about Todd infields plus another one of his student/teachers (JP).

I think that’s where are a lot of the value is as people can get to watch a few successful dates and pulls with the conversation and Todd’s commentary.

JP’s first infield, the one in the teaser, was true class.
The second one I didn’t like it much, it felt like he was coasting on his good looks and got a bit too aggressive with the sexual intent. It would not have worked as well with a guy who was not as good looking and, most important, she felt more in charge than he was: 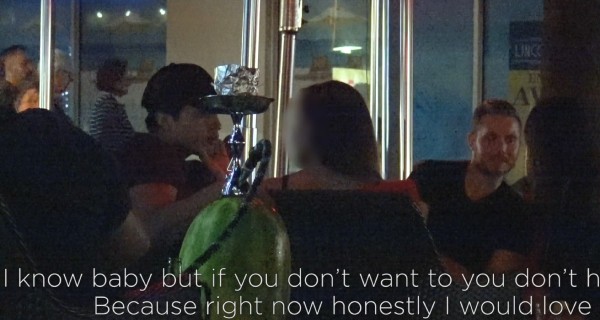 You can see her hand on his face, usually girls only do that if they feel in charge.

Whenever a girl touches my face I know that she is feeling in charge and I always wonder “where did I fuck it up that she now thinks she’s in control?” (and that’s why Joe Roegan gets so angry when someone touches him, especially on his face).
But then again, the guy was younger than her and that’s more likely to happen when she’s got a few years on him. Plus he had sex with her in the end.
I also like the guy: he comes across as very down to earth and his interactions tend to be very natural.

Plus Todd analyzes a few infields of his students, analyzing their mistakes and what they could do better.

Those guys were a bit beginners level, so beginners will get the most “uplift”.
Yet, because of Todd’s commentary as a very advanced guy, even more advanced people can gain new insights.

Todd has been vocal of the dangers of “alpha male strategies”.

In “The System” he comments on one of his student’s videos that it was a dick move to dump a girl right away after she said she had a boyfriend because “she’s a human being”.
And he reiterates the old pick-up mantra of “leaving her better than you found her”.

Well, I like that approach.
And I thikn it’ smore effective, too.

For exapmle, if a girl is talking on the phone the AMS approach would be to tell her to hung up.
But that’s silly, Todd says, because on the other hand of the phone there could a parent, a boyfriend, or a dear friend. And you’re still a stranger.
Instead, he recommends a more subtle approach.

Withstanding social pressure is good, but breaking social norms just so to do it is not attractive (garish clothes, straws in her nose, laying down on the floor, talking overly loud etc.)
The ability of violating social norms is good, actually doing it is bad.

If you go in to have fun, you will naturally have a non-needy mindset.
I’m personally not the biggest fun of this “self-amusing” approach, which if you take it too far leads to more clownish behavior and the girl will take you less seriously.
But in smaller doses, it can be good.

She is actually pushing you low down. She is saying “I admire that a guy lower in value like you are is not afraid of approaching me”.
Also read “hidden power moves“.

Just being around cool people won’t get you results by itself.
It’s not just about being in the group but about your role in the group.
Social media and social circle game should be on top of your core seduction skills, but not seek to replace it.

That’s true, but if you are very close to a very high status person, then you can reap almost equal benefits because he will attract more women than he can take.
In evolutionary psychology this is called the “satellite strategy”, and can work wonders (see Buss, 2013).

Todd comes from RSD, which is based on routines, teasing, push-pulls, lots of laughters, and a lot of “game”.

That’s your typical PUA stuff.
And you can see that a lot in Todd’s method.

He was the best of the RSD pack, in my opinion.
But just sometimes I feel Todd overdoes the teasing and laughing at the girl and he ends up over-gaming.

Sometimes he pushes women who like him a little bit too on the edge, and when you do that you might not able to bring them back. You can turn women off with over-gaming and too much push-pull.
That’s called “self-rejection”, and you can read more here:

Once a girl like you, I think it’s best to set an “us together” frame VS continuing to tease.
Here is an example:

Over-teasing, over-gaming and what I call “gaming past the mark” is something that PUAs sometimes fall into

That being said, she still liked him. And he ended up leaving with her, so overall it was still a successful interaction.

Todd jokes often about the girl taking advantage of him.

One of those jokes is the girl “stealing one of his kidneys”. He wants to convey that they want something from and that they will spend the night together.

I would personally stay away from those types of jokes because they invoke violence and the risk of a serial killer.
Women do think about that stuff sometimes.
And since women are very risk-averse and often have reserves about going home with a guy, I would completely avoid any joke referencing violence or abuse. Sure, it’s a joke, but still I wouldn’t want to put any of that in a girl’s mind.

That being said, Todd is very self-critical and goes back in the videos an analyzes his own mistakes.
That’s a great bonus of his program: you get his own commentary on his own interactions.
And he has a very good grasp of social dynamics, power dynamics, and seduction dynamics.

I think Todd Valentine is one of the best dating coaches around.
I like his approach: rational and level-headed, based both on experience and on solid theory.

And I like how he relates to people and women.
Demands respect, and enforces his boundaries, without going all macho, “alpha male posturing” style.

He also moves beyond the typical black and white thinking of red-pill style dating advice, which has tainted quite a few dating coaches.
Todd Valetine is is free of bitterness and angers which taints some fringes of the manosphere. And yet, he is no idealist. He just calls it for what it is.

Having learned game with the early pick-up theory and having grown professionally within RSD, his style can sometimes come across as a bit “gamey”.
In his YouTube videos he is very grounded, but in his in-fields he changes personality and becomes more talkative, more playful, and somewhat less powerful and less authoritative. That can be good, depending on the situation. But sometimes I feel he might overdo it and laugh too much.
And some other times I feel he might exaggerate with the game, especially the teasing and push-pull.

I really liked “The System”.

And I learned a lot from it.
Most of all, my “stock approach” was very direct, and that’s what I used the vast majority of times.
Following Todd’s advice of trying out different styles, I realized that more indirect is actually better -at least for me and my level-.