Models takes readers into a deep journey of personal and mental transformation aimed at helping men to not only get better with women, but to get better in general.

About The Author: Mark Manson is an author and somewhat of a modern, “bro-style philsopher”.
I consider a well read, well-spoken writer who goes beyond simple dating advice.
He also wrote “The Art of Not Giving a Fuck” and “Everything is Fucked“.

Mark Manson says that a lot of Pick Up Artist advice makes you look and act like a phony (ie.: The Game and Mystery Method).

It hit him the hardest when an ex girlfriend of him told him to “act normal”.

He says there’s a striking lack of solid relationships among PUAs because they’re all about gimmicks and not about deeper human connections.

Manson says there are many variables changing what women find attractive, including:

It seems clear though, says Manson, that women want men with status and power.
Status is shown by how you treat other people, how they treat you and how you treat yourself.

Get Rid of Emotional Neediness

Mark Manson says that your attraction is inversely proportional to your level of neediness.

His definition of neediness is to be more invested in what people think of you than of what you think of yourself.

In dating it means that you should be less willing to alter your thoughts, feeling and motivations compared to the woman. He calls the three of them “investment”.

More importantly, the author says that we often reveal neediness in seemingly innocuous ways but women perceive it at an unconscious level.
He says it’s impossible to be completely un-invested, but you should be less invested than she is.

Manson says that vulnerability is the opposite of Neediness and it’s the path to true and deep human connection (something Brene Brown expands in Daring Greatly).

My Note:
He’s right, just make sure you don’t overdo the vulnerability part and read Vulnerability is Not Power.

Neediness is caring more about the perceptions of others while vulnerability prioritizes and reckons with your own feelings and perceptions.

You’ll feel vulnerable any time you do something that makes you feel uncomfortable and ashamed.
But as you keep making yourself vulnerable you’ll develop more that “not a give a f*ck attitude“.

He says that to become more vulnerable you need to become more attuned to your emotions and learn to express them without inhibition and without being afraid people will like you less.

The author says showing desire is a paradox in that it’s vulnerable, but also a bit needy and lowers your status.

PUA (pick up artists) look for tactics and tricks to pursue her without showing attraction.
But that only works in the short term, he says.

Vulnerability “short-circuit” that issue as men comfortable with being vulnerable don’t behave in a needy way.
And desire shown without neediness is attractive.

My Note:
“Showing attraction mixed with vulnerability” wasn’t super clear for me here.

The Gift of Truth

Mark Manson suggests the pick up ideal of pursuing women without letting her know you’re interested is bogus.

And he says that being honest and upfront is better.

The vulnerable man, being honest and upfront, encourages women to do the same.
The vulnerable man indeed is not afraid of speaking his mind, drawing boundaries and telling her when she’s being out of line.

And that’s great. Quick screening tool and no time wasting.

Many rejections you will get as an honest man are from women who are actually attracted.

But they’re scared of a man who isn’t afraid of honesty, and they’ll reject you -and lash out maybe- out of fear (this is a woman’s mistake I mention in Women’s early dating mistakes).

People are afraid of rejection because they are operating on other people’s truths.

Becuase if you operate within your own truths, what’s there to fear?

Mark Manson says the three fundamentals of attractions are:

Honest living is about doing what you love in life or you are living by other people’s values.

Honest action means that if you’re attracted to a woman the most honest action you can do is talk to her. Otherwise you’re being dishonest to yourself.

Money Matters But It’s Not All

Money, looks and success do matter as they are all indicator of status.

They matter less than many people think though.

Behavior is also an indicator of status.
So the more money and looks you have, the less attractive behavior you need.

The author says most men approaching these women do so because they want to show her off and are hunting for status.

That’s a very needy behavior.
That means that most guys approach these women very insincerely.

Hence Manson suggests to look at something you like about her beyond the looks.

How To Be Attractive

In this section he talks about:

They’re all primer so I suggest you to delve deeper on that stuff separately. Here’s some resources on body languages:

The author says that the needier you are, the more anxiety you have.

Anxiety stems from our unwillingness to be vulnerable.
And the first step to overcoming our anxieties is to understand the pattern we fall into.

How To Take Action

Mark Manson recommends you do not try to suppress your fear but embrace it.

Incremental high volume exposures are better than facing extreme scenarios.
And that means starting small with something you can bear. Than do a lot of it and build up from there.

Ultimately, fear will never go away but it changes shape and won’t affect your sense of worth anymore.

How To Be Charming

Mark Manson says that connecting deeply is more powerful than any technique you could ever use.

Building an emotional connection is what makes the difference.

And he gives us a blueprint on how to do it:

Instead of saying things like “oh I like that too”, tell why you like it and relate it to your life in a way that builds emotional trust.

Taking a leaf out of Leil Lowndes book Mark says that friends speak in statements, not questions.

Questions create the feeling you want something from her and she must oblige.
Instead of questions, use statements.

For example, instead of saying “how long have you been knowing each other” you can say “you guys look like you are old friends”.

My Note: best is mixing questions with statements
I partially agree on the statements VS questions topics. But I disagree that questions (always) mean that you want something from her and that it puts you at a disadvantage. Because the moment she works to reply to your qeustion, she is obliging, and also investing. And those are good.
Many questions in a row is terrible, yes, but so is stacking up a lot of wrong statements.
Plus the wrong statements scream “nothing in common”. I think the best is a mix of questions and statements.

Mark Manson says that men discuss things outside of themselves while women enjoy talking about themselves.

Men should then speak to women about things relating to the two of them. Their stories, their dreams, their feelings.

My note:
that much is true. For conversation in relationships also check Men Are From Mars Women Are From Venus.

Say Your Name to Approach

Mark Manson recommends you never approach from behind and that you smile and give good eye contact.

It won’t matter what you say, he says.
He usually just blurts “Hi, I’m Mark”.

Mark Manson talks about a bit about calling vs texting strategies (also read: How to Text & Text Flirting).

His dating process consists of doing lots of interactive activities and changing venues several times during the date.

The author ends the chapter with an overview of the signals that women send.
Also read:

My Note:
I see the utility of doing lots of things during the date and changing venues. However, I prefer simplicity.
Planning lots of things also communicates lots of investment. And since Manson recommends you pay for dates, also quite some money :).

Err On The Side of Risk

The rule of thumb when you’re not sure when to escalate is to go for it.

It’s better being rejected than doing nothing and not knowing what could have been. 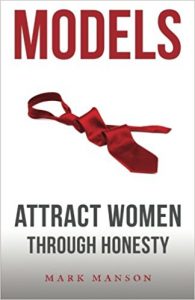 The idea is that you take responsibility roles in what you like doing in your life.

To learn something difficult “jumping at the high end of the water” might not be the best solution.

Better to do something you can manage repeatedly and then build from there.

Models by Mark Manson introduces an honest approach that is quite refreshing in the pickup world. You can see he is a well-read man as he weaves together feelings, attraction and seduction -instead of looking at the latter in a silo-.

Much of what Mark says makes sense. And much of it is also backed by science and, well, reality.

Models is a great dating resource, but it’s not heavy in terms of techniques and processes.

In my opinion, there are also a few imperfections here and there when it comes to accuracy of information (read my comments in blue)

Mark Manson introduces 3 pillars. But the core concepts he introduces end up being much more. Now don’t get me wrong, they’re all great and, indeed, fundamental. But he could have found a better way to summarize them.

Here is my review of Models by Mark Manson:

There are a few inconsistencies though in Models I’d need to flag.

In the book he says he “kissed more than 300 girls” and then he says he has “been with almost 100 women”. In the chapters on first impressions though he says that “of the thousands of women I’ve been with around 90% we clicked right away”.
Which one is which?

In terms of actual experience, “almost 100 women” is not that much for someone who travels a lot. In this AMA sessions on Reddit he lists he’s been with women from over 18 Countries (link to highlighted part).
Personally, I’ve also never been impressed by people who keep track of nationalities either.

The book is very “safe” in the theories it espouses.

These are all family-friendly and “Instagram quote friendly” positions.
And they help sell well.
I’m not a big fan of diluted content to reach a wider audience.

However, that is not to say that those concepts are useless or wrong. They are true.. Under certain conditions.

And Manson does a great job at explaining them.