It has some really great insights and much of this content you would never find in more “official” psychology texts.
But it also has some poorer and unfounded information.

This review of “Practical Female Psychology” will help you discern which from which.

About The Authors: There are three authors, all of them anonymous and writing behind pen names or first names only.
Joseph has read heavily on seduction since his breakup and, as he said, he took several David DeAngelo seminars (I’m not a big fan DeAngelo, see “Sexual Communication” and “Advanced Dating Techniques“).
Franco is a psychiatrist, and that gave me higher expectations for the quality of content.
And the third author is Joseph W. South. Looking at his Twitter, he seems to be a Trump supporter and near the alt-right end of the political spectrum, including taking part in the “no mask” campaigns with retweets of dubious, conspiracy theories supported by “solid” bro-science: 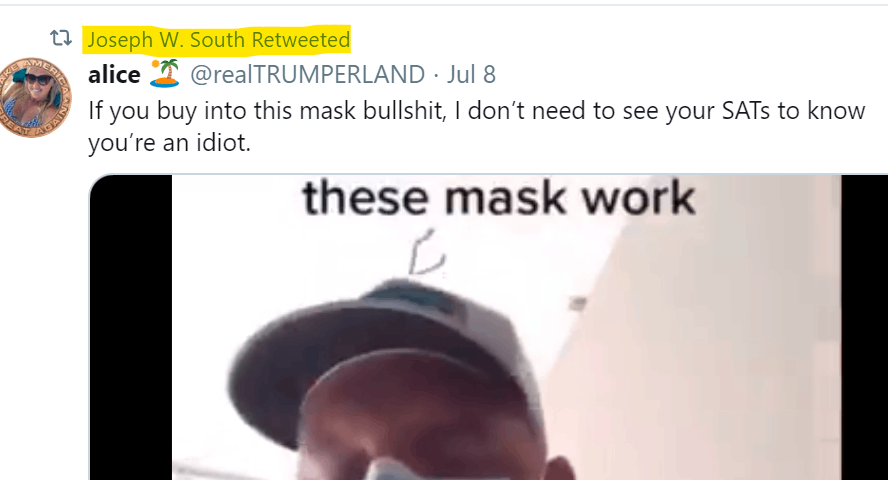 He writes for Girlschase and we have already commented here on the high quality of Girlschase content and products in “How to Make Girls Chase” and “One Date“.

The authors say that women are manipulators by nature.

Manipulation is not always necessarily bad though and the authors say that manipulation can sometimes also support the relationship or the child’s welfare.

But some other times it will undercut the man, and to avoid being taken advantage of (and to avoid having her attraction to tank), he must stop all harmful manipulation attempts.

The authors quote Games People Play, but go much farther than that to list and explain the following games women play:

I very much enjoyed the difference, but the self-esteem part seemed like a huge misnomer.
The authors are not really describing self-esteem but end up describing much broader qualitative categories such as “low-quality women” and “high-quality women“.

The authors say that, at the core, female logic is schizophrenic.

Women with high sex drive present more female logic than low sex drive women and men should not try to repress the female nonsense because they would end up thwarting their very feminine nature.

The authors describe an example of Franco’s wife jumping from one topic to another, forgetting about their movie date and accusing him of enjoying being away from home.
Franco goes along with her and, they note, he missed a lot of movies like that.

My Note: Not a good idea to adapt to
I much disagreed with the example.
It’s true most men would do much better in relationships if they understood female psychology better. But going along with nonsense, disconnected talk instead of letting her conform to you, at least some of the times, relinquishes all the power.
A not leading her to stick to the common decisions seems to me like a failure of relationship leadership.

The authors revisit a very popular topic in the dating literature: the difference between providers and lovers.

in their hearts chicks love to love bad boys, but in their heads they know that nice guys make much better husbands.
This Female Basic Conflict is a schizophrenic duality between a woman’s need for survival, on the one hand, and her need to express her own sexuality, on the other.
This creates a psychological condition whereby a woman’s sexuality is necessarily ambivalent and conflicted.

The authors say that most women will manipulate men to become providers, which I also found quite true.

Lover VS Provider: How to Pick Your Best Strategy

In spite one of the authors writes on Girlschase I agreed that it’s nonsense to tell men it’s best to never pay for the date.
Indeed, I often got laid after having paid for a couple of drinks and I never noticed a major difference in results between paying and not paying. So I never much believed in that.

However, the authors also say that it must be congruent with who you are and what you believe.
You must not change your rules and “buckle under pressure” to pay or you will look like a chump. And I also agree with that.

The authors also list and describe 7 different female archetypes whom, they say, are on top of the archetypes Robert Greene lists in “The Art of Seduction“.

Their archetypes mix sex drive with self-esteem and add on top:

All women have some materialista in them and all of them will try to extract something from men.
So don’t get angry when she shit-tests you and asks you to buy a drink.

I also wholeheartedly agree with the authors when they say that it’s a good sign to have some materialista in them because it means they care about getting the best deal they can get (so stop complaining about female hypergamy). 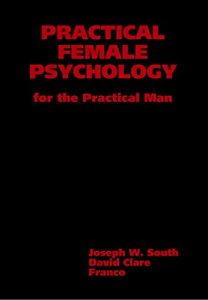 “Practical Female Psychology” presents some genius content.
This is one of them with which I wholeheartedly agree (minus the schizophrenic part because there is nothing schizophrenic about it):

I enjoyed reading “Practical Female Psychology” and I can also recommend it (as long as you keep your critical thinking on).

But I also deeply disagreed with the following:

#1. Made Up Evolutionary Biology

There is a lot of made-up evolutionary psychology in some manosphere corners.

“Practical Female Psychology” is guilty of that, at times.

I’m actually a huge, huge fan of evolutionary psychology and I believe it explains much of our behavior and much of our dating behavior.

Yet, the way many authors make up evolutionary biology reminds me of a beautiful sentence by Daniel Kahneman, author of Thinking Fast and Slow:

Indeed the authors reference the book “Sperm Wars“, which is a joke among researchers (check the link for more information on the criticism of that book).

It’s not the worst case of made-up evo psych, though.
The authors also reference The Red Queen, for example, which is an excellent piece of work.

#2. Missed the Mark on The Madonna-Whore Dichotomy

The authors talk a lot about evolutionary psychology.
Yet, they fail to see the obvious reason why it likely evolved in the first place (because it didn’t fit their narrative).

For example, they fail to consider the Madonna-whore dichotomy might actually actually make sense from a male perspective.

It does make sense indeed for a man to impregnate the easier women and marry the less easy ones.
If the authors themselves do admit that women differ in sex drive and the likelihood of cheating and sleeping around, then the Madonna-whore complex does serve an important male need (which is a point that Robert Wright also makes in “The Moral Animal“).

Or watch this video:

#3. Some Misunderstanding of Dating Economics

Basically, when a female has agreed to be in an isolated venue with a man, she has decided (at least subconsciously) that the male in question is superior in terms of genetic fitness, in comparison to all the other males in her proximity.

That’s not really true: men and women pick partners also based on what they feel is their own sexual market value and how closely they think they match.
If that weren’t the case, average and lower sexual market value folks would never pair up with anyone.
Also read:

#4. Relationship and Seduction Are Not the Same

I believe the dynamics of seduction and relationships are very different.
Also read:

men who become physically unfit in relationships learn very quickly that many women have no compunction against kicking a man while he is down.
As David says, she needs to feel that he is the same strong bastard she was initially attracted to, even when he is sick-in-bed with the flu.

Albeit this might be true in quite a few cases, it’s dangerous to generalize like that as it provides fertile ground for the toxic masculinity and misogynism that are more common in red pill communities.

That being said, “Practical Female Psychology” is not a misogynistic book and the authors espouse a much healthier mindset.
They say:

Our belief is that it’s never appropriate for a man to expect altruism from a woman, only to appreciate a woman’s altruism when she provides it

#6. Sweeping Generalizations Without Any Backing

“Practical Female Psychology” presents lots of sweeping generalization that have no scientific backing and, in my experience, barely any empirical backing.

For example, they mention “The Female Brain” to say that:

Though females may train themselves to act like men, in reality they have a very deep biological urge to be talkative

Sure, women might be on average more talkative than men. But “deep biological urge” to be talkative?
Sure men and women are different, but not as different as books such as “Men Are From Mars, Women Are From Venus“, which the authors also reference, make them out to be.

Also this idea that “women are natural manipulators”, as if men weren’t, is misleading.
Also read:

#7. Advises to Adopt Some Weak Frames

And I found some typical “alpha male caricature” stuff that ends being more harmful than helpful.

Wife: Let’s go out to eat
Man: I like the way you think. Grab your coat and keys, you’re driving. Wife: Where are we going?
Man: (Spins her around) We’ll know when we get there!

The authors say that men should learn that statements such as “let’s go out to eat” are tantamount to “I’m bored, entertain me”.

Which, sometimes… could be true.

And it might even be true that women are on average more childish than men.
But generalizing to all or even most situations is the fruit of the toxic masculinity mindset which wants to see women as “silly and cute” and who are not worthwhile partners for a more serious discussion.

Of course, there are times when women love being treated as silly and cute.
But likely not in a matter-of-fact conversation about where to go for dinner (especially if she’s driving, doh!).
That’s silly of him, not of her.

Furthermore, if she “wanted to be entertained” and he’s going out to eat just to “make her play”, that’s really low-quality of him.
In the example above he is fully buying into her frame and relinquishing all his needs. A busy man shouldn’t have too much time for playing around.

Albeit I heavily criticized “Practical Female Psychology” for its pop-psychology and its made-up facts, I also have to praise it for the many pearls of wisdom it presents.

I even took something away for my Dating Power Dynamics ebook, which is the greatest compliment I can make to the authors.

Many pathological male reactions that can be observed within couple relationships are in fact a desperate defense mechanism, employed by men who have no skills with women.

This stuff is true, but it’s not what you will find in researches, studies or more scientific books like the ones from John Gottman.

There were a few lines that really got me laughing.
For example:

Female Integrity To many men, the very notion of female integrity is an oxymoron of the highest caliber. Right up there with “military intelligence.”

“Practical Female Psychology” reminded a bit of “The Rational Male” and of Red Pill philosophy.

And by that, I mean that it has some top-notch, very insightful content, mixed with some nonsense, generalization, and unfounded personal conjectures that scream “bro-science / pop psychology“.

To recognize which is which you need some good personal experience with women and some good understanding of psychology.

This review of “Practical Female Psychology” will help you separate the wheat from the chaff so that you can safely read the full book and get the most out of it.