And is it even true that men like submissive women?

This article will answer those questions and give you advice on how to date effectively.

Submissive VS Strong Women: The Difference

First of all, let’s see what’s the difference.

Needless to say, there is no mathematical formula or an exact mix of ingredients that “certifies” submissiveness.

That being said, here are the relevant traits of submissive women:

Not all submissive women are feminine, of course.
But femininity comes more difficult for strong women and easier for submissive ones. So from now on, I will use “submissive woman” and “feminine woman” interchangeably.

Strong women tend to be:

Strong women are comfortable with:

Strong women tend to be more independent, at least in appearances. So from now on, I will be using interchangeably “strong women” and “independent women”.

Of course the two categories are a simplification.

And everyone sits on a continuum, not on polar opposites.
The majority of women cluster around the middle so they are either “slightly strong” or “slightly more submissive”.

However, don’t throw out the categories just yes. They are still helpful to understand the differences.

Should You Be More Submissive?

Should you be more submissive?
Or maybe more independent?

Be Femine! No, Be Strong!

For example Act Like a Lady, the most popular dating book for women, is in the “be feminine” camp, and it has a chapter called:

And Why Men Love Bitches, in the “be strong camp”, is subtitled as:

From Doormat to Dreamgirl

Where doormat is the girl who is “too nice” (and submissive).
Only a few of the best dating resources espouse a happy middle.

Now here is the other twist:

Why?
What’s going on there?

In my opinion part of the reason is that women who write dating books have been burned themselves and have a grudge against men.
The same happens in the male’s camp of course, where men schooled in the “Red Pill“, share rather misogynist views and “strategies”.
And this is one of the reasons why I recommend you don’t take relationship advice from dating authors.

But the main reason, is a bit more perverse:

Why Some Women Trick Other Women

The other one is, guess what? The manipulative way of increasing one’s own appeal is to lower the appeal of other women.

Women suggesting other women to be stronger and more independent are (subconsciously) trying to make other women less competitive and appealing.
And by decreasing the appeal of other women, they automatically increase their own sex appeal.

Does it seem too far-fetched?

Just ask yourself this: have you ever heard a woman telling another woman to be more feminine?
Exactly, me neither.
Albeit, as we shall see, being more feminine is obviously the most competitive position to adopt in the dating marketplace.

So yes, there is much manipulation going on with women telling other women to be strong and independent.

Why Most  Men Don’t Give Great Advice Either

So does that mean men are right telling women to be more feminine?

When men complain about women being too feminist, masculine, or independent, they are often complaining that women are too independent for them.
They take issue with not being able to control their women, but instead of looking in the mirror, they go for the good old finger-pointing.

And of course, men also have an obvious interest in making their dating options larger and more palatable.
By telling women to be more submissive, men seek to increase their own dating options (as well as dating pleasure, since submissive women make for better relationships).

Yes, you got it, it’s just another form of cultural manipulation that serves to fight the infinite sexual war.

The Truth of Strong VS Submissive

I don’t think it’s easy or even fair to pick a “winner” between strong women and submissive women.

But if we strictly define “winner” as “having more options”, then it’s clear that submissive women have more dating options.

Mathematically, then, submissive women naturally have more options.
You can see this in the picture below.

The submissive woman (pink-clad angel on the left) is only at odds with very few super-submissive men. And she can date almost any man (green arrow to her right).
The strong woman is at the opposite end of the spectrum though. The pool of men she’s interested -and who are interested in her- is much, much smaller (only a few of the most dominant men).

This has been proven and confirmed by many pieces of research:

However, there are a few caveats:

#1. Both Extremes Are Unattractive

In some areas, there cannot be “too much of a good thing”.

But as per law of optimum balance, for most things related to humans, there often is such a thing as “too much of a good thing”.

So it’s worth noting that whenever a woman goes too far in each direction, either too independent or too feminine, it’s usually unattractive.

One of the reasons Hillary Clinton lost is because, in an effort to look more dominant, she ended up forgetting to be a woman in far too many instances.

And at the other end of the spectrum, women who overplay the submissive hand, end up being annoying to men as well:

Her: (mature woman acts like a baby caricature who can’t function without a man)

If he hasn’t had sex with her yet, he’ll immediately want to f*ck her. But later, it will become annoying.

I highly recommend this article on dating balance:

Why Balance Is Most Seductive

Yet, often, there is a tendency for people to cluster around similarities. And thus, men also tend to prefer women who are not too far off from their level of assertiveness.

#3. Both Types Can Be High-Quality Women

It’s not a question of quality.

What Should You Do

Does this make sense to you so far?

We covered quite a few topics and this was not the simplest of all articles.

Let’s focus now on the practical applications of this information.

How can you use this information to become an even higher quality gal?
I would say there are three major lessons learned here:

1. Stay Away From Extreme Strawmen

First of all, drop all the strawmen stereotypes.

2. For Maximum Appeal, Err On The “Slightly More Submissive”

Generally speaking, men maximize dating effectiveness by being slightly more on the mannish, high-power, dominant, and high-leadership side.

And  women, of course, maximize dating effectiveness by being a bit more on the feminine and submissive side of the spectrum: 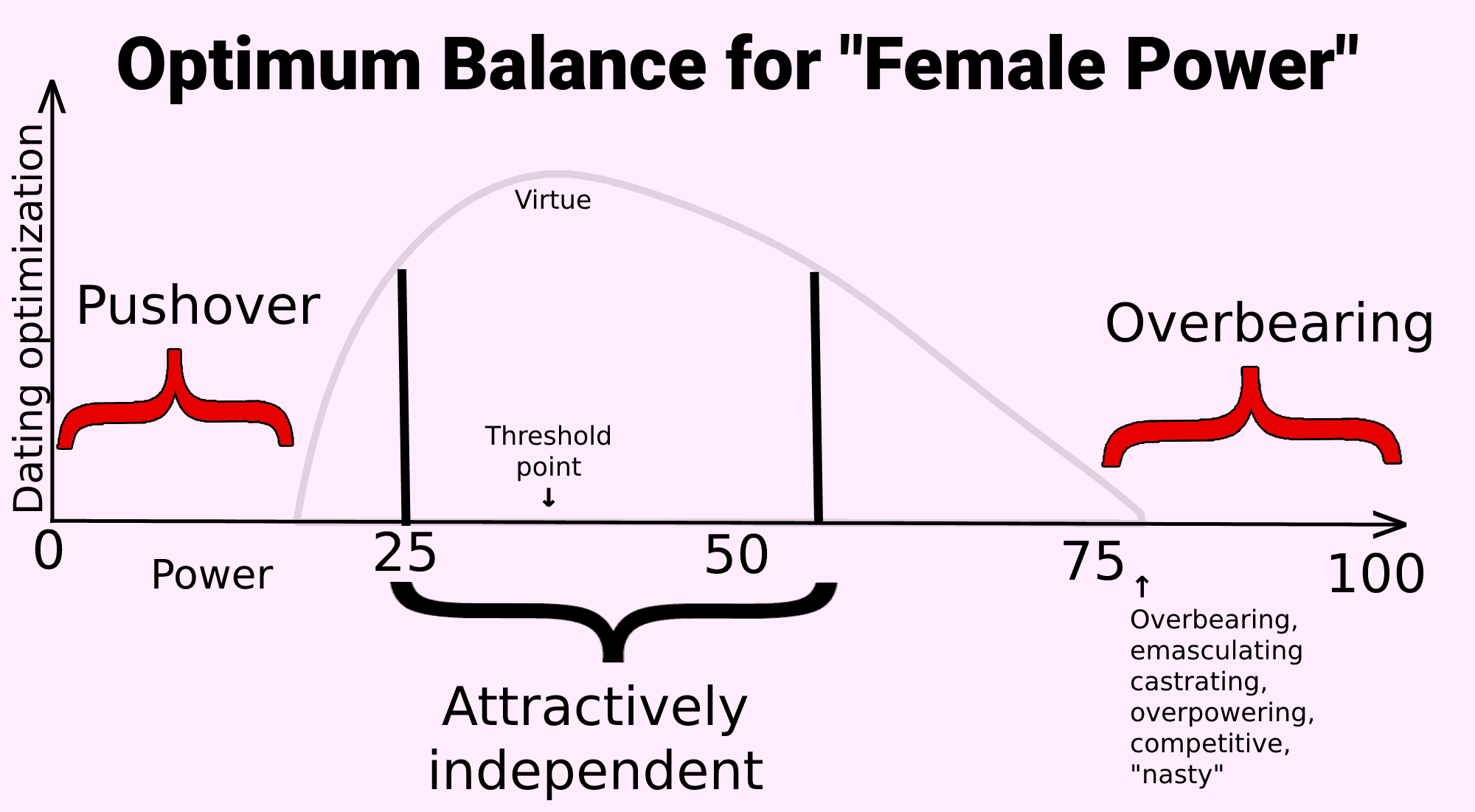 3. Tweak Your Style, Don’t Change it

What you should do depends a lot on where you’re standing right now (and what kind of men you like).

Best of all, in my opinion is to embrace your natural disposition and tweak it if needed.

If you’re too submissive and your man is doing whatever he pleases without respecting you, then some assertiveness training can help.

And if you are too on the strong woman side, you might gain from becoming more feminine and more accommodating.
This is especially true at the far end of the strong spectrum where the attitude is that “I’m not gonna be nobody’s woman“.
That attitude shrinks the dating pool to a puddle.

4. Collaborate With Him, Avoid Power Struggles

If you’re a strong woman, keep this in mind:

If you insist on dating on your terms, you will only end up with submissive men.
That’s OK if it’s OK for you.
But if you meet a man you like, you might want to consider not to get into a struggle for control against him.

This is especially important if you’re a gal who likes dominant men.

Indeed, the three top seducing strategies we reviewed, all use a hint of submissiveness.

5. Do Display Submissiveness to invite Approaches

Signs of submissiveness and helplessness lower barriers to approaches.
Acting submissive elicits approaches from more men, expands the pool of potential mates, creates greater opportunities for choice, and ultimately increases the quality of the mate obtained.

Yes, it’s not just a question of quantity.
Strategic submissiveness can actually increase the quality of mates.

Of course, that’s also more likely to attract men who feel like it’s going to be an easy lay, or that she is going to be easy to control and discard.
So you must be watchful when deploying that strategy.

Submissive women don’t mind independent women because they are not as competitive.

It’s from the strong women camp that the flak gets more intense.
Independent women resent more feminine women. And they also resent men who prefer feminine women.
All that flak is mostly out of self-protection. But it’s an attitude that adds no value whatsoever to either you or the world.
It only poisons you and it looks spiteful.

If you’re more on the independent side, avoid calling submissive women “weak” or “pushovers”.
And see if you can learn a couple of things, instead.

Women Aren’t Going To Tell You!

Do you know the Bruce Lee quote:

What does that mean to us?

It means that most women in the west will say, and maybe even actually believe, that they are independent.
And most women in cultures that prize (or force) women into traditional roles, will say they are good, traditional housewives.

This means that you have to look at how they behave, not to what they say.

As a matter of fact, many women who flaunt their independence might as well as try to cover up their lack of confidence and independence, which is a phenomenon called reaction formation in psychology.

This was a bit of a complex topic.

Was it clear enough? 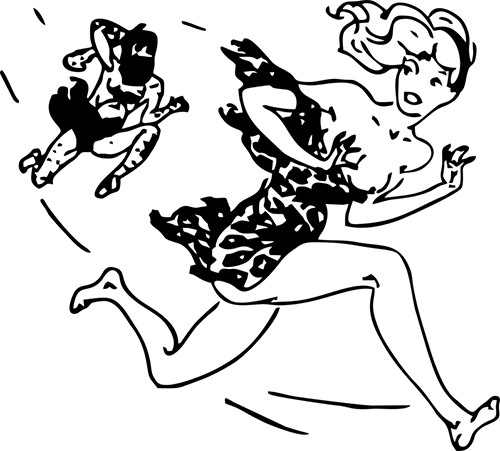 2 thoughts on “Why Submissive Women Beat Strong Women In Dating”