Get the Guy shares shares tips and techniques for women to help meet more men and date effectively.

Get The Guy Summary

About The Author: Matthew Hussey first started out as a dating coach for men in the then budding “pick-up scene” and later transitioned to coaching women.
He says he’s qualified to teach women how to get guys because he’s spent years coaching men in dating and he knows how men think.

Part I: Find the Guy

1. Put the Odds in Your Favor

They think it will somehow just happen, or that if it’s meant to be the right guy will just somehow materialize.

He urges to drop that mentality, build a lifestyle where you meet tons of new men and give as many men as possible a chance.

Matthew Hussey advises an old technique around the social improvement field: says yes every time, to every invite.

On “how to work a room” Matthew suggests to stop and stand when you enter into new venues. Take in the environment, see and let yourself be seen.
That author tells a story of a club owner he met and suggests you should adopt the “owner mentality”.

My Note:
The “owner story” is popular in men’s dating advise. I don’t it’s a good strategy for a woman: it’s too overbearing.

Being a Woman of High Value

Hussey says that getting the guy starts with yourself.

The author concedes that “high value” is relative, but certain traits are fixed. These traits are:

Self Confidence
Hussey says that a high value woman is confident in her own value and knows what she wants.

She is also confident in making her needs clear when they’re not being met and is able to walk away from relationships that do not fulfill her.

She is unaffected by superficial things and is neither intimidated nor overly impressed by looks, money or high status.

My Note:
True, but don’t overdo it. Like Harvey says in Act Like a Lady, many “strong, independent women are also lonely”.

On the other hand, the author says, low confidence and uncertain women are doing things to please others.

A confident man will lose interest in an uncertain woman, and men can always sense when a woman is uncertain about herself.

My Note:
This would be the “nice girl” of Why Men Love Bitches (read: better strong woman or submissive woman?). One note here: well placed insecurities can push the “need to protect her” button in a man.

This is the biggest female misconception:

Contrary to some other authors of dating advice for women (for example: Power of the Pussy, He’s Not Into You) Hussey recommends you do approach.

Matthew Hussey describes a few ways a woman can start a conversation.
He says you should look at the guy first, maybe for half a second, and then smile the second time you look at him.

Then make it easier for him to talk to you by getting closer to him.

Matthew has a terrific piece of advise when he says that woman should never be easy, but the first ten seconds of a conversation, be easy. Give him a chance.

“Pass the Test”
Ask a question (for example: what type of drink you should order).

Then depending on his reply either say “great you passed the test” or “oh that’s a pity, it would never work between us“.
The author says he will automatically think “yes it can work and I will prove it to you“.

My Note:
This is another typical man’s pick up technique. The risk is that the guy will see what you’re up to, know that you’re into him and label you as a big of a game player.

Seed the Date
Matthew Hussey says that you don’t really ask for a date, but seed the idea. For examples you could say

“All the guys I know keep telling to try (name of popular restaurant)”.

When he says he hasn’t tried it, say you’re the only two who haven’t been there yet and you should go.

When you’re leaving then you say something like “hey, I gotta go, lemme leave you my number and maybe we can do something sometime“.

Part II: Get The Guy

Playing Hard to Get
Matthew Hussey says that playing hard to get is a terrible strategy long term. Pretending to be always too busy or too aloof will only get chasing you the most undiscerning type of men.

My Note:
I agree here and I’m glad he says it. Read how to get high quality men with mutual escalation.

Matthew Hussey says that waiting X dates before having sex takes your focus into game playing and away from the most important thing: building a connection.
Sex should happen when you make an emotional connection.

The author says that waiting too long is also a mistake because he will feel like he’s not important to you sexually. And men do get their validation through sex.

My Note:
couldn’t agree more. Hussey is one of the few authors to nail this point. Also read why you should not let him wait for sex.

How to Spot “Only for Sex Guys”
Hussey says that if gets too emotional or persistent when you deny sex, you shouldn’t date him again.

Denying Sex
Matthew Hussey says that a guy doesn’t mind waiting for sex if you do it in a tactful way.
For example if he calls you late at night for a booty call, you deny but there’s no point in “punishing”. What you do instead is to suggest an alternative.

My Note:
I fully agree. Also read: how to reject sex.

Why Hasn’t he Called?

Matthew Hussey says that some misconceptions the guy hasn’t called yet is because he’s intimidated, because he doesn’t want commitment or because he’s only after sex.

The real reasons, Hussey say, are that she was one of these:

My Note:
I disagree with the ” too nice and no challenge”: he would still want to have sex with you.

How to Be The Woman of His Dreams

These are the crucial aspects for being the woman of his dreams:

Matthew Hussey says that your man should know that you derive complete sexual satisfaction with him.

Hussey says that you should make your man feel unique, that you would choose him no matter what.

Matthew says you should make the man feel like you need him.
Being independent is what makes a woman a high value woman, but not giving him any chance to add value or help you emasculates him.

The author says that supporting him and making him feel like you believe in him is another central part in keeping a guy happy.

Is he Mr Right?

Matthew says that two values are the most important in guaranteeing a long term relationship:

If You Want him to Commit

And then adds that you should be careful to over-commit and give too much too soon.

The Girl that Made the Author Commit
Matthew gives a funny and great example of him telling a girl he wasn’t going to commit.
Little did he know, not long after he did commit. How did she do it? She kept cool when he said he wasn’t feeling like being in a relationship.
Then she lowered him in the list of priorities, but STILL was great when they were together. That made the trick. 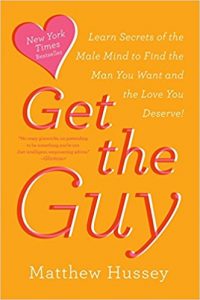 Of all the authors in the women’s dating literature space, Hussey is probably the most original.

I believe a big reason why is that he comes from men’s dating space, and he beings a lot of ideas from there that were not previously present in the women’s dating literature.

The author has many many great insights that many other authors -especially female ones- don’t have.

For example, many female writers fail to stress that you should reject his sexual advances tactfully.
Or that for most guys, being single means having little sex actually :). 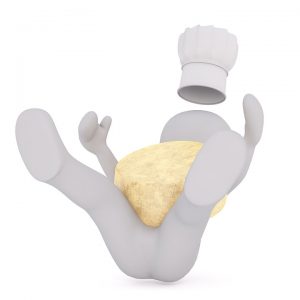 The book is not overall cheesy, but some parts are (bit reminiscent of of The Game and The Mystery Method).
Some men will see you like them but are hiding behind games.

Some of the advise is man dating advice swapping “she” with “him”. And sometimes that’s not ideal.

Some of Hussey’s suggestion to be a challenge can start a silent battle dynamic.
For example he suggests to tell the guy he’s so lucky  to be with her. That’s not good because it starts a “who’s lucky/better” dynamic (check: 4 communication mistakes men do in relationships and combative relationships).

There’s quite some up-selling in the book.

And, beyond the book, I find Hussey’s marketing to be more geared towards clueless consumers rather than smart women who are in charge of their lives (see here a dating for successful women).

See here an example from the mailing list, which seems to me more aimed at selling than providing information (albeit the two are not necessarily mutually exclusive): 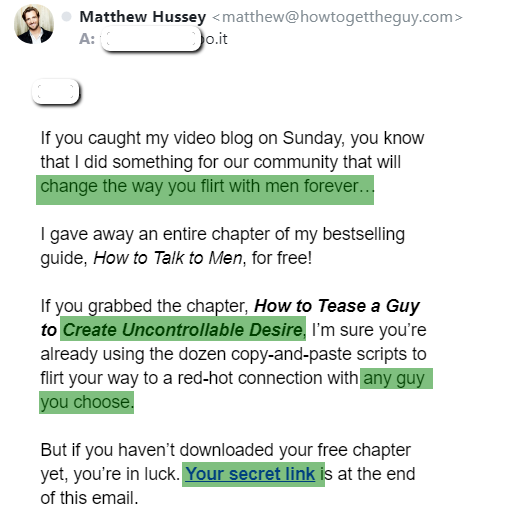 And once you click on it you get a video vastly overselling the results:

Hussey talks about “getting any men to do as you please”, “like mind control, but better”.
In my opinion, this is an unethical approach to business. And it makes me suspicious about the quality of the product, too.

Get The Guy Review

Get The Guy has solid content and lots of good information.

Just a bit cheesy at times and I would warn female readers to avoid the more “male pick-up style” advice because that would make them look less feminine.

Get The Guy on Amazon.